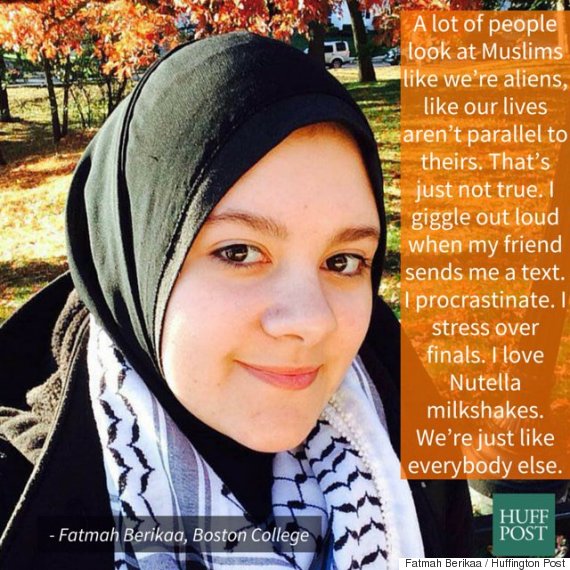 At Boston College, a Jesuit Catholic university where 70 percent of students identify as Catholic, Fatmah Berikaa says she is the only student who lives on campus and wears a hijab.

Berikaa, an Egyptian-American who grew up in Massachusetts, says she chose BC for its academic programs, its friendly campus and its financial aid. She lives in a dorm on the Upper Campus with other first-years. Berikaa hopes to teach and is studying secondary education and English, with a focus in English as a second language, and minoring in Arabic.

Berikaa talked to The Huffington Post about her experiences on campus -- what she worried about before starting at the school, how strangers approach her with questions, and how she manages living in a dorm and squeezing in prayers between classes. Here's her story, as told to Alexandra Svokos:

I was super worried about attending a Catholic university. I thought I would be the only Muslim on campus. We have a Facebook page for every class here, and I’d scan it looking for names that sounded Muslim, just to get an idea of what to expect. I met a few on Facebook before coming, but I met a bunch more once I got involved with the campus’ Muslim Student Association [MSA].

I’m one of five hijabi students on campus -- women who wear the headscarf -- and I’m the only one who actually lives on campus. Islam is a big part of who I am -- it’s kind of, inside and out, part of my identity -- so I always feel pressure, like I’m essentially representing my religion all the time. It’s hard sometimes, because that’s 1.6 billion people who can be judged based on how I’m seen. I don’t want people to see me having a bad day and generalize that to the entire population.

On campus, people are really open and friendly. People walk up to me and start asking questions. Sometimes people are really offensive without even meaning it, but I’d rather have them ask me outrageous questions and get the right information than go on believing something that’s not true.

A lot of people start off by commenting on the headscarf. They’ll talk about the color, or ask to feel it. And then every once in a while you’ll get ridiculous questions, like “Can you ever take it off?” I don’t shower with it. For the record, that’s not how it works.

I teach ESL in Boston as part of a volunteer program, and a lot of the students there are recent immigrants from El Salvador or Colombia, and they don’t have big Muslim populations in those countries. They’ve never seen a Muslim, so they ask me a lot of crazy questions, like “I heard that men can have four wives...” It’s really sweet that they make the effort.

I love when people ask questions, because it shows that they’re making the effort. So I want to reciprocate and make the same effort.

Once I got here, I found that a majority of the people that I was meeting came from really diverse backgrounds, and that’s great. But it’s also nice spending some time with people who are on the same page as you. 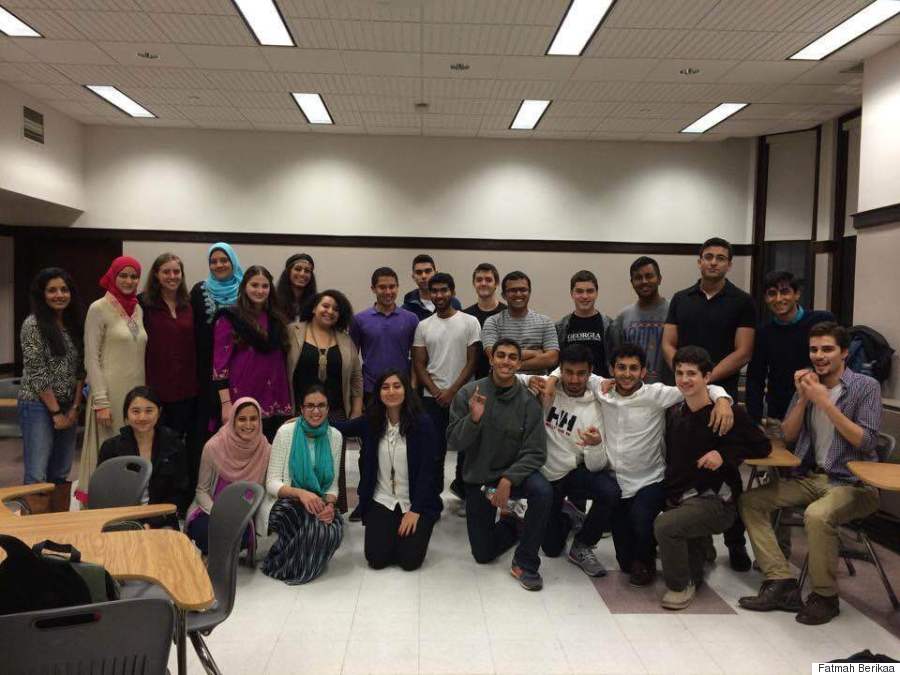 I can’t even begin to describe how much I love our MSA. We’re all going through the same things, so everyone is supportive. We do a lot of things together, too. We do Friday prayers, obviously. We also have social events as a group -- we’ll do lunch after jamaat prayer, we see each other around campus daily. I have a friend who lives down the hall from me, and a couple live in buildings near mine. So it’s nice to hang out together, watch movies, do lunch and stuff.

I applied into the only building that’s all girls, which I love. Interacting with guys in class or in a club is not a big deal at all, but I don’t necessarily want to think, “Hmm, do I have to put on my scarf to go down the hall to wash my hands?” So it’s nice having a little safe space.

My RAs asked me about [boys being on the floor] at the beginning of the semester. I didn’t want it to be awkward -- to be like, “Well, you have to let us know before you bring a man home.” I’ll poke my head out the door to make sure there’s no one in the hallways, or if there is, I’ll just put my scarf on. And then there’s that occasional awkward moment when you get out of the shower and you’re trapped in the bathroom because there’s a man in the hallway. 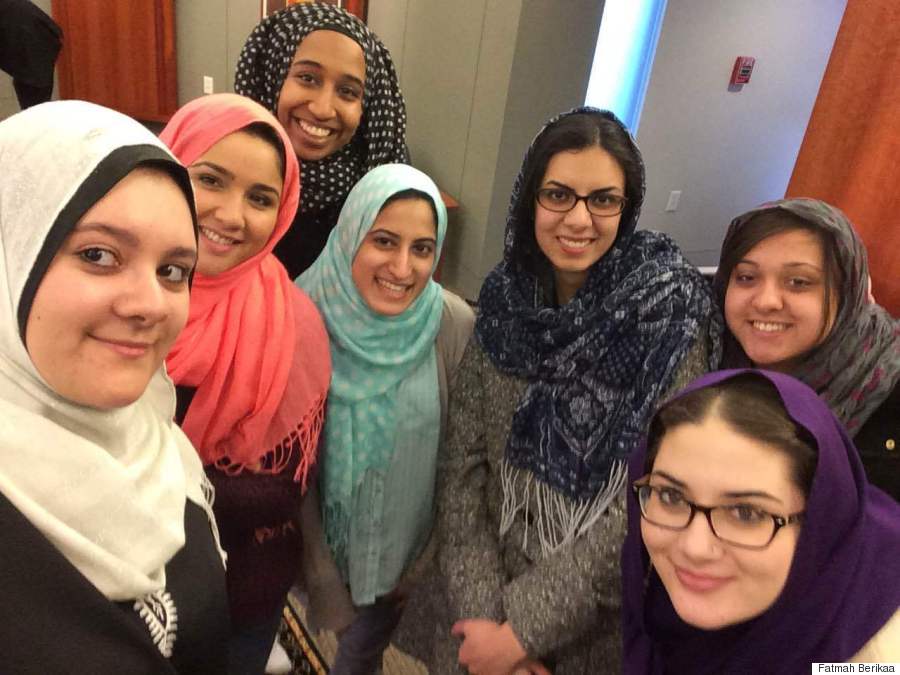 Fatmah and friends in the MSA.

My religion absolutely affects my student life. Islam puts a big emphasis on how important knowledge is; knowledge is super important in our religion. That’s obviously a motivator when the latest episode of "Downton Abbey" is more appealing than my philosophy essay.

Praying five times a day is great for me because it gives me time to talk to God, and it helps me relax so I can refocus myself. I plan my schedule around prayer times, in terms of classes and work -- it’s not as hard as it sounds. It’s not even about changing a class time, it’s just knowing I need 10 or 15 minutes between each class to get my prayer in.

It’s not a super lengthy process, and all I need is a prayer rug and a clean space. Depending on where I am on campus, I usually pray in my dorm, my friend’s dorm or an empty classroom or lecture hall. I keep a small little prayer rug with me, and it’s not really that big of a deal.

On Jumu’ah -- which is Fridays, the holy day -- we gather in this building that the school provides for us. We call it the hut, though I think it’s technically called the Multifaith Center. But it looks like a hut. It’s really cute. Every week the guides take turns giving a sermon and leading a prayer. The space feels really, really safe and cozy, and it’s always pretty clean. We all look forward to Friday prayer.

You know, there’s not as much bias as I would have thought. Sometimes people will say ignorant things. But it’s never confrontational. Other than that, everyone on campus is really accepting. That’s not always the case in the real world. I’ve had a lot of instances outside of BC where things have happened, or people have been really, really offensive. But that’s not happened at BC, which I was surprised at, but I’m really thankful for.

A lot of people look at Muslims like we’re aliens, like our lives aren’t parallel to theirs. That’s just not true. I giggle out loud when my friend sends me a text. I procrastinate. I stress over finals. I love Nutella milkshakes. We’re just like everybody else.

If people don’t have personal interactions with Muslims, they have no way of knowing that. We’re just “the other.” I want to tell people to go out and meet a Muslim. Just go meet one on the train or at work or whatever. Just make small talk.

If I were to say something to the Muslims reading: It’s our job to represent. We can’t leave people in the dark. They want to understand us, and they need to understand us. It’s important for our religious image that they know who we are and what we’re about.