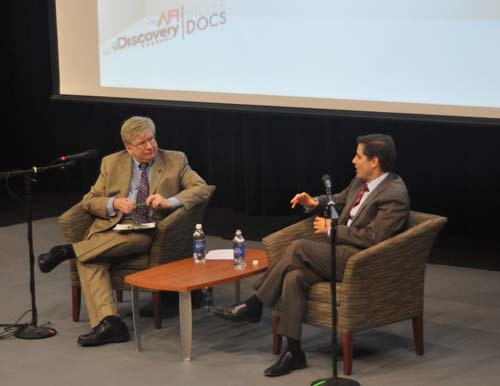 The standard set top box is an endangered species as entertainment and information converge and is increasingly delivered over the internet to your TV, laptop and handheld device. Not only will there be entertainment, sports and information sources available anywhere, anytime and on any device, the Internet will be the engine of job creation, at the center of health care reform and education. But to make this glimmering promise become a reality we have to move up the ladder from our position in 17th place for broadband Internet penetration among developed countries. We have to address our policy and technology shortcomings. This is one performance issue where size does matter.

"The number one biggest priority is our broadband future," said Federal Communications Commission (FCC) Chairman Julius Genachowski while extolling the benefits of an ever faster, more robust and open internet during a talk June 24, 2010 at the Silver Docs documentary festival and conference held in Silver Spring, Maryland.

What worries some is that the United States slipped from fourth place in broadband penetration at the turn of this century to 17th and is still sliding as other countries invest in connectivity and infrastructure, according to a study done by the Berkman Institute at Harvard University. 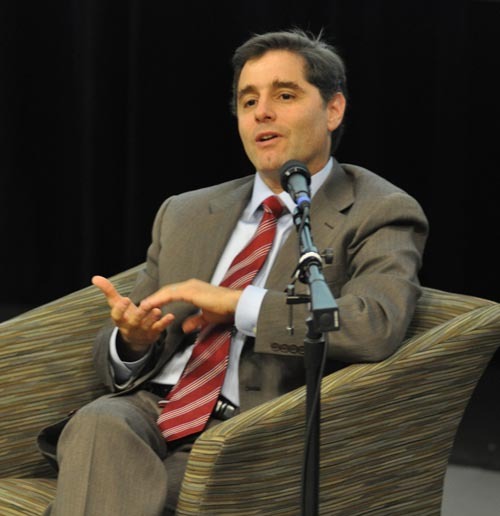 "We are moving too slowly," Genachowski said. "We're not talking about pipes into the house we need to get the house built." And it's not just about entertainment. "We need to do this for health care, education, jobs and public safety," he said.

The ability to store and access your medical records online will help doctors and hospitals quickly track your treatments, make sure your medicines don't conflict and cut down on the cost of paperwork. This is one of the keys to bringing down the cost of health care in this country according to independent health care analyst Emily Friedman. This effort has begun with funding from the economic stimulus package, a.k.a. the American Recovery and Reinvestment Act, which underwrote $83.9-million in grants managed by the Department of Health and Human Services for "health information" technology. This is expected to double as health care reform rolls out over the next five years.

While the U.S. lags in some indices, we do have a lot of the basic infrastructure in place. "We have the benefit in this country because we have 92% cable penetration into the homes," said Genachowski. "There are opportunities for wireless but we don't have enough spectrum allocated now."

Last week the President announced a plan that incorporated the FCC's recommendations for "nearly doubling" the spectrum allocated to broadband. "We will need more and ever more," said Genachowski.

He believes the economic and social costs of exclusion in our country are too high not to create a robust broadband future. But access and affordability are a major concern. There will be costs involved to bridge the digital divide and make sure there aren't two classes of citizens, the plugged in and the unplugged.

"Ten year ago if you were looking for a job you could use a newspaper or a fax machine," said Genachowski. "Now companies are going online for job applications. Today if you don't have access to the internet, you're out of luck."

Which is also true in education. "If you grow up today and don't have the skills you need to participate in the digital environment, do research, homework and communicate," you won't be prepared for the future, he said. 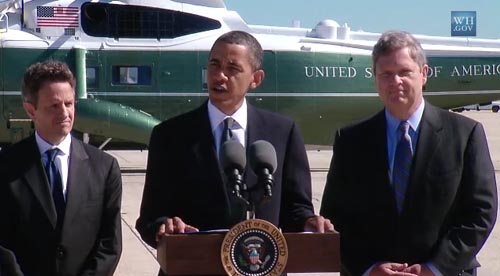 Recognizing the need to start closing the digital divide, President Obama announced a $795-million package of broadband development grants on Friday (July 2nd) that will "invest in 66 new projects across America to finally bring reliable broadband service to communities that currently have little or no access," he said in remarks at Andrews Air Force Base. The grants will go to schools, libraries, health care facilities and businesses in financially strapped areas of all fifty states. These grants will be funneled through the Departments of Commerce and Agriculture and will be augmented with $200-million of outside investment.

Increasing broadband access worries some who fear it will lead to more piracy. While online piracy of music and movies is a problem some in the Silver Docs audience were more concerned about "corporate pirates" who've tried to hijack control of the Internet for their own commercial benefit and are using an army of well-paid lobbyists to influence Congress, the courts and the public. 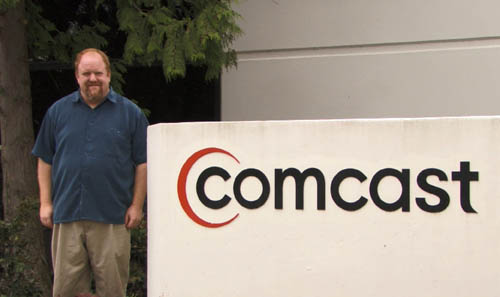 "This place is absolutely coin operated," said Robb Topolski, who's featured in a film about net neutrality that premiered at Silver Docs. "I don't know how to take people who can take that in stride."

Topolski, a former cop and software engineer became an accidental champion for "net neutrality" after he stumbled on the fact that Comcast, his internet service provider (ISP) was consciously blocking attempts to email his collection of classic barbershop quartet music to his friends. This discovery set off a firestorm and made him the star of Barbershop Punk that traces the struggle to make Comcast play fair.

"The Internet Standards Committee has rules for dealing with congestion. But Comcast crossed the line by using a proprietary system and keeping it secret," explained Robb who is Chief Technologist for the Open Technology Initiative of the New America Foundation and currently consults with media policy organizations Public Knowledge and Free Press

"What we found out is Comcast lied about the whole thing," said Art Brodsky, spokesperson for Public Knowledge, the organization that filed the complaint. "They were throttling one technology with another."

Robb's case helped convince the FCC, under a previous chairman, to order Comcast to treat all traffic coming over their network as equal. The argument was that "common carrier" rules have been applied to roads, electrical transmission lines and the telephone systems. The Internet should be seen in the same light as something that benefits the public and the providers shouldn't be able to play favorites. One company shouldn't be allowed to have its films, music or other content download faster than its rivals. That's the concept of net neutrality.

This ruling paved the way for current Chairman, Genachowski, to issue an ambitious 376 page National Broadband Plan in March, 2010 that promoted net neutrality. To develop the "Plan" they held "37 public workshops, that drew over 10,000 participants. The follow up Public Notices generated over 23,000 comments that took up 74,000 pages and prompted 1,100 ex parte filings that added another 13,000 pages to the record. The FCC conducted nine public hearings across the country and had "conversations" with numerous government agencies. Of course, they used the Internet to spread the word and the FCC Twitter feed attracted more than 330,000 followers.

This was rolled out as "America's plan, written by and for Americans." The report's preface proclaimed it was time to "act and invest in our future by bringing the power and promise of broadband to us all."

Unfortunately, the U. S. Court of Appeals for the District of Columbia didn't agree. It delivered a debilitating blow to "America's plan" one month after its unveiling when issuing its unanimous ruling saying the FCC lacks the authority to impose net neutrality under the current guidelines. These guidelines view the Internet as an information service and not a telecommunications service which would be regulated like the traditional phone companies. Comcast, Verizon and AT&T like this because it doesn't make them open up their broadband networks to competition versus the phone systems which must make the lines available to all comers.

Where does this leave Genachowski? What are the FCC's options? Can he change the guidelines?

"They have the authority to correct the Bush era mistake of taking broadband access services out of the telecommunications services and basically deregulating it. They can put broadband access back under regulation," said Brodsky. "They can do it, they just need to exercise it."

The question becomes will Genachowski's FCC choose this path and rule that the Internet should be seen like any other public utility, basically, a dumb pipe? Or will he appeal to the Supreme Court to overturn the Comcast decision, or wait for Congress to act? And can he afford to stir the pot with a controversial rule change during an election year as his party struggles to maintain control of Congress? If he does, he can expect a lobbying and public relations onslaught that will attempt to hammer him into submission.

Comcast, AT&T, Verizon and the other internet, cable and phone companies that combined control the bulk of access to the Internet now employ 276 former government officials who's mission is to lobby Congress and the executive branch. They value the status quo and are willing to pay whatever it takes to maintain their slices of the telecommunications pie.

This lobbyist army is formidable. According to the Sunlight Foundation, which has looked at lobbyist disclosure forms and the Center for Responsive Politics, 72% of the lobbyists hired by AT&T, Comcast, Time Warner Cable, Verizon, the National Cable & Telecommunications Association and the US Telecom Association have been in government. Some, like former senators John Breaux and Trent Lott, have held leadership positions in Congress. Several of the lobbyists are former lawmakers who were members of the House Committee on Energy & Commerce, the committee with telecommunications oversight. Breaux & Lott's operation spent $150,000 lobbying on behalf of AT&T in the first quarter of 2010. Combined, these groups have spent $20.6 million lobbying the federal government in the first quarter of 2010 alone.

It's a certainty that the campaign contributions will be flowing and the bulk of the money won't be coming from consumers struggling to get online to make a donation.

"We'll get there, it's too important," said Genachowski. While we know where "there," our digital destination should be - an open and robust Internet that promotes economic growth, improves health care and education - it isn't clear yet where "there" will be. Welcome aboard, it's going to be a bumpy flight.