Whoooo, it's 2008! HAPPY NEW YEAR! The biggest party night of the social calendar — so how better to spend it than alternating between CNN and Fox News? Before you go judging me and my lonely, lonely New Year's Eve, please know that I am on the West Coast on vacation with my family, so being in the room at 9 pm does not a lame New Year's make (being asleep at midnight might qualify, though — which I was. Party!). In truth, it was some good times — having the TV on to Times Square is a New Year's Eve tradition, whether you're at a house party (smart!) or in some packed club bitterly regretting the $150 bucks you paid for admission and a plastic flute of cheap champagne at midnight. So it was smart of the cablers to get on in there and try to make themselves the channel of choice for being left on in the background and possibly fallen asleep to — what the hell, Nielson can't tell the difference!

So who brought the party to the party? CNN had the much-ballyhooed Anderson Cooper (when is he ever not ballyhooed?) paired with Kathy Griffin, which was a surprisingly good match (Anderson played straight man, but could at least keep up, unlike, say, Larry King). Fox had a little less star power in Bill Hemmer and Megyn Kelly, but they certainly looked pretty. Both networks featured their respective "U" or "I" reports wherein viewers sent in greetings and/or photos for replay onscreen — interactive! — and both had reporters roving through the scene to ask people in funny hats where they were from and if they were having a good time. 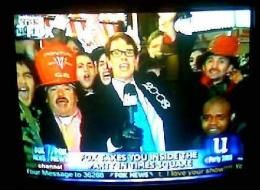 Secret sauce for both: The Griffs! On Fox, by far the most energetic and fun-to-watch participant was Griff Jenkins, who charged through the crowd like a dorky Van Wilder, pumping up the random revelers with his giant 2008 glasses and relentless party spirit. No matter what it is he's doing, Jenkins always seems pumped to be doing it, and he was. Why isn't he hosting this show? Bill Hemmer is smooth, but not fun. Griff Jenkins, on the other hand, always seems seconds away from a lampshade on the head. I mean that in the best possible way.

On CNN, there's no question that Kathy was the Griff made the diff (sorry, couldn't help it). Anderson isn't one for the breezy ad-libbed chitchat, but with Griffin there his game was raised and he actually looked relaxed (and think about it, AndyCoop does not often appear relaxed). Griffin is a hilarious ad-libber — that's what she does, that's how she powers a reality show to an Emmy and makes Larry King riveting for an hour — and she spits out the laugh-lines with shocking frequency, like making fun of i-Reports, asking "In the current administration, who would you rather waterboard?" and calling Anderson on gratuitously dropping his high-profile assignments into conversation ("Anderson wants us to know that he missed the VMAs because he was in Iraq!"). Because, you know, that clip of Britney wobbling through that performance wasn't really shown that much. Especially not on CNN. Oh Anderson, you are so busted. 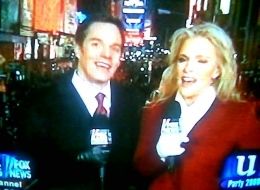 So, which show was better? Obviously CNN — having a star headliner makes all the difference. I'm actually talking about Griffin here — she's an entertainer, so it stands to reason that she'd make the broadcast actually entertaining. But beyond that, here's where CNN's strategy of making AndyCoop a star in his own right has residual payoff, because his name makes him a draw in his own right, whether or not this is actually even up his alley. That's just not the same with Hemmer or Kelly — telegenic though they are (or, for that matter, Kiran Chetry, who I just thought of now, probably for the same reason).*

Here's some anecdotal evidence to back this up: My parents, who default to Fox, were both piqued by CNN's rockin' eve. Circled in the newspaper by my mom, who does that sort of thing: "New Year's Eve Live With Anderson Cooper!" (other options, including Fox, were listed). As for my dad, he had walked into another room and turned on Fox, but later when he heard that Kathy Griffin had been on CNN he was bummed to have missed her. Would he have switched had he known? "Definitely," he said. "I find her very funny." (Original reporting, whoo!). Upshot: Who knows what the ratings will be — never underestimate that loyal Fox audience — but to my eyes, AndyCoop and Griffin won the night for CNN because they represent that holy grail of cable-warring: A Channel Switcher. People who might not otherwise switch to CNN for their news undoubtedly did so last night for their New Year's Eve entertainment, and that makes all the difference. Who knows whether Anderson meant it last night when he said, "Man, this is the last time I'm agreeing to do this," but methinks CNN will have something to say about that particular New Year's Resolution.

Update: Orlando Sentinel TV Guy Hal Boedecker has his own thoughts on New Year's Eve, and clicked around the dial, including watching Dick Clark and Ryan Seacrest.. Here's what he had to say about Clark: "New Year's Eve also has become, in a strange way, a chance to check Clark's progress in coming back from a stroke. He seemed a bit feeble this year, but he was also valiant....We're witnessing a TV icon setting a good example, growing old gracefully and not hiding." Amen to that.

*MSNBC opted to stay out of the fray entirely, instead running some of their most celebratory eps of "Lock-Up" (along with the typically-festive promo: "This New Year's Eve, have a ball...and chain!"). Party!