Staffers at the New York Times briefly walked out Monday afternoon in protest of the management's position on contract negotiations.

It is the latest development in the escalating war over contract talks. Union members have been working without a contract for the last eighteen months. Now, it appears they are mobilizing in response to the latest stalemate in negotiations.

At 3:35 Monday, employees met at 3:35 p.m. and left the office. Times reporters Donald G. McNeil Jr. and Richard Pérez-Peña counted between 375 and 400 participants, McNeil told The Huffington Post. Now This News, which was on the scene, reported that the protest lasted about ten minutes. It tweeted this picture of employees filling up the sidewalk on 41st St.: 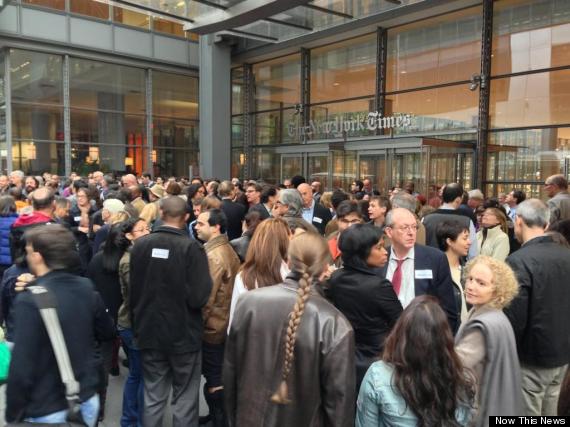 Twenty-three staffers also walked out of the newspaper's D.C. bureau: 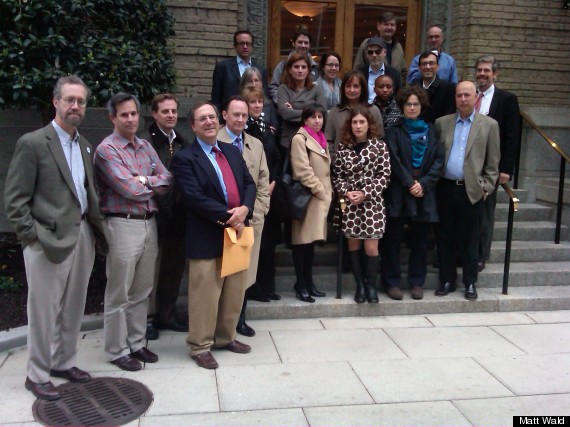 Employees have become increasingly agitated over the Times' continued call to freeze pension plans and recent demand for separate contracts for print and digital employees. The walkout comes after a recent meeting of 200 staffers, who discussed taking collective action to send a message to management. Grant Glickson, the unit chair for the Newspaper Guild of New York at the Times, emailed employees with further instructions on Monday morning.

"Today we begin a series of actions to make sure that the company hears and understands our position," Glickson wrote. "We have more than earned fair wages and benefits. We will accept nothing less... It is time to raise our voices."

Those actions also include signing a letter to publisher Arthur Sulzberger Jr., executive editor Jill Abramson and incoming CEO Mark Thompson. "We implore you: do not permit The New York Times to be steered any closer to this abyss," the letter reads.

The walkout won't be the first protest that Times' staffers have staged over proposed contract terms. Earlier this year, employees held a silent protest outside a meeting of top editors, and demonstrated outside the company's annual shareholders meeting. Angry staffers also made their demands heard in a series of videos.

Contract talks started up again in September after a hiatus, but are now stalled despite some movement from both sides. Below, read the full text of the Guild's memo to employees.

There is no longer any time to waste.

At every bargaining session for the last year and a half, negotiators for The Times have offered us the same poisoned chalice: perpetually shrinking compensation.

Today we begin a series of actions to make sure that the company hears and understands our position. We have more than earned fair wages and benefits. We will accept nothing less.

That message has not yet gotten through, despite huge concessions by our representatives. It is time to raise our voices.

Having been told that The Times urgently needed to freeze pension obligations, the Guild brought to the table an alternative plan that absolves the company of all volatility, and shifts the risks entirely to us.

How did the company respond to this historic change? Its negotiators returned with radical demands to slash our wages and benefits. Their early proposals called for an overall $12,000 annual cut, in real dollars, to our compensation package.

Then it got worse.

In their latest proposal, The Times proposed to extend the term of the contract, piling onadditional years of reduced wages and benefits. That would make the new real cost to each one of us at least $15,000 annually. Other responsible estimates reckon that the losses to us are even higher. No matter how hard you squint at the numbers, they never get better.

As far as the eye can see, your wages and benefits would decline.

By itself, that is a formula for disaster, for us as individuals, and for the ability of The New York Times to attract and keep talented people. But there’s even more. Now they want – or so they say – separate contracts for digital and print journalists, even though there are no longer meaningful distinctions in the work we do. Our journalism is distributed across multiple platforms, print, digital, audio and video. That was and (we think) still is the vision of Arthur O. Sulzberger, Jr. for The New York Times of the 21st Century. It was a vision embraced without reservation throughout the newsroom. That took plenty of work. But we all saw it as necessity and opportunity.

Any proposal to dismantle the decade of work that has been done to unify the newsroom, securing its place as the world’s premier news organization, could be laughed off as far-fetched legal gimmickry. After all, that would be an act of self-immolation. But even if it’s not worth serious consideration, it has landed just we are heading at full speed toward a crisis over genuine issues like our pay and benefits.

They threaten to declare impasse; they burn up hours on low-farce; then they slap down another version of their repugnant demands to cut our compensation.

It is long past time for the company and its negotiators to pay attention to what matters most of all to us. Together, we can make sure that happens. Join in, as beginning today, we will repeat our message until they hear it:

Nothing less than fair wages and benefits.

Here is the schedule of events for the next two days.

Monday Noon: Deadline to sign the letter to Arthur, Jill and Mark. It’s atsaveourtimes.com. More than 600 people have already signed on. Make sure that people who may have not been paying attention take a look at it.

Monday, 3:35 PM: A group will be leaving the building en masse for a few minutes. Here are the instructions.

* By 3:35 PM, be at the Pulitzer staircase in the center of the newsroom on your floor. NB: This does not mean leave your desk at 3:35. It means be there by 3:35.
* If you work above the fourth floor, come to the fourth floor by 3:35 pm.
* As the people on the fourth floor come down, those on the third floor will join them and walk to the second floor.
* At the second floor, the remaining people will join the crowd from the upper floor, and we will all be guided to the building exits by floor marshals.
* At street level, other colleagues will have a (very short) statement on stickers for us to wear back to our desks.
* We will exit onto 40th Street and walk up Eighth Avenue to the 41st Street lobby entrance, and then return back to our desks.

If you grab a cup of coffee from the third floor wagon, be sure your sticker is in plain sight.

Please note: This is not a job action. We want you to participate if you have flexibility in your work schedule that permits a 10 or 15 minute break at 3:35. Please plan your day accordingly. If you are unable to join the group, colleagues will bring back stickers.

Tuesday morning, 10 AM: Negotiations resume at Proskauer Rose, the company’s law firm. Our negotiating team has kept up a back-breaking schedule, and they deserve our support. Please sign up as an observer.

Don’t sit it out!

And don’t stop until they get the message.