Since Obama signed his health care plan into law in 2010, 21 states have enacted laws restricting private insurance companies from covering abortion, and more may follow. The result is that women in 23 states won't be able to go to an Obamacare insurance exchange and buy a health plan that includes coverage of abortion, except under extreme circumstances.

State legislatures from Alabama to Pennsylvania to Wisconsin dusted off the anti-abortion playbook of the 1980s to pass laws that prohibit health insurance companies from including abortion as a covered service, beyond exceptions such as protecting a pregnant woman's life. In some states, women theoretically are permitted to buy separate coverage for abortion, but abortion rights activists say such plans are impossible to find.

The trend that swept state capitals over the past three years has been fanned by an anti-abortion movement reinvigorated by the tea party wave during 2010 elections, when Republicans made huge gains in state legislatures, governors' offices and Congress. These insurance regulations take effect after many states have imposed unprecedented restrictions on access to abortion itself that have closed clinics across America.

"What they're trying to do make abortion more difficult to access and unaffordable for women, and this is one of the ways they can do that," said Gretchen Borchelt, director of state reproductive health policy at the National Women's Law Center in Washington. "It's part and parcel of the larger effort to make abortion harder for women to get."

But the new laws on health insurance wouldn't have happened without the passage of the Affordable Care Act, or ACA, and the intense Republican opposition to the law, advocates on both sides of the abortion issue say. 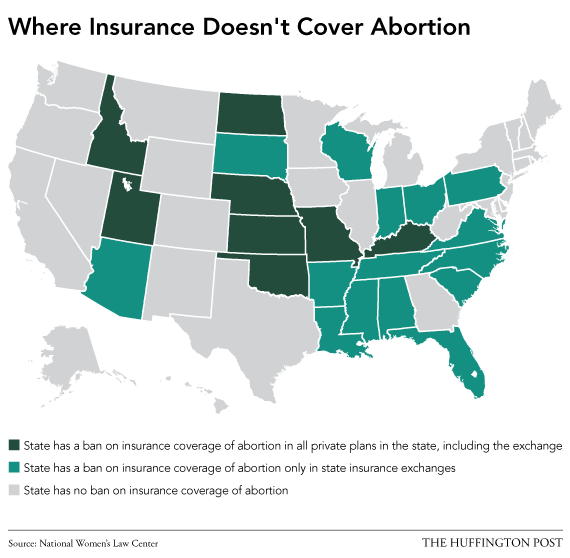 "As soon as the ink was dry on the ACA, states started passing laws limiting abortion coverage on the exchanges," said Elizabeth Nash, state issues manager at the Guttmacher Institute, a New York-based research and advocacy organization focused on sexual and reproductive health and rights. "You don't have over 20 states passing laws on an issue and not have it be considered a major trend," she said.

"Many of these states were hostile to the Affordable Care Act in general. They are unsupportive of abortion rights. And put those two issues together and it's easy to pass an abortion coverage restriction for the health exchanges," Nash said. "In the language of the ACA, it encouraged states to adopt abortion coverage restrictions in the exchanges, so with that, it made it easier for states to do so."

"The 2009-2010 health care reform debate raised awareness among Americans that a large number of private insurance plans -– maybe even their own -– cover abortions," Harned wrote in an email. "Many pro-life Americans, along with state legislators, are now seeking a way to prohibit insurance coverage of most abortions in their states."

The abortion coverage laws fit another pattern: Republican-led states have sought to stymie the implementation of Obamacare in myriad ways, from refusing to expand Medicaid to more poor people to declining to establish health insurance exchanges, to advancing laws seeking to undercut its consumer protections and suppress enrollment.

Abortion-rights advocates were furious when Obama and congressional Democratic leaders made concessions to anti-abortion Democratics, led by then-Rep. Bart Stupak (Mich.) and then-Sen. Ben Nelson (Neb.), to secure their crucial votes for the health care reform bill in 2010. The Affordable Care Act extends previous laws prohibiting federal tax dollars from paying for abortions and spells out that states are permitted to ban private health insurance from covering abortion, either on the law's health insurance exchanges or anywhere else.

States already had that authority. But before the enactment of Obamacare, only five states had laws restricting insurance coverage of abortion: Idaho, Kentucky, Missouri, North Dakota and Oklahoma, according to the National Conference of State Legislatures. "This issue had been dead since the '80s at the state level," Nash said.

Since 2010, Idaho, Missouri and Oklahoma passed additional laws and 18 states enacted new ones. Some states forbid all private health insurance companies from covering abortion, while others limit the rule to health plans sold on insurance exchanges. The exchanges, which begin accepting enrollment Oct. 1, are where people who don't get job-based health benefits and small firms will comparison-shop for coverage and learn whether they qualify for financial assistance.

In the remaining states, health insurance plans that cover abortion are likely to be available. Abortion-rights advocates say most health insurance today already covers elective abortion, and a Huffington Post review of the health insurance exchanges suggests that won't change under Obamacare.

Thirty-three percent of women who had abortions in 2008 were uninsured, 30 percent had private health insurance and 31 percent were enrolled in Medicaid, according to a 2010 Guttmacher Institute report. Nevertheless, 57 percent of these women paid for their abortions out of pocket, including 63 percent of those with private insurance. Women with insurance coverage pay for abortions for several reasons, including having plans that won't cover it, not knowing what their insurance benefits are, or wanting to keep an abortion secret from family members, Nash said.

The U.S. Department of Health and Human Services is running at least parts of the exchanges in 34 states, including some where abortion coverage is lawful. HHS hasn't yet announced what insurance products will be available on those marketplaces and couldn't say whether abortion will be covered. Likewise, officials in Colorado, and Minnesota couldn't provide the information. A spokesman for the New Mexico Health Insurance Exchange didn't respond to requests for comment.

The health care reform law extends 1977 Hyde Amendment prohibitions against federal dollars being spent on abortions except for limited cases like when a pregnancy is the result of rape or incest or when the woman's life is in jeopardy. These rules also apply to Medicaid, although 17 states have broader exceptions and fund all or most medically necessary abortions, according to the Guttmacher Institute.

Women may still purchase health plans that cover abortion, but there must be an additional charge of at least $1 a month, and a woman can't apply federal tax credits to the abortion benefit. Those credits are available for people earning between the federal poverty level, which is $11,490 for a single person this year, and four times that amount. Insurance companies have to keep the money "segregated" in separate accounts when they collect premiums.

The Affordable Care Act also bans states from designating elective abortion as a guaranteed benefit in insurance sold on the exchanges and requires that at least one insurance product in each state explicitly not cover abortion. The U.S. Office of Personnel Management, which oversees federal employee benefits, is responsible for designating multi-state plans that will be sold in numerous exchanges and must choose one that doesn't cover abortions. The Office of Personnel Management hasn't yet selected the insurance companies.

Anti-abortion advocates weren't satisfied with the law's safeguards against tax money financing abortions and contend that separating tax dollars and individual dollars isn't possible. Moreover, Harned wrote, anti-abortion activists don't want health insurance to cover abortion because they believe it encourages more women to undergo the procedure. "It is an accepted principle of economics and public policy that when you subsidize or pay for a service or product, you increase demand for that service or product," she wrote.

Women who want to make sure abortion is a covered service -- or want to be certain that it isn't -- will have to look at the fine print when choosing a health plan, but won't need to worry about the complex movement of money behind the scenes, Borchelt said.

"It's not wraparound coverage. It's not supplemental coverage. It is just part of the regular, comprehensive plan that's being offered, so it's just the way insurance works now," Borchelt said. "We used to talk about it as being two checks that the consumer would have to write because of the segregation requirements, but that's not the way it's being implemented."

In states like Pennsylvania and Missouri, however, the situation is more complicated. These and other states allow women to buy a "rider," or supplemental insurance plan, solely to cover abortion. The trouble is, abortion-rights advocates say, these insurance products don't seem to exist.

"We haven't been able to ascertain if health plans are actually offering these riders," Borchelt said. "My sense has also been that health plans also don't know that riders are supposed to be offered or available." And women aren't likely to know they should ask, and generally don't consider abortion coverage to be a main determinant of what health insurance they choose.

"Abortion should just be part of the comprehensive plan that women get because they don't necessarily look for that or think, 'Oh, I might need an abortion,'" Borchelt said. "They're not going to ever predict a situation in which they're going to have an unplanned pregnancy or a problem pregnancy or a sexual assault leading to pregnancy. It's not something that you plan for."