Nearly a year after she quit her governorship of Alaska, Sarah Palin was found guilty today of another breach of the Alaska Executive Branch Ethics Act involving her so-called Alaska Fund Trust (AFT), which she established as a private "legal defense fund" while governor.

Timothy Petumenos, independent counsel for the Alaska Personnel Board (and ironically, the same independent counsel who issued the Troopergate findings nearly two years ago while Palin was the GOP vice-presidential nominee), presented the state's Findings, Consent Decree and Settlement Agreement this afternoon from the perfectly named Adventure Room of the Captain Cook Hotel in downtown Anchorage.

In what is an extremely detailed finding, Petumenos ruled that even though Palin assigned the research of forming the fund to her former spokesperson Meghan Stapleton and even though Palin relied on extensive outside legal counsel, that "the Trust itself, as ultimately conceived, violates the Ethics Act." 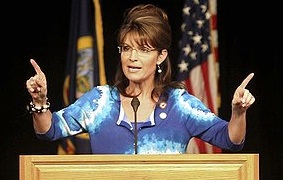 The finding is a stinging rebuke to Palin, who must now return more than $386,000 in contributions to the AFT.

It also forces her longtime political crony Kirstan Cole to be removed from serving as Trustee of the fund.

Perhaps most significantly, Petumenos demanded that "all donors to the Trust, whether they donated before or after the resignation, as promised in the supporting website information, must be publicly disclosed." Costs of more than $80,000 incurred during Palin's governorship can be defrayed only by contributions made after her resignation. Only $33,546 was contributed to the fund following her resignation.

In April of 2009, while still governor, Palin established the AFT as a means of paying what she alleged were more than $500,000 in legal bills owed to her Anchorage-based attorney Thomas Van Flein. According to its official website:

The Alaska Fund Trust is the official legal fund created to defend Sarah Palin from an onslaught of political attacks launched against her, her Family, and colleagues (sic).

The fund had the appearance of Palin's formal political action committee, SarahPAC, which was raising funds to fuel Palin's national political ambitions. SarahPAC operates under strict federal guidelines for income and expenditure disclosures. The Alaska Trust Fund, however, is actually a private trust, with no state or federal government oversight.

According to of the Alaska Department of Law's Marjorie Vandor, "There is no executive branch state agency with jurisdiction over private trusts nor does our office handle the administration of private trusts." As such, Palin's AFT is little more than a slush fund with zero public transparency or accountability.

Last July, independent counsel for the Alaska Personnel Board Tom Daniel issued a preliminary "probable cause" finding that:

In light of the evidence that the governor expressly authorized the creation of the trust and the fact the trust website quite openly uses the governor's position to solicit donations, there is probable cause to believe that Governor Palin used, or attempted to use, her official position for personal gain in violation of Alaska statute.

Daniel also found "payment of the governor's legal fees by the Alaska Fund Trust will violate the Ethics Act prohibition against a public officer accepting gifts intended to influence performance of official duties."

He particularly cited the troubling political relationship between Palin and Cole, whom Palin had appointed to several state boards in Alaska, including the Agriculture and Conservation Board and the Royalty Oil and Gas Advisory Board. Cole also serves She's also on the board of the controversial state-owned Creamery Corporation (Matanuska Maid). Cole's previous claims that "the governor is not, was not and has not been involved in this trust" simply did not pass the straight-face test.

Daniel recused himself from continuing with the case because his firm has done work for Democrats; he did not want the findings shrouded in controversy. Apparently Petumenos took over the case sometime in January of this year.

Andree Mcleod, the Anchorage-based government watchdog who has filed five Ethics Act complaints against Palin and who was recently transferred "power of attorney" on the AFT complaint, issued a statement today:

"Sarah Palin continues to disappoint. Today's finding makes it obvious that she's out for herself. I've spent more than two years trying to shed light on many of Palin's wrongdoings while governor. Her typical response: to vilify and deride Alaskans who only wanted to hold her accountable for her misconduct; this should give people pause."

Immediately following the ruling, Palin posted a new website sticking out a hand for the Sarah Palin Legal Defense Fund.

Palin's attorney Van Flein of Anchorage, who was to have been the recipient of the ATF's bounty, had foreshadowed today's ruling with an odd posting last night on Palin's Facebook page. "There will be times when Sarah Palin will have to take one for the team," Van Flein wrote, "in order to continue on with her message to the country and simply resolve matters without having to incur crushing personal debt."

McLeod was not buying into any of Van Flein's excuses:

"Never has a governor lowered the bar as low as Palin has when she breached the public's trust over and over again. Her arrogance, sense of entitlement and recklessness while doing the people's business sets a very bad precedent.

"For her to be portrayed as a role model by the media is an absolute travesty. The more people find out about Palin...the more they learn that a 'servant's heart' does not beat within her."