Pope Francis urged young people on Thursday to welcome migrants and refugees, putting himself in direct contrast with the government of Poland on the second day of his visit there.

Francis addressed more than 600,000 young people gathered in the city of Krakow for World Youth Day, a jamboree that actually lasts six days and has been dubbed the “Catholic Woodstock”.

After watching performances from around the world, he urged them in an address to leave their comfort zones and be ready to embrace those in need.

“A merciful heart opens up to welcome refugees and migrants,” he told the youths gathered in a large field near the city center.

Some of the country’s conservative Church leaders have also been hesitant over migrants, particularly those from Islamic countries, fearing that they will dilute Poland’s Christian identity.

On Thursday morning at the shrine city of Czestochowa, Francis prayed before Poland’s holiest icon - the Black Madonna of Jasna Gora - and said outdoor Mass for a congregation of tens of thousands, thanking Poles for holding on to their faith in difficult times.

Francis praised what he called “the contagious power of a genuine faith, passed down from family to family” in Poland, which is about 98 percent Catholic.

He said their faith had stayed strong in many situations throughout history. Poland is renowned for keep its Catholic flame burning during decades of Communist rule.

As the 79-year-old pope was blessing the altar at the start of the Mass, he tripped on a step but was helped up by aides and did not appear to be hurt. He continued the Mass and read his homily normally.

Francis suffers from sciatica, a medical condition in which pain sometimes shoots down the leg from the lower back.

The shrine is home to the Black Madonna, a Byzantine icon from sometime between the sixth and ninth centuries and brought to Poland some 600 years ago. The icon is painted on wood and covered with silver and jewels.

The shrine has been a focal point in difficult periods of Polish history. Poles flocked there to pray when martial law was declared by the communist government in the early 1980s.

The late Pope John Paul II, who reigned for nearly three decades until his death in 2005, visited the shrine often during his trips to his homeland and donated the blood-stained white sash he was wearing on May 13, 1981, when he was shot in St. Peter’s Square at the Vatican by Turkish gunman Mehmet Ali Agca. 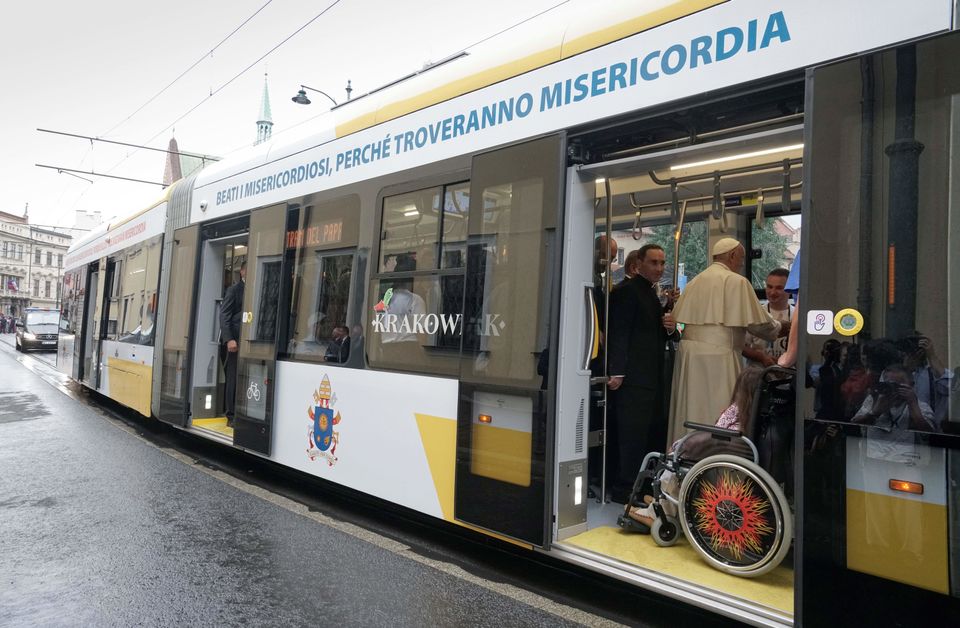 1 / 7
Pope Francis greets a group&nbsp;Catholics&nbsp;with developmental disabilities as he rides with them aboard a city tram to Blonia Park on July 28, 2016 in Krakow.
JOE KLAMAR via Getty Images