Have you ever heard someone joke that if they knew they'd have lived so long, they would have taken better care of themselves? As it turns out, this is no joke. Today's retirees tell us in no uncertain terms that the number-one ingredient for a happy retirement is, by no small margin, having your health. Sure, other things are important, like being financially secure and having a loving family and friends, but a new study reveals that health trumps all as the key factor to having a happy and satisfying retirement.

Figure 1: The most important ingredient for a happy retirement is... 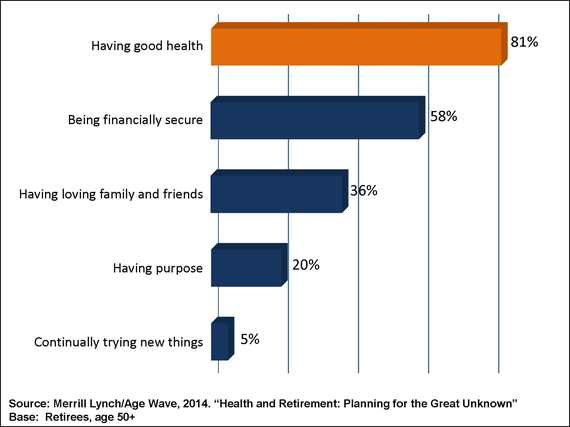 My firm, Age Wave, in partnership with Merrill Lynch, just completed a comprehensive new study titled Health and Retirement: Planning for the Great Unknown. We surveyed 3,300 pre-retirees and retirees nationwide--from all walks of life and socioeconomic strata--to uncover their concerns and worries about health and health care expenses in retirement. The study also revealed which steps you can take right now to make your retirement healthier and happier, with more financial security and greater peace of mind.

This article is the first of a two-part series that will explore some key findings from the full study report.

This year, the youngest of the boomer generation are celebrating their 50th birthday, while the oldest, at age 68, are moving into what has traditionally been defined as the retirement years. When it comes to their health, the boomer generation, as a whole, has consistently been more proactive and demanding than their parents. Back in the 60s, boomers created the Boston Women's Health Collective and wrote Our Bodies, Ourselves, an ode to self-responsibility in health. And that was just the start.

During every stage of life, boomers have adopted a more holistic and empowered approach to health. For example, they catalyzed the fitness movement: in the 1960s, less than a quarter of adults exercised. By the 1980s, six in ten exercised regularly. By their early 30s, half of all boomers had used alternative/complementary medicine, such as acupuncture, chiropractic medicine, or herbal supplements. Fast forward to today and boomers are 30% more likely to use alternative/complementary medicine than the Silent Generation preceding them.

Boomers are also far more demanding in their relationship with health care professionals. For instance, they want their doctors to pay attention to their minds as well as their bodies. The overwhelming majority (95%) say it's reasonable to expect their doctors to ask them about their fears and concerns (only 10% of doctors agree). As one focus group participant told us, "My doctor needs to understand my health worries--what keeps me up at night--just as well as she understands the results of my blood tests. They are both important to me and both impact my overall well-being."

The way boomers relate to their doctors is worlds apart from that of their parents.
Another focus group participant explained it this way: "My parents believed that a doctor's word was gospel. You didn't question it. Today, you need to be your own health advocate." Indeed, 70% of boomers say they regularly question doctor's orders, but only 29% say that their parents did the same.

When further comparing their generation with their parents' (figure 2), boomers are:

Figure 2: Boomers' view of their own generation vs. their parents' generation 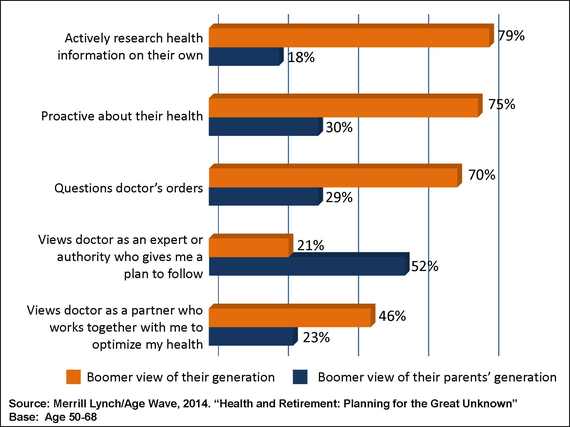 The Health/Wealth Convergence: The Missing Link in Retirement Planning

Of course, planning for health costs can be hard, since so much is unknown about your future health status. When we probed this issue in focus groups, people expressed sentiments such as, "It's the uncertainty," "How can you plan for health care when you don't know what will happen down the road?" and "There are so many unknowns." 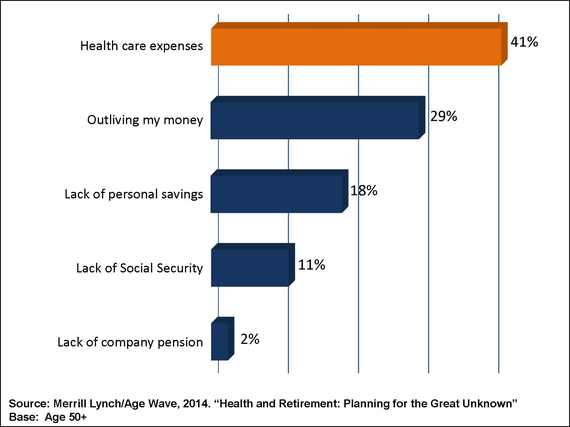 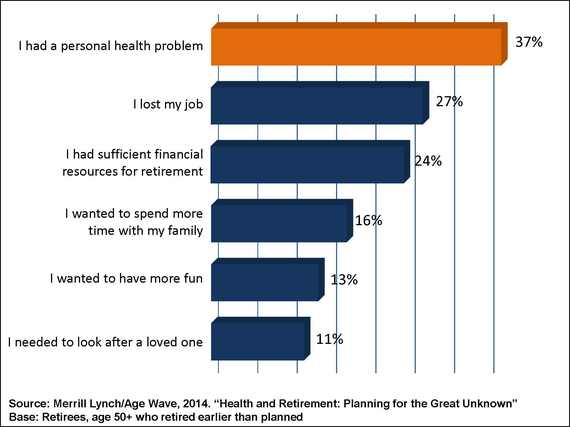 As Andy Sieg, Head of Global Wealth & Retirement Solutions for Bank of America Merrill Lynch observes, "This research provides an important wake-up call for everyone involved in helping people plan for this next stage in their lives. Respondents are telling us that this is not a do-it-yourself project. They are seeking clear information and trusted resources to help them figure out how to plan for health care costs in retirement."

Survey respondents told us that maintaining health and preparing for future health care expenses are most important for a happy, fulfilling, and financially secure retirement. Further, this study revealed important steps everyone can take, including:

Boomers have a take-charge attitude toward their health and health care, so this list can serve as a guide for that proactive management of lifelong health and the associated costs. These practical steps can help protect your health and wealth in retirement.

Stay tuned for part two of this series, posting tomorrow. I'll describe the four different HealthStyles of boomers and discuss what makes each one tick.