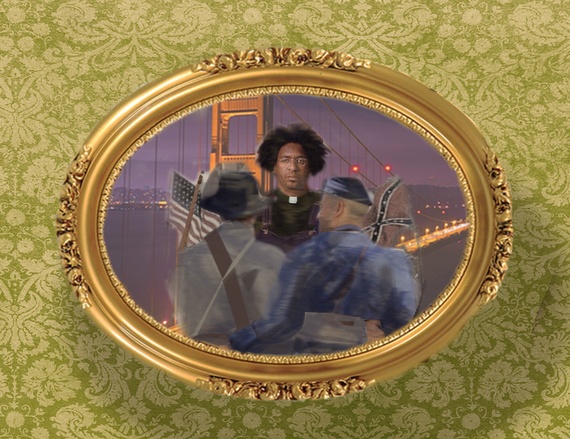 Now that we have done the Memorial Day Confederate flag burning and burial across the country two years in a row, one might think that perhaps it is time to consider a more peaceful moment of reconciliation, emotional transcendence, and patriotic unity. But with the looming possibility of a Trump presidency and the call to "Make America Great Again," I think now is the time for a more aggressive creative engagement--not a truce. The recent hate mail, terroristic trolling, and even death threats tell me that we are at a point of no return, that we are at point beyond conversation, at a point of critical collective psychosis. Maybe my work seems confrontational and polarizing. Bingo! It is supposed to be! This war, this illness, started long ago, and the resistance to empathetic discourse is molecularly deep and the road to American togetherness is under major construction. To understand my point and see where irony meets insanity, read what my favorite fellow Americans, the Mystic Knights of the Ku Klux Klan, had to say about my Gettysburg exhibition back in 2004: 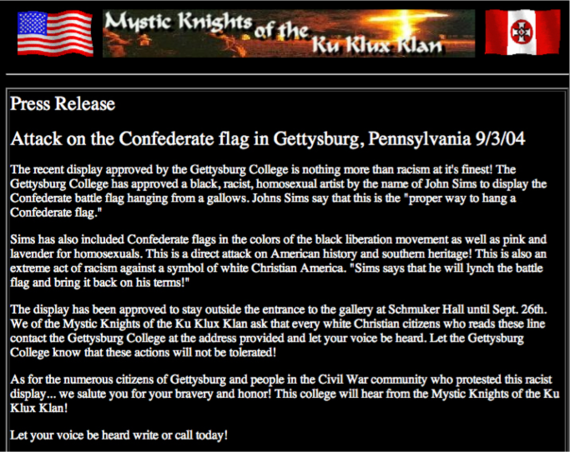 This love note is actually tamer than most and indicates that even the KKK can write a press release. However, what I am finding is that responses to the response--the meta-responses-- are sometimes so much more interesting, powerful, and instructive than the response itself. We see this played out in the recent demonstrations against police brutality or the current Confederate symbol debate. And on a personal note, shortly after the KKK press release came out, a family member contacted me and asked if I were gay. I told him that if I were gay, he would not hear about it from a KKK website! I guess this chapter of the KKK was (as were other folks) a bit upset about my Drag Flag installation, featuring a Confederate flag redone in hot pink and lavender glitter and fur. The fabric was made of very shiny satin--and came with the stilettos, too. 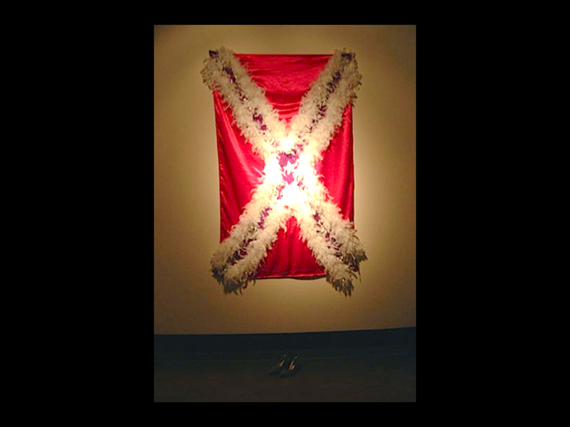 The Drag Flag, premiering in Gettysburg in 2004 at the Schmucker Gallery in the exhibition Recoloration Proclamation: The Gettysbury Redress curated by Molly Hutton, was inspired by watching hours and hours of Civil War reenactments. I was drawn to the reenactors' close attention to detail, especially with the uniforms, which got me thinking about approaching the Confederate flag in a different way. Before, I had engaged with the flag as a symbol to be remixed into my cultural terms or brought into relationships with other collaboratively evil symbols (i.e., the noose). But what emerged was a subversive inspiration to make the flag pretty, or even sexy, if such a thing is possible.

While there is sometimes an impulse to creatively resist pain or dress up trauma, I was ready to explore dramatic beautification as a way to counterbalance the negative association of the flag with white supremacy and the terror of violence. This was also a desire to break from the heaviness of the gallows piece and embrace the opportunity to play and experiment. This piece also led me to move from the seduction space to the scary space of forbidden intimacy: love. How could I intersect the complexity of the Confederate flag with the desire of human love, forgiveness, and re-union, especially when so much of the pro-Confederate flag defense seems to be selfish and sociopathic? And so I came up with the following piece: The Wedding. 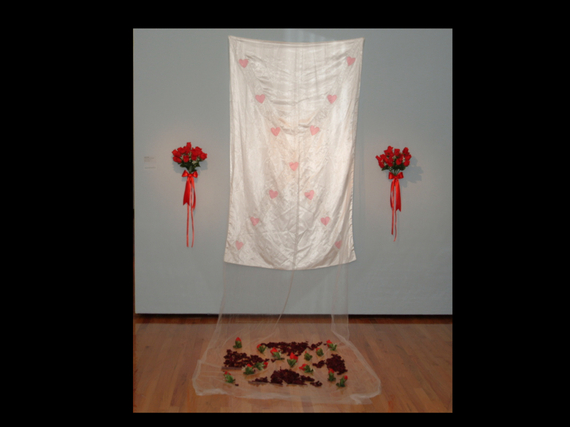 This installation was included in the group exhibition Afro-Provocation, curated by Cythnis Hollis at the Brogan Museum in 2007, and it explored the use of the marriage ceremony as a ritual device for the union of ideas: love and sovereignty (hence the hearts replacing the stars). This work was also shaped by the ubiquitous pro-Confederate phrase, "Heritage Not Hate," which seems problematic when you consider that heritage is based on white supremacy, with a few lynchings along the way. This installation became a call to embrace the idea of "Love Not Hate" as well as an invitation to the pro-Confederate movement to marry "Love" with "Heritage," going forward and looking backwards.

When the Vermont Marriage Equality Act of 2009 law was passed, I thought about how the Confederate states' rights argument ironically connected to a couple's right to marry and the complex relationship we have with governmental interference. Even so, we must be consistently critical of a government trespassing on the space and sovereignty of consenting adults, and equally critical of treasonous elements that hide behind the mask of "rights" as means of perpetuating human injustice. The Wedding installation, along with the public debate on same-sex marriage, inspired the creation of the performance piece, The Wedding: A Civil Re-Union. 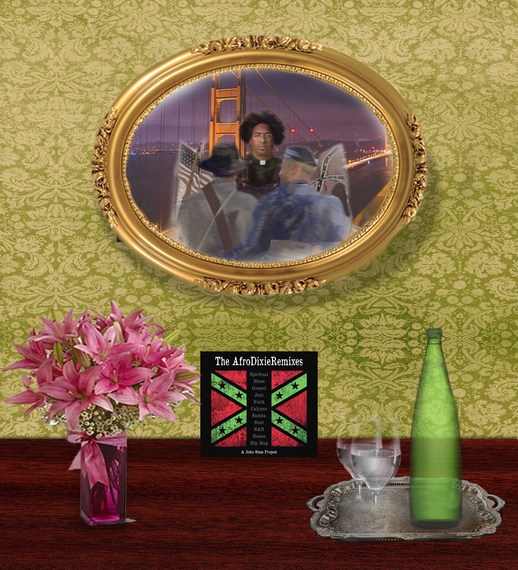 This performance piece features me officiating the marriage of two soldiers: one Confederate and one Union. It is set to be staged and broadcast live from City Hall in downtown San Francisco on Sunday, June 19th - "Juneteenth," the holiday that commemorates the emancipation of slaves from throughout the Confederate South. Following the wedding, there will be an AfroDixieRemixes listening reception at a jazz club in Oakland featuring 13 black music versions of the song "Dixie," with response poetry hosted by the Oakland Poetry Slam.

A week before the wedding ceremony, Annie Sprinkle and Beth Stephens, by way of their Pollination Pod, and I will host "The Confederate - Union Engagement: A Water Toast and Proposal Party." This performance is a part of the This is What I Want Festival, curated by Tessa Wills at Fort Mason Art Center, a former military outpost. The central theme of the toast is water: a force of life, truth, cleansing, and forgiveness. The performance will explore the complexity and synthesis of desire born out of conflict and nurtured by water.

This work is the final element of my 15-year project: Recoloration Proclamation, which has gone from SoHo to Harlem; from Gettysburg to Columbia, South Carolina; from burning and burying the Confederate flag all across the US, to a performative same-sex wedding in San Francisco on Juneteenth. I hope this journey, concluding with this wedding as a reunion, inspires an aggressive engagement to embrace art over violence, future over past, and love over fear.

For more info on The Wedding and The Water Toast and to view these events streamed live, go to johnsimsprojects.com/TheWedding and thisiswhatiwantfestival.com/watertoast