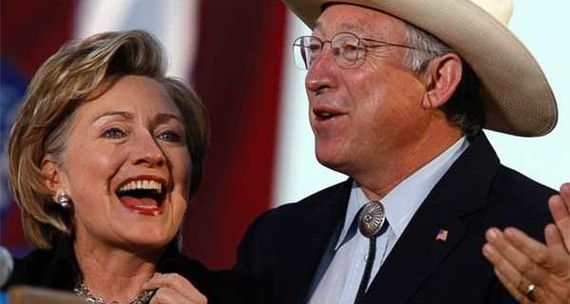 As Sen. Elizabeth Warren is fond of saying, "personnel is policy."

As Clinton herself wrote a year ago in an article co-authored with Sen. Tammy Baldwin in The Huffington Post, "Increasingly, American's trust in government is eroding. And a big reason for that is the so-called revolving door between government and the private sectors."

But the proof is in the pudding.

And looking at the people whom Clinton has appointed to her transition team, the progressive base of the Democratic party has good reason to worry that her administration would be stacked with Washington/Wall Street insiders who go back and forth through the revolving door.

The new head of the Clinton transition team is former Interior Secretary Ken Salazar, who walked through the revolving door to become a partner at WilmerHale, one of the most influential law and lobbying firms with a roster of major corporate clients. Salazar is an outspoken supporter of the Trans-Pacific Partnership, which WilmerHale has lobbied for. He is also a supporter of fracking, opposing voter initiatives that would limit the practice, stating they would "undermine business...damage our economy and kill jobs."

Here are some of the other members of the Clinton transition team:

● Tom Donilon is a former national security adviser, and former steering committee member of The Bilderburg Group, an elite organization whose mission is to "bolster a consensus around free market capitalism and its interests around the globe."

● Maggie Williams is a long-time Clinton confidante and former chief of staff of the Clinton Foundation.

● Neera Tanden is president of the Center for American Progress whose former head was Clinton campaign chair John Podesta. (Podesta's brother, Tony Podesta, is considered the most powerful lobbyist in Washington whose firm's clients include Walmart, Bank of America, Duke Energy, and the governments of Egypt and Saudi Arabia. In the past two years they've also received $900,000 in fees from supporters of corrupt, pro-Russian former Ukranian President Yanukovych, the same foreign oligarch from whom Donald Trump campaign Chairman Paul Manafort has received millions in consulting fees. Small world.)

● The other transition team members announced so far are Clinton insiders Ed Meier and Ann O'Leary.

In short, there's not a single member of the Clinton transition team who isn't a seasoned Washington insider and none with strong relationships to the accomplished men and women in the progressive Sanders/Warren wing of the Democratic Party.

If personnel is policy, the composition of the transition team is a telling sign that rather than implementing the progressive Democratic Party platform negotiated between Clinton and Bernie Sanders, a Clinton administration appears likely to ignore the progressive base and revert to "third way" neoliberalism and foreign adventurism.

The time to halt the march towards a Clinton administration stacked with corporate centrist Washington insiders is now, during the campaign. Once the election is over, the appointments train will likely be moving too fast to restrain.

Bernie Sanders had nearly 45 percent of the pledged delegates at the Democratic convention. In a parliamentary democracy in which Clinton headed a centrist party and Sanders headed a left-leaning party who allied to form a coalition government, the Sanders party would get a control of a significant number of government ministries.

The least Sanders and his voters can expect is reasonable representation in a Clinton administration, which means reasonable representation on the transition team that assembles the administration. And Elizabeth Warren--who was not shy about opposing even President Obama when he attempted to appoint Wall Street insider Antonio Weiss to a top Treasury Department position--should be entitled to the same in exchange for becoming one of Clinton's top surrogates and fund-raisers.

Sanders and Warren should be insisting that representatives from the progressive wing of the Democratic Party be added to the Clinton transition team, including people drawn from outside the usual group of Washington/Wall Street insiders.

Examples of the type of people might include Demos President Heather McGhee or progressive economist Joseph Stiglitz (both of whom are already rumored to be among the large circle from whom Clinton is seeking policy advice), former NAACP Chairman Ben Jealous, former Clinton Labor Secretary and Common Cause Chairman Robert Reich, and former Communications Workers of America President Larry Cohen.

In addition to their progressive political views, such transition team candidates have strong relationships with other accomplished progressives, not only in government and business, but in academia, nonprofit groups and community organizations.

Further, progressive organizations like major unions, MoveOn, the Campaign for America's Future, The Progressive Change Campaign Committee, Public Citizen, Democracy for America, among others - many of whom signed a recent open letter to Clinton calling for a politically diverse transition team and administration - should be assembling resumes and recommendations to submit for potential administration positions.

Given the danger posed by a potential Trump presidency, Sanders, Warren, and progressive organizations may have limited leverage to demand representation on the transition team in exchange for full-throated support of Clinton's campaign. But their level of support is still important in driving the voter turnout necessary to not only to win the presidency but to win a Senate majority and to reduce Republican's gerrymandered control of the House. Clinton still needs them and they should use all the leverage they have to politically diversify the transition team and administration.

Senators like Sanders and Warren can send a message to Clinton that they're willing to publicly oppose some of her nearly 1,200 appointments requiring Senate confirmation if she doesn't broaden her transition team and put forth a more politically and socially diverse group of nominees. The progressive movement can make it clear that they will actively oppose a President Clinton if she appoints a corporate centrist administration.

The time to act to influence the transition process, and the composition of a potential Clinton administration is now. Once the election is over, it may be too late.