Sarah Palin has been busted for so many lies in the past year and a half, it's become nearly impossible to keep track of them all. Whenever she opens her mouth, she simply cannot stop herself from engaging in duplicities, exaggerations and half-truths that not-so-coincidentally always distort the political record in her favor. It's a pathology.

She did it again this week during a somewhat contentious interview with Bill O'Reilly in which she chastised her Fox News host out the gate: "I kind of have a big beef with you too though, Bill, if you don't acknowledge that President Obama is wrong on his call for a need for energy policy." 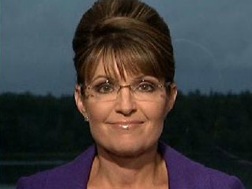 Perhaps the biggest joke being fobbed by Palin to the American public is that she is some sort of expert on energy issues. Sarah Palin isn't an expert on anything -- remember that this is a woman who didn't know the difference between England and Great Britain as she began her not-so-celebrated run for the vice-presidency -- and who quit her governorship after two-and-a-half years of failed leadership and being found guilty of "abuse of power" in the Last Frontier. It's all smoke and mirrors. She is fed a series of talking points by her advisers before each of her punditry appearances and then dishes them out in what my friends in Alaska have dubbed "word salads" -- without the dressing.

O'Reilly lied, too, of course, when he said, "I'm pleased to have you on the program tonight [as] there is not a governor in the United States who has more experience than you do dealing with the oil companies." Sarah Palin? The half-governor? Uh, Alaska isn't even the largest oil-producing state in the union. Texas is, followed by Alaska, California... and you didn't guess it: North Dakota. Is anyone touting current North Dakota governor John Hoeven as a national expert in resource policy? And why does everyone -- including Palin herself -- keep pretending that she is still governor?

As Andrew Halcro, the bright and witty Anchorage based businessman who ran against Palin for governor in 2006, wrote me yesterday: "Listening to Sarah Palin lecture on the oil-and-gas industry is like listening to Bernie Madoff talk about safe investing; zero credibility."

Remember, Halcro is someone from Palin's own party in Alaska. Indeed, Palin's mishandling of Alaska's natural gas and oil reserves in the Last Frontier turned nearly all interested parties against her by the time of her resignation -- from oil producers to environmentalists alike. Americans will recall her speech at the Republican National convention in which she claimed that "we began" to build a $40-billion natural gas pipeline "to help lead America to energy independence."

Only there was and is no pipeline. It has never been built. If it's ever built, it will be constructed not because of Palin but in spite of her.

Drill, baby, drill? Shill, baby, shill is more like it. Sarah Palin talks the talk, but she has never walked the walk in her life, especially when it comes to resource management. Not only did she quit her failed governorship, she also quit her appointed position to the Alaska Oil and Gas Conservation Commission after serving little more than a year. That's two-for-two in the last decade alone. Sarah Palin a doer? Hardly.

Here's one of Palin's big laughers from the interview. When asked by O'Reilly is "how to stop" the oil leak, Palin responded:

Got that, Bill? You betcha. Then there was the matter of her inflating her own resume again:

... as governor of Alaska, what I did in dealing with the oil companies and I'll betcha 75% of my time was being taken up by energy issues here in this state. I had to set up our Petroleum Systems Integrity Office [PSIO] so that we could be there on the front lines making sure what the oil companies were telling us was legit when they were dealing with their corroded pipes that we find out and other lax maintenance issues.

Only Palin didn't really "set up" the PSIO so much as reconfigure it as a photo-op session. A year earlier, her Republican predecessor, Frank Murkowski, had established the Arctic Pipeline Technology Team to "ensure the integrity of oil pipeline infrastructure and continued crude oil production."

Most significantly, a journalist friend of mine in Anchorage who has covered resource issues in Alaska for more than a decade assured me yesterday:

Aside from conducting pretty thorough reviews of some fires that broke out at BP-operated facilities on the North Slope, PSIO never really did anything. The gap analysis concerning coverage that was promised was never written. It's really hard to find any PSIO accomplishments at all...

I just this week received a massive dump of Palin's emails through an Alaska Public Records Act request. It provides a fascinating glimpse of how Palin dealt with the oil industry. Writing on her infamous private Yahoo account on which she conducted state business, Palin expressed her desire to host a fish barbecue in Juneau during the spring of 2007 for representatives from TransCanada Corp., which she essentially selected to build the pipeline. Here, in her inimitable own words:

Cool! We should cook it [salmon] for whomever needs to have that get-together reception opportunity....I'll let AGIA folks know the fish is a good opportunity to have folks over for informal gasoline chat....

Tonight's great for Todd and me--now these type of events can be quite informal and still be successful. There's a Costco in Juneau, if you know what I mean. And my family is quite capable of setting out food and cleaning up afterwards.

The level of "expertise" is astonishing. And, yes, Sarah, I think we know what you mean (wink).

Watch Palin's performance on O'Reilly closely. There is a deep inner anger boiling beneath the surface with every phrase she recites. Her smiles are forced and contrived. Each response is uttered in odd, staccatoed cadences, as though someone has pulled the string on a talking doll. Palin's currency in American politics is not her faux expertise on energy resources -- it's her inner rage. And those who share it with her tap into that common anger and see her as their leader. It is as ugly as it is dangerous.

Palin's pretentions and duplicities would all be a joke if the potential political implications were not now so serious. Sarah Palin is clearly positioning herself for a run at the presidency in 2012. Anyone who thinks otherwise is simply fooling themselves. My sources in Wasilla have assured me that Palin fully believes that "God has opened the door for her." With every Facebook lie she posts, with every Fox News distortion she spews, she is trying to reconstruct her tarnished image as an expert in resource production and foreign affairs. P.T. Barnum may have been right that there is a sucker born in America every minute. Sarah Palin is now their ring leader.