The International Association of Athletics Federation has decided that Caster Semenya, the South African runner whose gender identity stirred up huge controversy after her decisive win in the 800m race at the world championships, will be permitted to keep her title and prize money.

It is, without a doubt, the right decision.

But that does not mean that this is a moment to celebrate.

The debate surrounding Semenya's gender illustrates the real lack of understanding - around the world - for gender identity and the many permutations that exist within the spectrum of male to female. 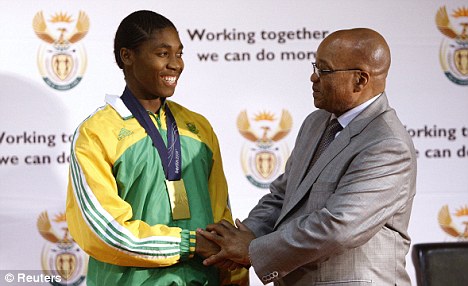 Semenya was subjected to gender testing because of her muscular build, deep voice and quick improvement in running times. In short, she just seemed too boyish to be a girl.

She was tested for not being female enough even though the kind of conditions required to disqualify a self-identified girl from competing in boys sports are quite extreme. In fact, according to the IAAF's own policy document on gender verification (2006), women can compete even if they are genetically male:

Conditions that should be allowed:

(a) Those conditions that accord no advantage over other females:
- Androgen insensitivity syndrome (Complete or almost complete - previously called testicular feminization);
- Gonadal dysgenesis (gonads should be removed surgically to avoid
malignancy);
- Turner's syndrome.

As well, athletes who choose to have sex changes are permitted to continue to compete in sport as long as they have completed a mandatory number of months in hormone therapy.

If we know that women presenting some male characteristics are still likely to permissibly compete with women, then why are we singling those individuals out for genetic testing? More importantly, how do we really define what is too male to compete in women's sport? And how do we distinguish being too male from being too tall, too efficient at using oxygen or too small? How do sex characteristics take on a level of importance above and beyond any other genetic advantage?

Well, I can answer that question: While we as a society are trained to celebrate strength, efficiency, natural talent and intelligence, we are not trained to celebrate those who stray from understood gender norms. Being too male is a serious transgression of social protocol, one to be punished and rectified.

But being born intesexed or identifying as a gender other than male or female might be no more of an advantage than Michael Phelps' arm span. They are simply aspects of an individual's make-up that assist their pursuit of athletic greatness. Nothing is stopping us from celebrating these athletes and their counterparts in everyday society as the unique and talented individuals they are.

I am happy that Semenya, after her long journey, will be recognized as an international athletic superstar. I hope that her struggle illustrates just how much work there is left to be done to promote understanding of and support for the variety of human gender expression all around us.