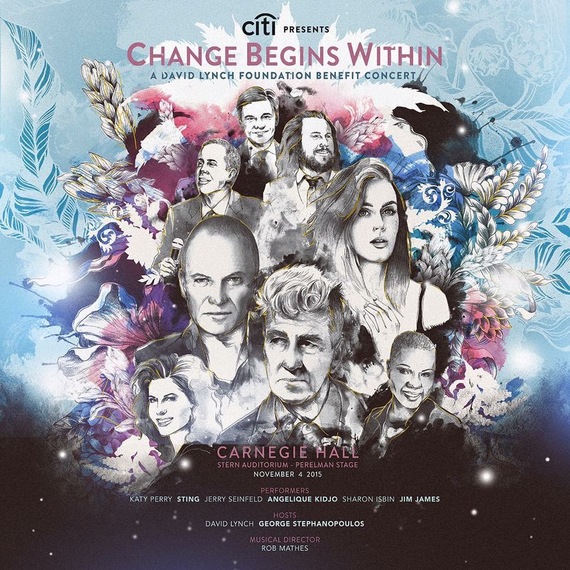 Last week I had the pleasure to attend the David Lynch Foundation’s Gala, Change Begins Within Benefit at Carnegie Hall in New York, presented by Citi.

When I first entered the media press area to get my pass, I was greeted by an amazing team of people that were so enthusiastic about the event that was going to happen. I caught glimpses of Patrick Stewart, Bob Roth, and some other notable attendees when I was handed my ticket.

When I got to my floor seat, I was so excited to be so close to witness probably one of the most entertaining and engaging events of the year. The audience was truly dressed to the nines and everyone wore a beautiful smile on their face because the majority of us were meditators, and the ones that were not might have quickly converted after such an impactful entertaining evening.

It all started when the MC, George Stephanopoulos, took the stage to talk about his experience of Transcendental Meditation. I was quickly drawn to his anecdotes and before we knew it, Jerry Seinfeld took the stage and told us all that he had been meditating for over 40 years. He continued to make us laugh and related to his amazing story telling that had us laughing and smiling inside out.

Soon after we got a chance to see the amazing and talented Sting take the stage to perform, which left everyone wanting more, his ability to make everyone sing with him is a gift. He is a legend and beyond.

Throughout the evening, there were amazing performances by Sharon Isbin, Jim James, and Angelique Kidjo. These performances would never be forgotten as they left a true mark on everyone that was in that room.

The finale to the evening was a gift from the pop gods with Katy Perry and her renditions of her most popular songs. She was amazing and everyone knew that this event revolved around the fantastic work of David Lynch, Bob Roth, and the David Lynch Foundation.

I usually attend these events for media coverage with my cameras, but earlier in the week I got a chance to get on a quick call with Bob Roth who personally said to come as a guest and enjoy the evening. For that, I am truly honored and grateful.

Transcendental Meditation has impacted so many people lives for the better. An organization that promotes this to people who don't have regular access to this type of education has to be commended and supported. Kudos to David, Bob and their amazing team!

For more information about the David Lynch Foundation and their work, check out https://www.davidlynchfoundation.org.