The world-renowned Royal Canadian Mint recently announced its new silver coin series, which is dedicated to wildlife in Canada; the initial offering features a wolf on the $5 denomination. Although the wildlife dedication is laudable, the irony of this announcement is inescapable given the level of persecution wolves endure across the country.

This is especially the case in the western province of British Columbia where an estimated 800 wolves are killed annually, primarily for the frivolous entertainment of hunters and trappers. The province takes a laissez faire approach in administering the hunting and trapping of wolves in BC, which is based simply on the reproductive potential of the species, and shockingly, without knowledge of wolf numbers. In addition, BC wolves are regularly subjected to government-sanctioned culls and lethal predator control actions.

Canadians love the iconography of big wildlife, like wolves, grizzly bears and cougars. Unfortunately, this fascination with animal symbolism fails to translate into policies that further the conservation and welfare of these large carnivores.

But the disconnect between symbolic adoration and on-the-ground reality isn't limited to Canada; the phenomenon is clearly North American-wide.

With state wildlife managers having proposed the perversely titled "conservation hunts" for wolves in Montana and Idaho, government administrators in the Northern Rockies are approaching the same level of disingenuousness and depravity as Japanese policy makers who have perpetuated the truly Orwellian concept of "scientific whaling." Fortunately, Montana's request to hunt endangered gray wolves has just been turned down by the U.S. Fish and Wildlife Service; not that the federal agency is opposed to the sport hunting of wolves, of course, but because in their estimation the Montana proposal would not survive a legal challenge. 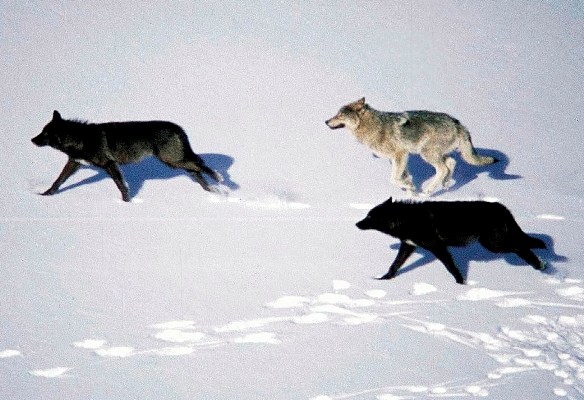 The ongoing exploitation of wolves in Montana and Idaho strikes a chord amongst wildlife advocates in Canada as the wolves targeted for extermination originate from north of the 49th parallel. Many Canadians had a sense that, on balance, NAFTA (the North American Free Trade Agreement) was likely going to be a net loss for Canada in a variety of ways, but had no idea that free trade meant allowing Canadian wolves to be exported to the Northern Rockies and then subjected to the fear and loathing of reactionary American ranchers and sportsmen's groups, as well as regressive Intermountain West government agencies.

If Canadians wanted to persecute their wolves, there was no need to ship them south; Canis lupus is sufficiently under siege in the "great white north," with provincial governments scapegoating wolves for everything from the precipitous decline of mountain caribou to the near-extinction of the Vancouver Island marmot.

The aforementioned points reflect a disturbing but common trait among provincial, state and federal "environmental" agencies in jurisdictions throughout North America - specifically, an obsessive predilection that drives wildlife managers to reflexively default to the oxymoronic tactic of conservation-by-killing. Given the evidence (i.e., the body count), coming to the conclusion that government agencies which "manage" wildlife essentially operate as death cults is not difficult. Countless policies are designed to harm or kill wildlife, particularly large carnivores. The euphemisms used to describe and camouflage such killing - e.g., "cull", "harvest," "control" - speak volumes about the underpinning philosophy (i.e., the so-called North American Wildlife Management Model) of these agencies.

Raincoast Conservation Foundation large carnivore scientists Drs. Paul Paquet and Chris Darimont have written that "wolves have complex social traits . . . they are keenly sensitive and caring animals and are known to mourn for extended periods when a group member is killed. Hunting of wolves by humans likely has severe ecological effects that are difficult for scientists to study and may take generations to become evident."

The direct killing of wolves, whether by trophy hunting, trapping, or lethal control, is a harsh addition to the numerous and significant challenges Canis lupus already faces in a human-dominated landscape.

In their seminal new paper, Wildlife conservation and animal welfare: two sides of the same coin?, published earlier this year in the journal Animal Welfare, Paquet and Darimont write that "In most parts of North America where wolves persist, human disturbance has already, or is now, displacing wolves from favourable habitat. Additional disturbances, additive to current background disruption, may surpass the level of habituation or innate behavioural plasticity that allows wolves to cope with human encroachment."

The recreational and institutional killing of wolves also adds to the myriad human activities Paquet (also an advisor to Project Coyote) and Darimont describe as creating a diminishment of the species' quality of life:

"Given a choice, wolves prefer to avoid humans. However, extensive and growing convergence of human activity and wolf habitat has seriously compromised the availability and effectiveness of wolf habitat worldwide, reducing the distribution of wolves to a fraction of their original geographic range. Accordingly, disruptions resulting from human influence combined with unrelenting and lethal antipathy have created an impoverished environment that may not sustain surviving wolf populations into the future. Fuller et al (2002) summarize all the various means by which humans purposely cause harm and (typically, but not always) death to wolves. These include but are not limited to aerial hunting, deadfall traps, large fishhooks, guns, poisoning, snares, and traps. If wolves do persist, we wonder what diminished quality of life must be endured to survive in a human-dominated landscape."

We are at a pivotal time in our planet's history with regard to species diversity and conservation in the face of ever-increasing human expansion and exploitation of what remains of "nature." How we conserve large carnivores - and in particular wolves, which have been such an iconographic species for so long- may bode to the future of how we are able to coexist with other sentient beings with whom we share this earth- and ultimately with each other.