Though I enjoy following politics and have had many lively conversations about the presidential campaign, I have hesitated to write about it given the polarizing nature of such things - and the fact that one person's non-partisan observation can quickly be perceived by another as a partisan insult. 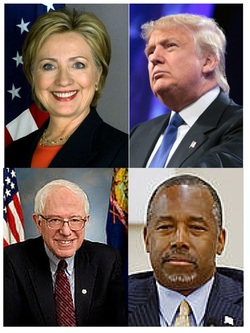 Yet as a public relations professional, it's difficult to ignore what Stephen Colbert called "the big orange elephant in the room," meaning Donald Trump. He's turned one side of the political landscape on its head, and while you may think he's soon to flame out, it's impossible to ignore the fact that he has brought a level of authenticity to the race that hasn't been seen before. Therefore, it's time for me to weigh in.

Part of a classic strategy to win the White House in recent decades has included the following:

This strategy has worked for about 30 years, but then along comes "The Donald," riding in on his gilded escalator to announce his candidacy for president without a teleprompter and nary a note. Right out of the box, he started filling the airwaves with luscious sound bites: blasting illegal immigrants, critiquing all manners of foreign policy, and challenging anything or anyone who he believes stands in the way of America's future greatness. Trump, who seemingly says whatever pops into his head, has probably said a dozen things over the past several months on the campaign trail that would have ruined any other candidate. Yet he perseveres; thrives, even.

On the Democratic side, Bernie Sanders preaches a message of inclusiveness (or of combatting exclusiveness) that many voters find new and different - in large part because it is delivered in an authentic manner.

I think many Americans are tired of the way candidates have been communicating. For example, in an effort to figure out what resonates with voters, Hillary Clinton spent $1.2 million on polling services in the third quarter of 2015. This overly measured and scripted approach that worked so well for 30 years may have run its course in favor of greater authenticity. Trump--and to a lesser extent, Sanders and Dr. Ben Carson--appears to have struck a vein.

Trump says things that many people are thinking (or fearing), and many of his racy statements would be perfectly acceptable if communicated at a local bar. However, they somehow sound "wrong" in the context of a presidential campaign. Some call him crass. Others shrug him off. But many continue to listen.

I'm reminded of the 1997 movie Private Parts about the life and career of Howard Stern. Among many highlights, Stern had an ongoing feud with his program director who didn't like Stern and wanted him to tone down his radio show. When the program director (nicknamed "Pig Vomit" by Stern and played wonderfully by Paul Giamatti) asked for listener data, he was told that the average Stern fan listened to the show for an hour and a half because they "wanted to hear what he'll say next." Much to his chagrin, Pig Vomit also learned that the average Stern hater listened for two and a half hours. Why? Because they "wanted to hear what he'll say next."

Of course, Stern is an entertainer, but he has parlayed his authenticity into an empire. Perhaps that's what we are thirsting for. We want our politicians to be a little less staid and bit more unpredictable - more authentic.

Whether Trump can make it to the finish line is anyone's guess, but I think his candidacy will have an impact for many years to come. I don't know if I will vote for Trump, but I still want to hear what he will say next.

What does this mean for those of us who aren't running for office? Whether you call it creating authentic PR content or a return to storytelling, I think most PR and marketing pros should take note of what's happening on the campaign trail. If the average voter is growing tired of scripted and predictable messaging, then you can bet that they don't want to see and hear the "same old, same old" from you, either. You need not go the extreme route of Trump or Stern, but authenticity can only work in your favor.