In the Jerusalem Hills, there stands the single largest memorial to the Holocaust in the world known as Martyrs' Forest, which is comprised of six million trees planted in memory of those six million Jews who perished. A unique ceremony, the only one its kind held on Holocaust Remembrance Day in the capital, will take place there this year to commemorate the heroism of Jews who rescued fellow Jews during the Holocaust.

Keren Kayemeth LeIsrael (KKL-JNF) and the B'nai B'rith World Center have for the past 13 years held a joint ceremony dedicated to those Jewish rescuers. This year's event, held at the "Scroll of Fire" Plaza on Thursday morning, April 16, will pay tribute to Rabbi Moshe Shimon Pessach, an outstanding rabbinic and communal leader in Greece whose efforts saved the Jewish community of Volos, a coastal port city, from the German Nazis.

Rabbi Pesach, born in 1869, initiated and orchestrated the rescue of the Jewish community with the help of the Bishop of Volos, Joachim Alexopoulos and other non-Jews, saving 74 percent of the Jewish community in a country where 85 percent of the Jews were murdered in the Holocaust. On Rosh Hashanah, September 30, 1943, the German military governor Kurt Rikert summoned Rabbi Pessach to his headquarters, demanding a list of all the Jews in the city and their assets within 24 hours. Rabbi Pessach was told that the purpose behind the demand was to determine the amount of food rations needed to sustain the Jewish community. 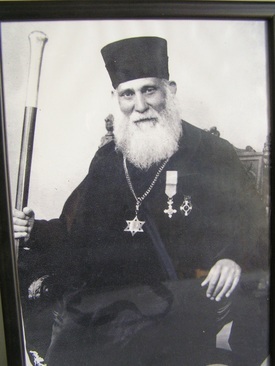 Photo: Courtesy of B'nai B'rith / Rabbi Moshe Pessach who saved hundreds of Jewish lives in Volos, Greece from the Nazis.

But the perceptive rabbi saw the real purpose of the Germans, and proceeded with a series of actions to rescue his community at great risk to himself and his family. After asking and receiving a three-day extension to submit the list, Rabbi Pessach then went to his friend, the bishop of Volos, to ask for his intervention and find out the Germans' intentions.

The bishop contacted Helmut Sheffel, the German consul in Volos, with whom he was on good terms, and who told him that the Jews must leave Volos immediately. Bishop Alexopoulos promptly informed Rabbi Pessach and gave him a letter addressed to the clergymen of the villages surrounding Volos, urging the countrymen to protect the Jews.

All but 130 Jews, were spirited away with the help of the mayor, municipal officials, the chief of police and the Greek underground to the surrounding remote mountain villages, including Rabbi Pessach and his family.

"We want to thank all those Greeks who provided the Jews of Volos with shelter, food and water during their hiding," Rabbi Pessach's grandson, Moris Eskanzi told Tazpit News Agency. Eskanazi will be accepting the "Jewish Rescuers Citation" award conferred by the Committee to Recognize the Heroism of Jewish Rescuers During the Holocaust and the B'nai B'rith World Center on behalf of his grandfather who passed away in 1955.

We don't know the names of those Greek villagers who helped out the Jewish community and hid them in their homes and nearby caves and shared their food -- to their own great personal risk...

But we want to thank the kind hearts of those villagers, who the Germans would have killed had they known of their efforts.

After the war, Rabbi Pessach returned with 700 members of the Jewish community to Volos, having suffered his own family tragedies from the Nazis. Because of his rescue efforts, the Germans had put a bounty on Rabbi Pessach's head during the war. The Nazis captured and murdered two of Rabbi Pessach's sons who taught Judaism in Salonika and Didymoteicho, and Rabbi Pessach's wife died while they were in hiding.

During the war, Rabbi Pessach also established a unit of partisans that rescued allied soldiers and fought the Germans. The Greek King Paul and the commander of the Allied forces in the Mediterranean decorated Rabbi Pessach for his actions. Rabbi Pessach became the chief rabbi of Greece after the war in 1946.

"My grandfather was respected by Jews and Greeks alike and he always gave help and advice to all before and after the war," said Eskanazi. "He was one of them, my grandfather, and the Jews were accepted by the Greek community."

Rabbi Pessach's good friend bishop Alexopoulos was recognized posthumously by Yad Vashem as Righteous Among the Gentiles in 1977 following the request of the Jewish community of Volos.

The organizers behind the Jewish Rescuers Citation Award ceremony view believe it is especially important to expose Jewish youth to the phenomena of Jewish rescue during the Holocaust as a model for Jewish solidarity and courage.

"We believe that the topic of Jewish rescue during the Holocaust for the past 70 years hasn't received the attention it rightly deserves," said the director of the B'nai B'rith World Center, Alan Schneider. "There were thousands of Jewish rescuers who saved countless Jewish lives, who many people don't know about."

At the ceremony on Thursday, members of the underground Zionist youth movement in Hungary during WWII will also be recognized for their rescue efforts as will Yaacov (Jacko) Razon, a Greek-Jewish boxer who helped other Jews survive at Nazi concentration camps.

Since the creation of the Jewish Rescuers Citation in 2011, around 100 awards have been presented to Jewish rescuers who operated in Germany, France, Hungary and Holland.