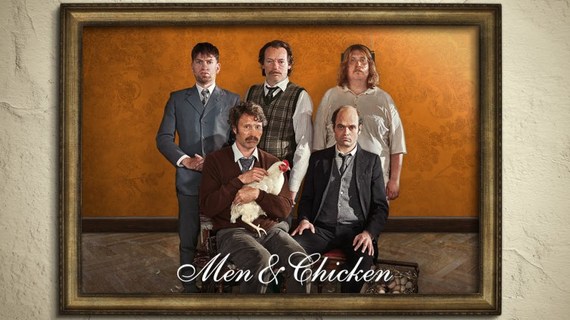 I was ecstatic when the narrative jury of the Sarasota Film Festival - New York Academy Director of Programs and Membership Patrick Harrison, Masters of Sex actress Caitlin FitzGerald and me - picked the Danish comedy "Men & Chicken" as our Best Feature. Not every jury is fortunate enough to have so many quality films to choose from, but we opted for Anders Thomas Jensen's comedy because, frankly, it was so strange and entertaining it blew our minds. We had to come up with a rationale, so we said: "For its balls-out surreal and comic portrayal of men - and chickens (and bulls, too)."

We also gave a shout-out to the star of the ensemble, Mads Mikkelsen and his equally mad perm. This was not the suave and menacing, psychologically astute and devilishly handsome cannibal Dr. Hannibal Lecter of the addictive CBS show Hannibal that was meant for the edgier HBO. Nor was it the continental casino villain Le Chiffre in Casino Royale. Both characters have an excess of smug. Not here, where the Danish actor plays an onanistic sad-sack named Elias, his hare-lip half-hidden beneath a porn star mustache. On his father's death that he and his professor brother Gabriel (David Dencik) actually had a different biological father - and did not share a mother.

Their late father's ridiculously mis-shot (he's visible from his naked knobby knees down) final video sends the two mismatched yet inextricably linked siblings on a road trip to the distant island of Ork in search of their biological father - and, for the sterile Gabriel, answers to the mystery of why his life is so massively messed up. Once there, the duo discover three additional hare-lipped half-brothers, holed up in their father's rambling chateau surrounded by chickens, ducks, pigs, sheep - and a sole virile bull.

So much for plot, because like a modern oedipal Three Stooges, these men continually devolve into flights of pee-in-your-pants slapstick beatings using anything from rolling pins to stuffed swans to establish dominance and submission. What is truly beautiful ugly about the film is that at no point does the audience know where it's going. Like the brothers, we embark on a journey into the freakishly unknown. While their acts seem random and chaotic, and the connections and disconnections between the reunited siblings are absolutely absurd, yet there is a nimble plan that organizes all the mayhem into a coherent and even touching whole.