The wars in Iraq and Libya are over, and Afghanistan is winding down. As President Obama has repeated, "the tide of war is receding." So why are we still spending one-third more on the military than the Cold War peak, double the level of the 1990s -- some $9,000 a year per American household?

Apparently, Americans believe that the post-9/11 world is more dangerous than ever, brimming with existential threats. This belief, however, is delusional. Hard evidence shows the opposite to be true.

First of all, the world's big, uniformed national armies with all their heavy weapons are no longer fighting each other anywhere. Those head-to-head clashes have produced the deadliest and most destructive wars -- India versus Pakistan, Iran versus Iraq. Today's wars are smaller-scale insurgencies with different and less expensive military requirements.

Second, wars are confined to smaller areas of the world than in past decades, and the fighting is more localized. Whole regions consumed by war a decade or two ago, such as Central America, the Balkans, and West Africa, are now at peace. We don't need to be everywhere all the time with 11 super-expensive aircraft carriers.

Third, when researchers count the world's deaths from war violence, the numbers today are a third lower than during the Cold War. It doesn't feel that way because war reporters are eager to tell us of the horrors of whatever wars remain, and some horrible ones do remain. Nevertheless, we live in a less violent world overall than any in memory. 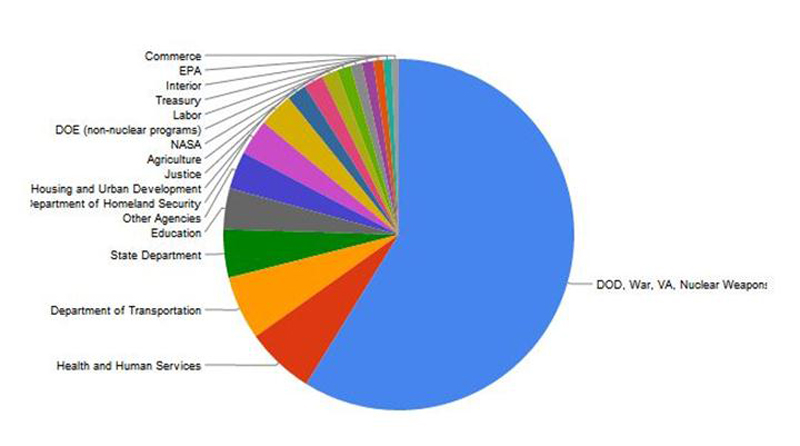 While military spending must prepare us for future dangers, not just today's situations, are those dangers really greater than 30 years ago? The Soviet Union is long gone. China has not fought a single military battle in 25 years, and its leaders depend on trade-based prosperity, not war, for their legitimacy. The world's nuclear arsenals have been reduced by three-quarters in the past 30 years, and further cuts have been agreed upon.

Are we spending so much to train our allies' counter-terrorism units, to buy more drones, or to build up our special forces? No, those things are relatively cheap. Rather, we are spending huge amounts to prepare for a major state-to-state war using heavy formations in massive air, land, and sea operations. In other words, to stop the Soviet Red Army from invading West Germany or to fight land wars in Asia like Vietnam or the invasion of Iraq.

Last February, then-Secretary of Defense Robert Gates said that any American leader who would "again send a big American land army into Asia or into the Middle East or Africa should have his head examined." As Gates points out, the defense bureaucracy plans for "high-end conflicts" based on "what transpired in the last century." Gates has also noted the "wasteful, excessive, and unneeded spending" that bloats today's military budget. That's a defense secretary speaking, not an Occupy Wall Street protester.

To adjust to our radically changed world, the diminishing threats we face, the end of our decade of war in Iraq and Afghanistan, and the changing nature of warfare, the military brass and politicians have a plan -- 5 percent cuts from our current record-high spending. That would leave us way above Cold War levels, still matching the rest of the world combined.

What we need instead are deep cuts, phased in over some years in a well-planned process. Even returning the spending levels of the 1990s, half today's total and one-third below the Cold War peak, would leave us with the world's largest and most capable military force by far.

It's true, military leaders can do their jobs best with unlimited resources -- but so could teachers and firefighters whose budgets we are slashing in the face of massive deficits. In a country whose economic weakness is far more dangerous than any military threat, big cuts in defense spending simply must be on the table.

And don't say that military spending creates jobs. Study after study has shown that the same money invested in education, infrastructure, or other productive activities creates far more jobs than military spending.

America's wars are ending, and heavy tank formations cannot solve what ails this country. It's time to end the delusion of a violent, threatening world and stop wasting money on forces we no longer need. Trimming by 5 percent just isn't going to cut it.