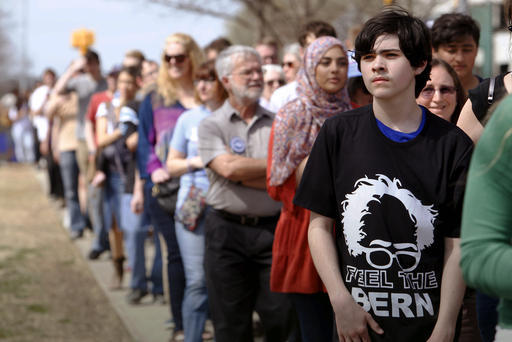 For a full year -- from early 2015 to early 2016 -- Sanders supporters were told that superdelegates pick whoever they believe is the strongest general-election candidate.

They were told this, first and foremost, by the 359 superdelegates who endorsed Hillary Clinton before even a single American had voted. These superdelegates were making a clear statement about how their endorsement had been earned: not by popular votes or delegate counts, but by their own determination that Clinton had the best chance of all of her competitors -- most of whom hadn't announced their candidacies yet, by the way -- of winning in November of 2016.

Thereafter, specific superdelegates came out to double down on this premise that superdelegates don't choose a candidate based on votes or delegates but on electoral viability. For instance, earlier this spring Howard Dean took a lot of flak from progressives when he said that his assessment of a candidate's likelihood to bring the Democrats victory in the general election would trump any other consideration.

And they went on to make clear, through their candidate and otherwise, that they plan to overturn the superdelegate system as soon as they can -- indeed in 2016, if possible.

They also said that, until superdelegates are eliminated, they'll play by their rules.

What those rules state is this: if a front-runner emerges who's unable to secure the Democratic nomination using pledged delegates alone -- and note, it only takes 59 percent of the pledged delegates available to do so -- superdelegates will choose a nominee based on their assessment of each candidate's electoral viability.

What happened next was that the Clinton campaign fell apart.

After winning more than 60 percent of the pledged delegates through March 1st, Clinton is now likely to lose the majority of pledged delegates awarded between March 2nd and June 14th -- a two and a half month period that makes up roughly the final two-thirds of the Democratic nominating process.

But it isn't just this -- as striking a fact as it is -- that has caused real concern about whether Clinton can win in the fall. It's also that Clinton's unfavorables have risen to historic levels; that Clinton performs consistently worse than Sanders against Donald Trump in both general election and battleground-state polling; that there are states (for instance, Georgia, Arizona, and Ohio) that polling shows Sanders would win and Clinton would lose in the general election, along with many others (among them New Hampshire and Pennsylvania) where Clinton is in a dead heat with Trump and Sanders wins handily; that Clinton loses independent voters to Trump while Sanders wins them overwhelmingly; that Clinton can't draw crowds with even a fraction of the numbers or energy that Sanders' crowds routinely have; that Clinton isn't considered nearly as honest or trustworthy as Sanders, according to every poll of voters; and that a movement candidate will be needed to defeat Donald Trump, whereas, instead of a movement candidate, what Clinton is giving the Democrats is Al Gore 2.0.

The problem, in sum, is that Clinton is looking like a clear November loser, and Sanders a probable November winner.

That Sanders is likely to win the two-thirds of the Democratic primary that comes after Super Tuesday is just one piece of this larger picture.

What happened next is that the DNC, with the collusion of the corporate media, changed all the rules.

Ignore what we said in 2015 and as late as February of this year, the media and the DNC told Sanders and his supporters. When we said superlative electoral viability was the gold standard for securing a superdelegate's vote at the Democratic National Convention in late July -- assuming no one has clinched with pledged delegates alone -- what we meant was that if Clinton is leading in votes and delegates on June 7th, all of her opponents must shut down their campaigns immediately and endorse the Secretary forthwith. Why? Because that's what Hillary did in 2008, and you have to do whatever Hillary did in 2008.

There is (these scions condescendingly assured Sanders' millions of supporters) no June-to-mid-July process in which a candidate makes his or her pitch to superdelegates either face-to-face or telephonically, as we told you there was; there is, in fact, no ongoing discussion about electoral viability at all, come to think of it. Didn't we tell you all along that whoever was leading in votes and delegates on June 7th would be immediately declared the winner of the Democratic nomination, and that superdelegates simply rubber-stamp the election results, whatever they may be?

No, that's not what you said.

And that's not what you said in 1984 when you created superdelegates, either.

In 1984, the Democratic Party created superdelegates to keep weak front-runners from getting the nomination if it seemed to a clear majority of Party officials that that front-runner couldn't win in the fall.

In 1984, Democrats were still worked up about the fact that Ted Kennedy almost took the nomination from Party elders' then-favorite, Jimmy Carter, despite the fact that, in these elders' estimation, Kennedy was a likely loser in November. (As it turned out, Carter was.) So Democrats created superdelegates to make sure the Party never nominated someone who didn't have what it takes to win in November -- no matter how that candidate may have performed in a vote in Alabama taken three months ago.

But the Democratic Party is giving those supporters a false narrative.

It's then asking them to be stupid enough to swallow it whole.

Rather than making Secretary Clinton spend June and most of July making the case to superdelegates and the nation that, despite having failed to clinch the nomination with pledged delegates alone and being wildly unpopular with independent voters, she's a viable general-election candidate -- which would be a tough case for her to make, given all the general-election data currently available -- the DNC is going to hand her the nomination a full fifty days before superdelegates have to decide which candidate they're going to support. In other words, the Democratic Party changed the rules in midstream; and what's worse, they're now lying about doing so.

It's actually perverse: the Democratic Party is now playing the innocent in the face of a widespread consternation and sense of disillusionment that their own actions produced. There's a term for this -- treating someone poorly and then acting astonished at their all-too-predictable response, indeed doing all you can to make your victim think they must be going crazy -- but as it's never yet been successfully applied to politics, I won't use it here.

The more important thing is that if CNN, or the DNC, or the Clinton campaign want to know what Sanders supporters are angry about, it's what I've just told you.

The only question now is how the media and the DNC and the Clinton campaign make it right.

The onus isn't on Bernie Sanders to urge his supporters -- who think for themselves and aren't looking for a strongman to guide them, whether Sanders or anyone else -- to accept a stuffed donkey in place of a real one, it's on Democratic Party elders and their allies in the media to explain how what's happening in the Party now isn't a wholesale rewriting of Party rules, principles, and procedural history.

If the Party -- using the media -- can make that case, and/or if they can make the case that Sanders can't win in the fall but, despite all evidence to the contrary, Clinton can, she will secure the overwhelming majority of Sanders supporters. If, instead, they choose to collude with the Clinton campaign to prematurely declare a "clinched" victory fifty days before any such victory can be clinched; if they continue to play shenanigans at state nominating conventions and then denigrate the legitimate (nonviolent) reactions those shenanigans produce; if they continue to do everything possible to alienate Sanders supporters and indeed assure them that they and their ideas will have no place in Clinton's White House or Clinton's Democratic Party, they will be handing Donald Trump the presidency as sure as they've already permanently disillusioned millions of Millennials with the lies they've already told.

And like any person with self-respect, neither Sanders nor any one of his supporters stands down in the face of a lie.

Now is the time to make it right, if you can. Be adults; be honorable. The alternative is to have only yourselves to blame for a Democratic loss in November.

There are only so many more times that Sanders supporters can blow the trumpet alerting you to the trap you've set for yourselves -- and, should Trump secure the presidency, the nightmare you've orchestrated for the rest of the nation.