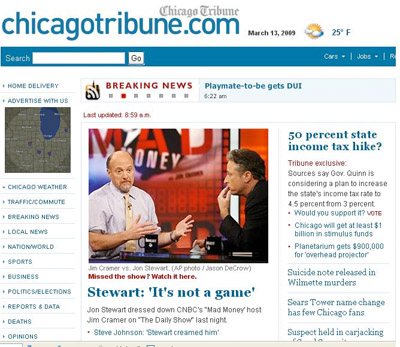 Yes, you're seeing that right: the Governor of Illinois (the new one, that is) floating a trial balloon about a 50% tax hike plays second fiddle to coverage of Stewart/Cramer (this discrepancy is followed up even more by Our Man in Chicago). 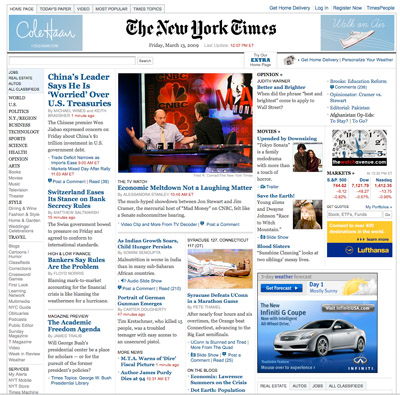 It took a little while for the Grey Lady to join in the fun, but she's touting the story big now. 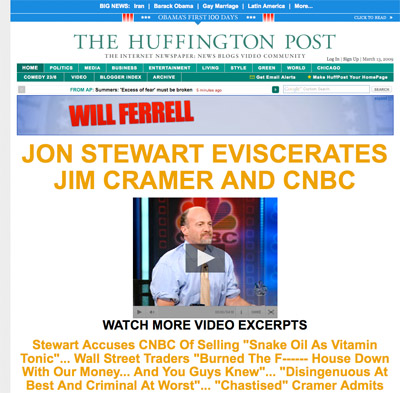 Yes, even this very website, touted as a standout of journalism's online future, gets in on the fun.

And why not, right? It's the thing everyone's talking about--in part because the media has built it up as something to talk about. Which is exactly the problem: it misses the point entirely.

Near the end of the interview (which, if somehow you haven't seen it, is worth watching), Cramer begins to weasel out an explanation to Stewart (the specifics are unimportant, but if you need to know it involved why Cramer utilizes banana cream pies in his financial program) when Stewart interrupts him and says, indignantly, "As Carly Simon would say, 'This song ain't about you.'" It was a point largely lost on Cramer, who continued to defend his own show against Stewart's much larger indictment, but it was also a point lost on the many media outlets that covered this basic cable dustup as actual, honest-to-god news.

You see, Stewart's real critique wasn't about Cramer, it was also only marginally about CNBC. Instead, Stewart's real rage comes from the role the modern media has created for itself: the role of cheerleader instead of watchdog, of favoring surface over depth, of respecting authority instead of questioning it.

Just take a gander at some of the other leads around the web--surprisingly, Stewart didn't actually command attention from everywhere: 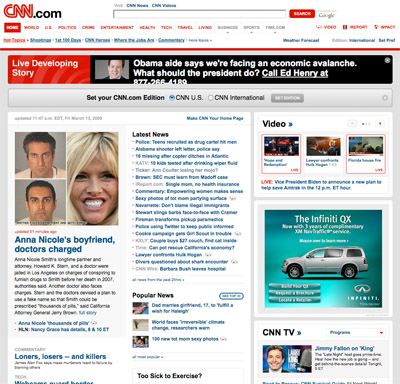 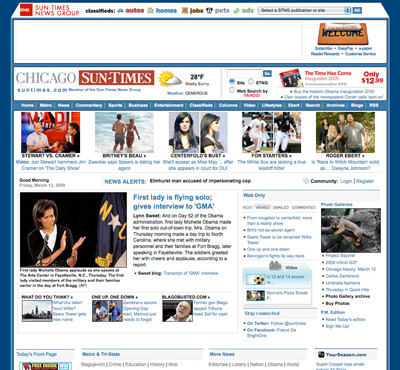 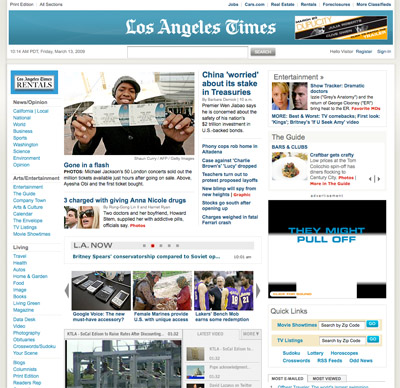 But none of these stories--Ana Nicole Smith, Michael Jackson tickets, Michelle Obama giving an interview to Good Morning America--pass muster either. None of them address the issues of our time with the fearless tenacity that Stewart brings to his show most nights, and he's a comedian.

When we can't compete with a comic in terms of speaking truth to power, then it's more clear than ever that journalism in the US has lost its way. It comes as no surprise then when, as newspapers crumble around the country, a report like the one released by the Pew Research Center this week says that only 33% of people would miss their local newspaper "a lot." When you lead with a story about an interview that happened on a comedy show--and it's the very same story that almost everyone else is leading with as well--what's to miss?

What's to miss--the refrain is always repeated--is the investigative reporting that helps to keep our leaders honest, our water clean, our businesses pure. What's to miss is people asking fearless questions to those that need them asked. What's to miss is the deep pockets that can fund a reporter to dig and dig and dig until she's able to uncover some fragile truth. And yes, that stuff is vital to the functioning of a democracy. It also, let's speak the truth here, doesn't happen very often.

Traditional news organizations have nothing to lose right now. Why not take a gamble at the one thing they haven't tried: being fearless. Stewart would probably appreciate the company.