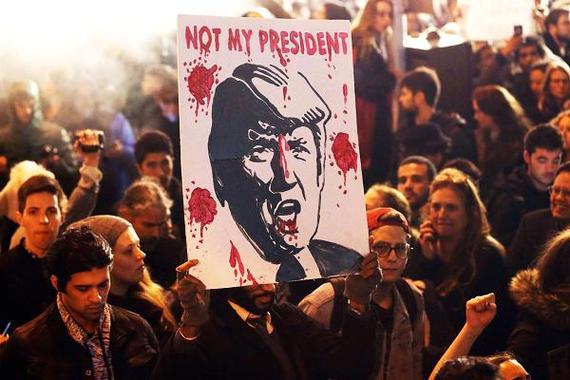 After the French Revolution, it was said that the left and the right didn't just dream of defeating each other. They dreamed of annihilating each other. Something like that is happening in the United States. We've gone from political polarization to total war.

In total war, the enemy is considered illegitimate. Republicans have a long history of challenging the legitimacy of Democratic Presidents. In 1998, the Republican House of Representatives impeached Bill Clinton. This year, the Republican Senate refused to consider Barack Obama's Supreme Court nominee. Donald Trump threatened to jail his Democratic opponent.

Democrats are finally returning fire. They are warning the press not to "normalize'' Trump by treating him as a legitimate President. Outraged Democrats are preparing opposition research to use against Trump's cabinet nominations. Democrats may lack the votes to deny them confirmation, but they intend to make the process as painful as possible. A spokesman for one group told Politico, "Our goal is to help Senate Democrats keep Trump historically unpopular throughout his Administration, starting with these nomination fights.''

Meanwhile, the Trump transition team is assembling a "war room'' to defend the President's nominees, complete with "media sherpas'' to guide them through the process.

A Trump honeymoon? Forget it. It will be more like a partisan fight to the death. Trump is doing what he can to keep the campaign going. The President-elect proudly called his supporters "wild beasts . . . nasty and mean and vicious.'' A Democratic consultant described Trump's post-election victory tour as "less of a `Thank you' tour and more of a `Be ready to fight' tour.''

The Trump presidency poses an existential threat to Democrats. Newt Gingrich predicts that the legacy of President Obama "is all going to disappear within a year'' of Trump's taking office. So progressive Democrats are organizing an anti-Trump resistance movement.

A group of Democratic state attorneys general are making plans to file lawsuits if the Trump Administration carries out what they regard as unconstitutional policies. That's exactly what Republican attorneys general did during the Obama Administration. Eric Schneiderman, New York's Democratic Attorney General, has already sued Trump over false claims made by Trump University -- and won a $25 million settlement. "Life just got a lot more exciting for those of us at the state level who are now the first line of defense,'' Schneiderman told the New York Times.

Trump may have won the election by the rules, but Democrats insist his victory was not legitimate. Hillary Clinton carried the national popular vote by nearly 3 million. Her problem was where she got those votes. The Cook Political Report separated 13 battleground states from the states that were not competitive. Clinton won the non-competitive states by more than 3.7 million votes. She piled up huge majorities in states where she didn't need the extra votes. Like California, which Clinton carried by 4.3 million votes.

The Trump campaign focused on the battleground states and it paid off. He carried the 13 swing states narrowly (by about 816,000 votes out of 46 million). The closeness of the vote didn't matter. Trump got the electoral votes.

Democrats cite other factors that cast doubt on the legitimacy of the outcome. Like interference by the FBI and by Russian hackers. And the exit polls, in which 61 percent of voters said Trump is not qualified to serve as President.

Each of the last four Presidents got elected on a pledge to bring a deeply divided country together. They all failed. In his election night victory speech, Trump said, "It is time for us to come together as one united people.'' Who is he kidding? Electing Trump -- the Great Divider -- is a sign that many Americans have given up on unity.

Trump brought something new to the GOP: a crude populist message. He used trade, immigration and white identity politics to solidify Republican support among working class white voters. "I love the poorly educated,'' Trump said after winning the Nevada Republican caucuses. White voters without a college degree may be a declining share of the electorate. But at 34 percent of voters this year, they still represent a considerable prize. Especially in swing states.

At the same time, Hillary Clinton reeked of condescension when she called Trump supporters "deplorables.'' The gap between the educated elite and the rest of the country has never been so large. In the view of Vice President Joe Biden, as reported by the Los Angeles Times, there's "a bit of elitism that's crept in'' to Democratic thinking.

Democrats can't survive if they concede the populist message to Republicans. What Democrats desperately need is a candidate with progressive values and a populist style. Someone who can connect with ordinary voters. Bill Clinton did that in the 1990s. His wife did not. Is there a Democrat with that rare combination of qualities?

Actually, there was. Sen. Bernie Sanders is certainly progressive, and he also showed considerable populist appeal in the Democratic primaries. While Sanders drew strong support from highly educated white Democrats, in many states he did even better among white Democrats without a college degree. To compete with a Trumped-up Republican Party, Democrats need a younger Bernie Sanders without the socialist baggage or the obsession with Wall Street. Sanders has defined the role. Now Democrats have to find a candidate who can fill it.