Sure, a pet's diet primarily consists of pet food, but every once in a while, some dog and cat owners mix things up a bit and give their animals a taste of human food. Be careful, warns veterinarian Barbara Royal. Here are several "treats" she advises her clients to avoid when it comes to feeding furry companions.

In Dr. Royal's practice, a lot of animals come in with allergies or chronic problems. That's when she notices a surprising correlation between these types of issues and the trick that many owners use to medicate their pets.

"I found out that they've been giving all the medications in peanut butter," Dr. Royal says. "So, they stop the peanut butter and everything gets better."

You'd do better to throw away your leftover pizza crust, rather than share it with your pet, Dr. Royal advises. And that's not the only food she suggests avoiding.

"That comes under my long list of things, which is: no corn, no wheat, no soy, no white potato in foods. In processed foods, they'll include the skin, and in the skin is solanine, which is [a] really toxic substance," she explains.

Save the pretzels and potato chips for yourself, Dr. Royal says.

"The salty foods, they're going to be more inflammatory," she points out. "You don't want to be feeding those to your pets."

So what should you feed your dogs and cats?

"Stick to things that would make sense to them evolutionarily," Dr. Royal says. "More like meat treats or things that are going to make sense to their body -- cats even more so [than dogs]. They're obligate carnivores, so they absolutely really shouldn't be eating food other than mostly meat. They should have high protein, high fat [and] low, low, low carb. Not more than 5 to 10 percent of their food should be carbohydrates."

Also on HuffPost: This is what happens when you give a pig her own pet

PHOTO GALLERY
Pets At The Dinner Table
Download
Calling all HuffPost superfans!
Sign up for membership to become a founding member and help shape HuffPost's next chapter
Join HuffPost 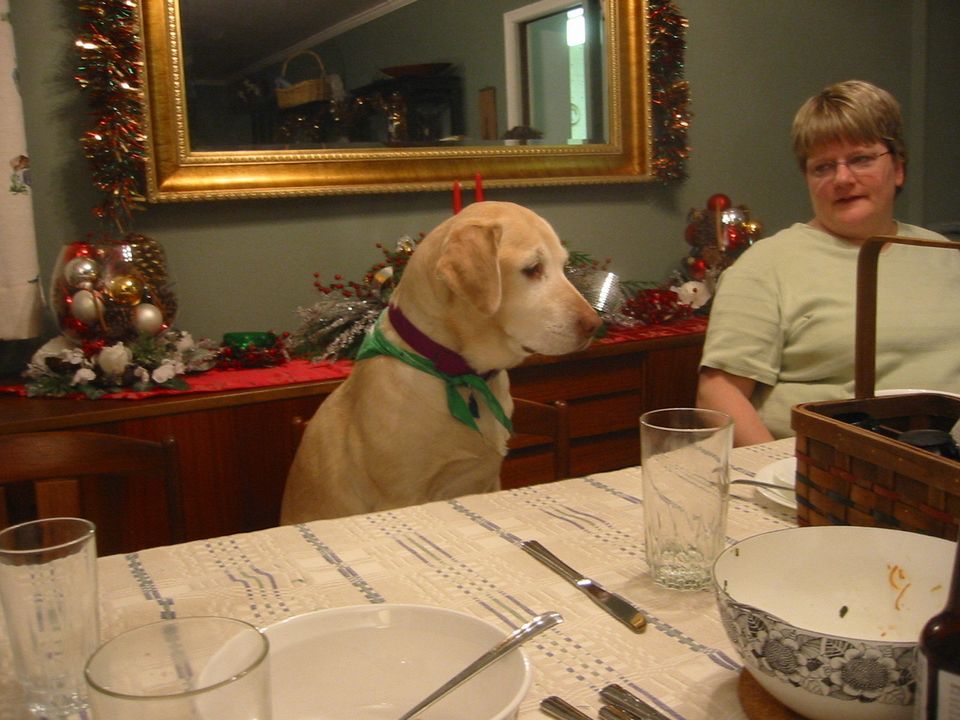