Here in Baltimore, like many other predominately Black cities, Black millennial women aren't fans of Republicans. Forgive me for generalizing- we're not fans of presumptive GOP nominee Donald Trump, and it's not related to our tendency to vote Democrat. As Brittney Cooper, a millennial and assistant professor of women's and gender studies and Africana studies at Rutgers University, puts it: "Nothing is more dangerous to people of color, particularly black and Latino people, than angry white men with power and no attendant sense of ethics, morality, or justice". Cooper accurately described Trump; as of right now he arguably has a better chance of appealing to White millennial women (and even that's uncertain).

Black millennial women are pragmatic and hypersensitive to Trump's hyperbolic statements, and this should make him anxious. Because to quote the New York Times: "We're living in an era when blacks have essentially played kingmaker in the most important elections in the nation (thus also the world)." Black women voters turned out at the highest rates of ANY race/gender subgroup in both the 2008 and 2012 elections. More than 70 percent of black women voted in 2012, out-voting white women by over four percentage points. As millennials, Black women are highly adaptable, exhibit attitudes distant to millennial stereotypes, and raise the most culturally diverse generations to date, generation Z and generation Alpha. For Black millennial women to find Trump's agenda even remotely engaging, he must start making our concerns his concerns as well.

Trump recognizes that Black Millennial women, like most women, define success as being entrepreneurs and accomplishing educational, career and financial goals. Between 1997 and 2013, Black women-owned businesses grew by 258 percent and made $226.8 billion in revenue. He favors lower tax rates, which at first glance would benefit both Black women-owned businesses. But Trump's lower tax rates could lead to hidden taxes for customers via raised prices on goods and lower salaries for employees.

Or perhaps Trump entertained Black millennial women- at best- with his view on education, stating "we can't forgive (student) loans, but we should take steps to help students". Black millennial women do contribute a larger portion of our salaries to repaying student loans than men, which disproportionately affects us and exacerbates our wage gap. In the 2007-08 academic year 81 percent of Black graduates with a bachelor's degree graduated with student debt compared to 64 percent of White graduates.

Millennial parents are known for teaching their children individuality, but because children of Black millennials are exploring new avenues it has helped the entire Black community reach a cultural revolution. Now more than ever, schools deliberately educate Black members of generation Z and generation Alpha on science, technology, engineering and math (STEM) careers. Athletically, more Black children participate in sports once considered reserved for other races, like swimming, gymnastics, skateboarding and lacrosse.

Data also suggests Black millennial moms are highly inclined to stress the importance of education to our children: 79% of Black parents say it's extremely or very important our children earn a college degree and 43% say a college education is a requirement to be part of the middle class. By comparison just 22% of white parents consider college education a requirement (presumably because they're more likely to already be in the middle class or higher).

Nevertheless when compared to White millennials, our transformation hasn't stopped Trump from considering Black people lazy. It also hasn't stopped his disparagement of the Black Lives Matter movement, which strives for a world where Black lives are no longer systematically and intentionally targeted for demise, deprived of basic human rights and dignity. As I parent I appreciate Trump's great relationship with "the Blacks", but agree with political strategist and parent Catalina Byrd:

"As a millennial in the era of the Black Lives Matter movement I couldn't vote for Trump because of the way that he has characterized the movement, calling protesters thugs and condoning violence against them from his supporters. All it says to me is that if my children were killed not only would he not feel as though they deserve justice - he would think anyone that attacked me for seeking justice on my own is justified in any action that they take to oppose me. That is not American, that is not presidential to me, I see no place for me or my family in the America Trump speaks of."

As a man less concerned with facts and more interested in incitement, Trump most likely hasn't researched the real face of Muslims in America. According to the New York Times, Trump kicked off his campaign by calling for a temporary ban on all Muslims entering the United States. Without distinguishing between mainstream Muslims and Islamist terrorists, he also insinuated that American Muslims were all but complicit in acts of domestic terrorism for failing to report attacks in advance, asserting without evidence that they had warnings of shootings like the recent one in Orlando.

The truth: according to a 2009 Gallup report, Black people are the largest race represented within the Muslim American population. Muslim American women are one of the most highly educated female religious groups in the United States, second only to Jewish American women. Demographically, Muslims have a median age which falls within the millennial generation, making them the youngest of all major religious groups. Lastly, if current demographic trends continue, the number of Muslims is expected to exceed the number of Christians by the end of this century.

I wonder... does Trump realize without much effort, he's inadvertently managed to alienate Muslims and Black millennial women at the same time?

Inaccurate attempts to profile millennials have glossed over the diversity of the generation born 1982 to 2000, but to win the presidency Trump must move past targeting to White millennial men, pay attention to Black millennials and care that Black millennial women aren't his biggest fans. The fact is, this year marks the first presidential election in which millennials will make up the same proportion of the U.S. voting-age population as Baby Boomers. Millennials could have a strong influence on the 2016 election in 10 critical states, and nearly 40% of millennials aren't White (of this figure 13% are Black).

On a lighter note, by chance my husband and I had the opportunity to talk with music artist Lupe Fiasco before boarding a flight to Paris. It's serendipitous he summated how Black millennial women feel about Trump. 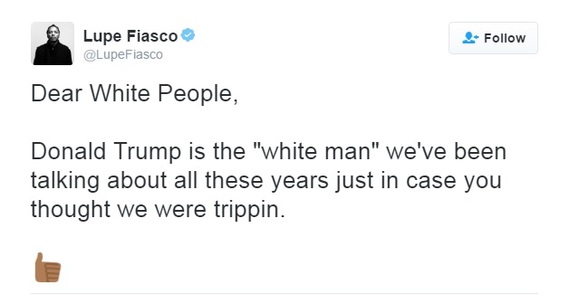