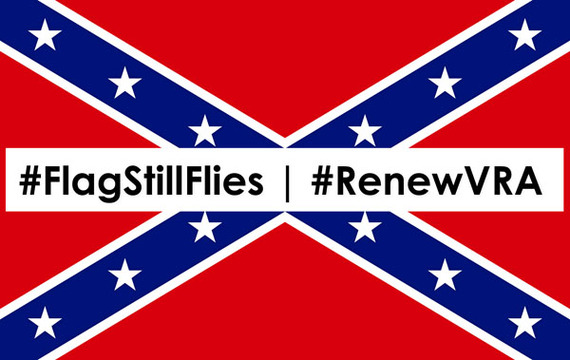 In the wake of the horrific, racially motivated murders at Emanuel AME Church in Charleston, S.C., Americans united behind a common goal.

The Confederate Battle flag -- an emblem of hate, bigotry and racism -- was lowered in South Carolina earlier this month.

While taking down this banner of oppression is a good step, it's really nothing more than a symbolic gesture.

| Watch Rep. Johnson's House floor speech on the Confederate flag and the VRA | 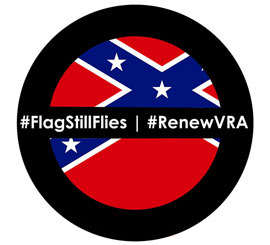 As President Barack Obama said in his eulogy for the slain Rev. Pinckney, taking down the flag would be "one step in an honest accounting of America's history," but allowing ourselves to "slip into a comfortable silence" on difficult issues facing the country would be "a betrayal of everything Rev. Pinckney stood for."

We cannot allow taking down the flag to distract us from more meaningful reform, such as addressing the resurgence of voter suppression laws and other schemes designed to rig the elections in favor of powerful interests that have arisen following the Supreme Court's decision in Shelby County v. Holder that weakened the Voting Rights Act (VRA).

In their 2013 Shelby decision, the conservative Supreme Court struck a dagger in the heart of the law protected voting rights for decades. Legislating from the bench after ignoring the factual data set out in the legislative history supporting congress' extension of the Voting Rights Act, the Court held 5-4 that the decades-old law used to protect minority voting rights had outlived its usefulness.

The Court ignored the rash of voter suppression laws sweeping across the country. Unnecessary and extremely burdensome voter identification laws passed to fix a non existent problem are the modern means of achieving what poll taxes, literacy tests and blatant discrimination previously accomplished -- the disenfranchisement of African-Americans before the Voting Rights Act was passed in 1965. After the Court seriously weakened the Voting Rights Act, states and local governments are now free to build on existing voter suppression laws and enact unprecedented restrictions on voting rights.

Almost immediately, mostly Southern states previously under the VRA's purview -- began to put up road blocks that make it harder for minorities to vote -- including strict voter ID laws, an end to same day registration and cuts to early voting and weekend voting.

Take the case of disenfranchised Army Spc. Timothy Patillo, 26, who was prevented from casting a ballot due North Carolina's new restrictive voting laws that are now the subject of a U.S. District Court trial.

According to an article in the Huffington Post, Patillo tried to register to vote in the 2014 elections after returning from an overseas deployment. But due to red tape and poor communication from the DMV, he missed the deadline to register despite the fact that he had all his documentation in order and was prepared to register.

As the article stated:

We know that Chief Justice John Roberts's main argument in gutting the VRA was that the law was outdated. He said discrimination against minority voters may have been pervasive in the 1960s when the law was passed, but "nearly 50 years later, things have changed dramatically."

In a report released in 2014 by the Leadership Conference on Civil and Human Rights, it found 148 separate instances of voting discrimination since 2000. And in a partial measure of the Shelby ruling's impact, a recent Brennan Center report noted that voters in 15 states now face restrictions at the polls that didn't exist in 2012.

We also know that according to a study by J. Morgan Kousser, a professor of history and social science at the California Institute of Technology, there were more than 4,100 voting-rights cases, Justice Department inquiries, settlements and changes to laws in response to the threat of lawsuits around the country where the final result favored minority voters.

It found that from 1957 until 2013, more than 90 percent of these legal "events" occurred in jurisdictions that were required to pre-clear their voting changes. The study also provides evidence that the number of successful voting-rights suits has gone down in recent years, not because there is less discrimination, but because several Supreme Court decisions have made them harder to win.

The evidence is clear: Without updating the VRA and enforcing strong pre-clearance requirements in jurisdictions with histories of denying Africans-Americans the right to vote, we will always be a few steps behind.

That's why I'm demanding that the leadership on the Judiciary Committee take up legislation to restore the VRA.

In the Jim Crow era, the Confederate battle flag flew over states and counties where African Americans were systematically denied the right to vote. Brave men and women of all races fought against this anti-American and anti-democratic status quo. Many died in the fight. Eventually, the battle for voting rights was won with the passage of the Voting Rights Act of 1965.

In striking down the heart of the Voting Rights Act, the Court might as well have given license to once again hoist the Confederate battle flag above voting booths in the South and across this country.

Though this emblem of hate, bigotry and racism was lowered in South Carolina, where the Civil War began, it continues to fly figuratively where it does the most harm - in the voting booth - until the VRA is restored, and all Americans can freely exercise their right to vote.

Now that the flag has come down from the South Carolina Capitol, it's time to bring it down for good by passing legislation to restore the Voting Rights Act.