A new study led by East-West Center researchers and funded by the National Science Foundation has confirmed suspicions that "peri-urban" areas at the outer fringes of cities are particular hot spots for the emergence of animal-to-human infectious diseases. 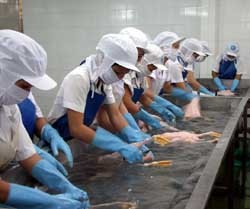 The study led by EWC researchers Sumeet Saksena and Jefferson Fox and published in the open-access journal PLOS ONE, focused on outbreaks of the highly pathogenic avian influenza, or HPAI, strain H5N1 in Vietnam between 2003 and 2005, which resulted in 45 million bird deaths and 106 confirmed human cases with 52 deaths. Their research concluded that the outbreaks in large part sprang from converging environmental and social risk factors brought on by development in these rural-urban transition zones (peri-urban areas), confirming what is known as the "convergence model" of animal-human disease emergence.

"Our research model for the first time presents data-based evidence for the common-sense notion that the process of urbanization combines risk factors to produce peri-urban landscapes with significantly higher potential for infectious disease emergence," said lead researcher Saksena.
The study notes that these areas have higher densities of domestic chickens, ducks and geese living alongside dense human populations, creating ideal conditions for HPAI transmission. Previous research suggested that disease outbreaks can be associated with environmental changes as societies evolve, but this is the first study of its kind to examine land-use diversity as a risk factor for H5N1. "Land-use diversity serves as a proxy measure for mixing of virus host species," said project Principal Investigator Fox.

Since 2003, the virus has killed millions of poultry birds in countries throughout Asia, Europe and Africa, and 402 humans have died from it in 16 countries, according to World Health Organization data as of January 2015. Just this year in the Midwestern United States, 48.8 million poultry were affected across 21 states with a strain of HPAI - although it is important to note that this strain is not a threat for spread to humans. The biggest known outbreak of bird flu in U.S. history, the epidemic has hit flocks in Iowa and Minnesota the hardest, where producers are scrambling to implement bio-security measures.

The East-West Center promotes better relations and understanding among the people and nations of the United States, Asia, and the Pacific through cooperative study, research, and dialogue. Established by the U.S. Congress in 1960 and based in Honolulu, Hawai'i, the Center serves as a resource for information and analysis on critical issues of common concern, bringing people together to exchange views, build expertise, and develop policy options.