Much about the Catholic Church can be quite monumentally awe-inspiring. It's designed to be, after all.

Often it's in a good way. From the Pope's elevating addresses to vast crowds in St Peters Square - as well as to the Orbe, our wider electronically-watching world - all the way through to that same Pope memorably washing the feet of disabled men and women.

But the horrific worldwide scandal of sexual abuse by priests, and the Church's decades of cover-up, will inevitably fall into another category.

But in what category can we file an awe-inspiringly stupid decision like the one currently roiling the New York Archdiocese?

As an economy drive (brought in large part upon itself by vastly expensive settlements of sex abuse lawsuits) the Church is closing buildings and merging parishes throughout the country. In New York the authorities have blundered into a remarkably insensitive piece of bad PR - decreeing closure for the archdiocese's one specialist church catering for deaf congregants.

It's St Elizabeth's church on Manhattan's Upper East Side - which draws deaf worshippers from all over the New York area, some of them traveling 60 miles or more to be there. 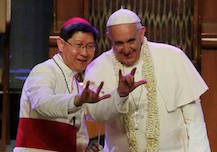 It was designated a "deaf church" by Cardinal Archbishop Terence Cooke 35 yeas ago.

Cooke reputedly had a soft spot for the deaf community - not unlike today's Pope Francis, who's been at pains to learn some sign language (with the help of Filipino Cardinal Luis Antonio Tagle, right). 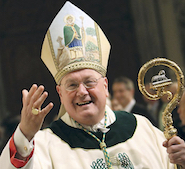 New York's present-day Archbishop, Cardinal Timothy Dolan (left), though well-known for his conviviality, doesn't appear to share his fellow-clerics' concern for the deaf.

In fact his administration has displayed an oddly tin ear over St Elizabeth's. His office did not respond to my requests for a statement or an interview with Dolan, while I prepared a report for this week's edition of "Religion and Ethics Newsweekly" on PBS.

I've known NY Archdiocese spokesman Joe Zwilling for almost ten years and I know him to be a deeply compassionate man. An inevitable conclusion to draw about the official silence is that the insensitivity must come from the top - the very top in New York, at least.

But hierarchy being what it is, the disgruntled congregation of St Elizabeth's can go higher - and they have. Their appeal to the Vatican for Dolan's decision to be reversed has now been lodged.

We can wait with great interest to see how Rome adjudicates on this small matter (in the Church's universal scale of things, that is) ... under a Pope about whom Vatican senior communications advisor Greg Burke has famously said: "Compassion and suffering with others is something Pope Francis has a knack for".