Warning: readers who are prone to seasickness may not want to proceed any further, because we're going to talk about how waves go up and down... and up... and down. A test project off the shores of Oahu, Hawaii is using a special buoy to collect wave power and turn it into electricity. While the idea isn't new, this is the first time that such a buoy has been connected to the grid and is actually producing usable power.

The buoy, named Azura, absorbs wave energy from both up-and-down and side-to-side motion, the first design of its kind. Right now, it's producing just 20 kilowatts, which seems a bit weak given its 45-ton size, but if the tests are deemed successful and commercial buoys follow, they may be able to generate between 500 kilowatts and 1 megawatt, according to Northwest Energy Innovations, which has parked the buoy at the U.S. Navy's Wave Energy Test Site in Kaneohe Bay at a depth of 100 feet. 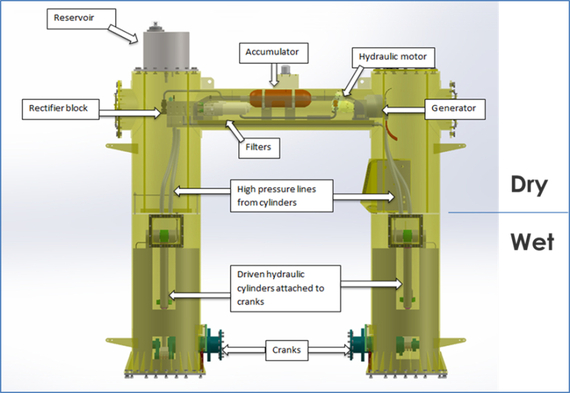 After earlier tests in New Zealand and Oregon, Azura is getting serious scrutiny now for its ability to capture wave energy in 360 degrees, collecting power from both the heave (vertical) and surge (horizontal) motions of a wave. It includes an onboard generator that converts kinetic wave motion to electricity, which is then transferred to land through an undersea cable. "As the first grid connected wave energy device in the U.S. that will be tested and validated by an independent party, this deployment marks a major milestone for our team and the marine renewable energy industry," Northwest Energy Innovations founder and CEO Steve Kopf said in a statement.

In contrast, other wave energy buoys, such as Aquamarine Power's Oyster design in Scotland, sit almost entirely underwater and pitch backward and forward in waves near the shore. The movement of flaps drives hydraulic pistons that push water under pressure through a pipeline to drive an onshore hydroelectric turbine that can deliver 800 kW.

Hawaii would make a great customer for Azura. Heavily reliant on imported fossil fuels for power generation, the state has the nation's highest electricity rates, a sad irony given the opportunities on the islands for solar, wind, and other forms of alternative energy. But that may change within a few decades. In June, Governor David Ige signed legislation setting a goal for Hawaii to generate all its electricity from renewable sources by 2045. "As the most oil-dependent state in the nation, Hawaii spends roughly $5 billion a year on foreign oil to meet its energy needs. Making the transition to renewable, indigenous resources for power generation will allow us to keep more of that money at home, thereby improving our economy, environment and energy security," Ige said in a statement.

In fact, Hawaii has already shown leadership. It has the highest penetration of rooftop solar installations in the nation, and as of April, had almost 3,000 pending installation applications on Oahu alone -- according to Hawaiian Electric, which has struggled in the past to integrate solar-sourced energy into its grid at the speed its consumers demand.