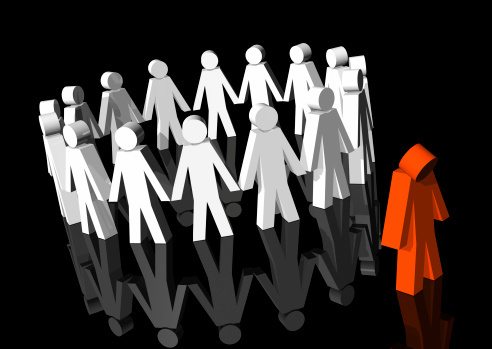 This past week, the hashtag #BlackOnCampus erupted in a firestorm of activity as people took to Twitter en masse to have a much-needed discussion about racism and what it's like to be an African American on many college campuses.

The flurry came after months of racial tensions that culminated in the resignation of top officials at the University of Missouri. Related protests continue to spring up across the country and I hope they spread like wildfire because this is a discussion we need to be having. But in having this discussion, it's imperative to recognize that this isn't just about whites and blacks. It's time we start talking about other communities that are being overlooked and forgotten. It's time we talk about being #NativeOnCampus, too.

When I said as much on Twitter late Wednesday night, and as I shared some of my own experiences and encouraged others to do the same, I was immediately assailed by racists and trolls. "Sounds like everyone wants to have a big cry session," one person told me. Another told me to "Get real dude, who made you virtuous?" Yet another went so far as to blame President Obama, telling me that we "might as well add whites on campus; this racism begins w/BO and his black America."

As all of this was going down, one person asked me a question that I'm sure is on the minds of many people critiquing this movement, comfortably, from their positions of privilege: "Whatever happened to just being a student on campus?"

What happened was that the color blind and assimilationist approach inherent in being expected to "just be a student on campus" has resulted in abuse, negligence, and racism.

Like many Native American students, I speak from experience. When I was an undergrad, I faced being kicked out of the dorms and with being brought up on drug charges at two different universities for having the audacity to smudge while I prayed alone in my room. As I explained to my dorm personnel, "smudging" is a common Native American spiritual practice that involves safely burning a small amount of sage or sweetgrass while we pray. For many Native Americans, it's an integral part of our ways of life. It's a part of who we are. It's also an expression of our religious freedom, protected by the First Amendment.

But that didn't stop them from telling me I could be expelled from the dorms. And it didn't stop other Native American students I've known from being frisked, from being read the riot act, or from having their rooms searched. And, like me, it didn't stop dorm personnel from taking the sacred things away from them that they needed to pray.

Stories like these are not uncommon, and too often they go unheard. To me, such experiences help explain why organizations like the National Indian Education Association report that only 39 percent of American Indian and Alaska Native students pursuing their dreams at a four-year institutions graduated in 2012, compared to 60 percent of their white peers.

It's time for that to change.

For that reason, I created the #NativeOnCampus hashtag to extend the #BlackOnCampus dialog. My hope was that it would help create a space for discussion about the experiences of Native American students across the country.

The response was fast and revealing. Within minutes, I received dozens of likes and retweets. Amidst the flurry, people began telling me about their own experiences with being #NativeOnCampus. One person shared his outrage about not having Native American classes in a state whose largest minority population is Native American. Another told me about what it was like being called a drunk. These are discussions we need to be having.

Privilege is not knowing that you're hurting others and not listening when they tell you. From the responses of those who attacked me and others for talking about what it's like being Native American on campus, it's clear that many people are blind and deaf. They are blind to their privilege and to the impact of their words and actions. They are deaf to the truths we're telling them.

But this is about much more than the discrimination that many Native Americans experience on college campuses. It's about effecting broader social change. It's about our right to be heard.

But that doesn't mean we're going to shut up and take it. We might be so outnumbered on many college campuses as to be invisible, but that doesn't mean we should be expected to just blend in, to check our identities and ways of life at the door. And we won't be written off, as another person described us, as "bogus malcontents on campus."

Native Americans come from every walk of life. In the U.S., we number 5 million strong, but our voices touch the lives of tens of millions more. We are in every state and in every major university. And together we will be heard.

DaShanne Stokes is a Lakota and Caucasian writer, speaker, commentator known for his work advancing civil rights and social justice. He is also a doctoral candidate at the University of Pittsburgh and recently completed a memoir about his experiences.