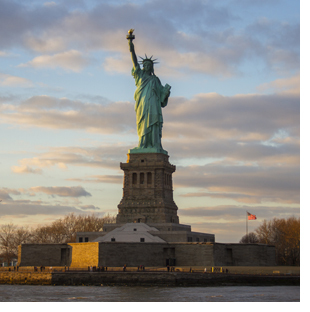 In the wake of the deadly Paris terrorist attacks, NPR's Robert Siegel interviewed Dr. Jean-Paul Fontaine, head of the emergency department at the Hospital Saint Louis regarding his experience the night of November 13. Hospital Saint Louis was one of the front lines of Paris' emergency medical response, located only meters away from the Le Carillon café bar and Le Petit Cambodge restaurant, two of the terrorists' targets.

When Mr. Siegel asked Dr. Fontaine about the number of gunshot victims he normally sees, Dr. Fontaine replied "One..."

"One per year," replied Dr. Fontaine.

Siegel was incredulous. Dr. Fontaine added, "In Paris, that's not like in the USA, you know?"

Back in the USA, many states have responded to the impending ISIS terrorist threat by closing their borders to Syrian refugees and arming themselves to the teeth.

Texas Governor Greg Abbott sent a letter to President Barack Obama informing him that the State of Texas would not accept any refugees from Syria.

"Given the tragic attacks in Paris and the threats we have already seen, Texas cannot participate in any program that will result in Syrian refugees -- any one of whom could be connected to terrorism - being resettled in Texas," Governor Abbott said in the letter.

"Neither you nor any federal official can guarantee that Syrian refugees will not be part of any terroristic activity," Governor Abbott continued. "As such, opening our door to them irresponsibly exposes our fellow Americans to unacceptable peril."

Gauging the scope of that peril is challenging, though statistics offer some clues.

Over the decade between 2002 and 2012, an average of 126 people were shot to death each year in France. For the same period, an average of 953 people were killed in Texas each year by firearms. Texas' population is less than half that of France. If Texas had as many people as France, and its per-capita homicide-by-firearm rate remained unchanged, 2,374 of its residents would have been killed each year in the same period -- 19 times the number of homicides by firearms in France.

Here's the remarkable thing about these numbers: none of Texas' 12,162 gun homicides were caused by ISIS terrorists. Zero. As unbelievable as it may seem, Texans are actually killing each other -- by the thousands.

Texas is not alone.

During that same period, how many Americans have been killed by foreign-born terrorists?

This number is slightly higher than the number of Americans who have been killed on Black Friday during the same period. Americans are over 40 times more likely to be killed by lightning than by an ISIS terrorist.

Still, no matter how remote the odds of death by terrorists, it's prudent to be prepared for any threat (unless, of course, that threat comes from fellow gun-toting Americans). Oddly, the states that are best prepared to mount an armed resistance to ISIS terrorists are also the ones that appear to be the most fearful of Syrian refugees. Coincidentally, these are also the states whose residents kill each other in the greatest numbers: 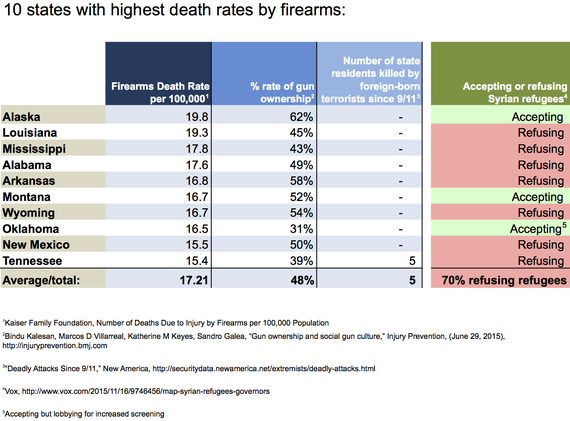 Stranger still, states with less than half the per-capita armament of the top 10 are the ones most willing to welcome Syrian refugees. These states' gun homicide rates are less than a third of states with the most firearms: 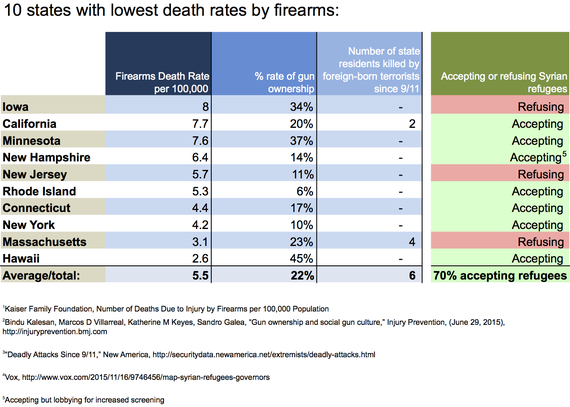 Perhaps the most perplexing statistics are these: a comparatively defenseless country, with only one-third the number of guns per-capita as the United States, has made the commitment since the Paris attacks to settle 30,000 Syrian refugees - 1450% more Syrian refugees per-capita than the United States. Over 100 years ago, that country, France, presented the United States with a sculpture, La Liberté éclairant le monde, or "Liberty Enlightening the World." Millions of immigrants, including the vast majority of our ancestors, have known the Statue of Liberty as a beacon of hope for a better life. Inside the monument, the words of Emma Lazarus' "The New Colossus" have spoken to generations of foreign-born that constitute this nation of immigrants:

Give me your tired, your poor,
Your huddled masses yearning to breathe free,
The wretched refuse of your teeming shore.
Send these, the homeless, tempest-tost to me,
I lift my lamp beside the golden door!