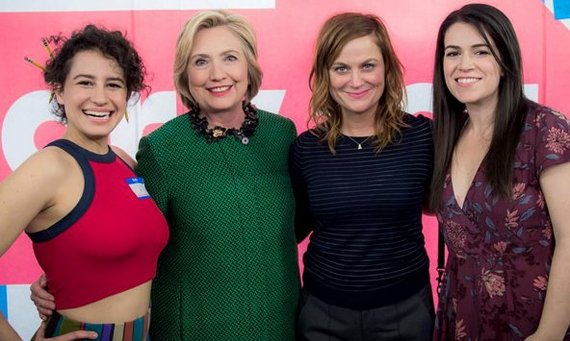 Over the past several months, the Clinton campaign and its celebrity supporters have worked hard to convince the American public that "Hillary" is synonymous with feminism. On the campaign trail, Lena Dunham stated, "Our first female president would send a message that we are here. We are ready to lead. In fact, she has been leading all along." In a pro-Hillary video posted on YouTube, Jamie Lee Curtis said, "I want my President to make decisions on my behalf based on her experience, her command, her intelligence and from her big, warm, embracing feminine heart." Countless other celebrities -- Amy Poehler, Shonda Rhimes, Kerry Washington and Katy Perry to name a few -- have all endorsed Clinton, proudly declaring #ImWithHer and celebrating Clinton's bid for the Presidency as a historic feminist victory.

It would be historic to have a woman in the White House. But if we are to embrace a feminism that concerns itself with more than the inclusion of women (particularly wealthy white women) in corporate capitalism and US imperialism, then we need a President who is willing to challenge the status quo. We need a leader unafraid to stand up to a system that idolizes profit at the expense of human decency, and who will work to replace it with one that serves the interests of all its citizens. Hillary Clinton has never aspired to this.

On the contrary, Clinton has gained much of her success by forging mutually beneficial alliances with some of this country's most powerful corporations. Consider her relationship to Walmart. A longtime friend of the Walton family, Clinton served on the board of Walmart from 1986 to 1992. Even as Walmart waged a major campaign against labor unions seeking to represent store workers (the majority of whom are women), Clinton remained faithful to the company, declaring, "I'm always proud of Walmart, and what we do and the way we do it better than anyone else." In her 2003 book Living History, Clinton wrote that CEO Sam Walton "taught me a great deal about corporate integrity and success." The Walton family, whose fortune is valued at more than the net worth of the poorest 127,600,000 Americans, has donated millions of dollars to the Clinton Foundation, and hundreds of thousands to Hillary's presidential campaign.

Even more disturbing is Clinton's predilection for military occupation. During her time as Senator and as Secretary of State, Clinton staunchly supported military operations in Iraq, Afghanistan, Libya and Syria and strengthened political ties with dictatorships across the globe for US economic gain. Her assertion that her vote for the Iraq War was "the best decision I [could've made] with the information I had" is deceitful considering that prior to voting, she neglected to read the 92-page classified National Intelligence Estimate (NIE) on Iraq's weapons of mass destruction circulated to the Senate for review by the Bush administration. The NIE went into great detail about the objections raised by the State Department and Department of Energy to claims of nuclear-weapons in Iraq, and led multiple senators, including Bob Graham of Florida, to vote against the war resolution.

As a critic of Hillary, I have had my integrity as a feminist called into question by friends and acquaintances, as well as by public figures on more than one occasion this year.

The most egregious example of this type of public shaming took place this past February, when Madeleine Albright told a crowd of Hillary supporters at a middle school in New Hampshire that "there's a special place in hell for women who don't help each other."

As a woman who strongly supports other women, I do not appreciate being told that I am going to hell for embracing a feminism that does not glorify identity politics or concern itself only with the women at the top of our society. Women are free to support whatever candidate they please (or none at all), but they should not feel shamed into voting for Hillary solely because prominent feminist icons say that their feminism mandates it. Gender and representation are important, but there are other critical issues relating to feminism which must be considered.

In renouncing Hillary's bid for President, I stand in solidarity with Honduran indigenous rights activist Berta Caceres who, before her murder last month, criticized Clinton for her role in the 2009 Honduran coup, which has led to nationwide violence and unrest.

I do not think Bernie Sanders holds all of the answers, nor do I agree with him on every issue. I am enormously frustrated by Sanders supporters who denigrate women, people of color and other marginalized groups for supporting Clinton, and who equate doing so with perpetuating their own oppression.

That said, I strongly believe that Bernie Sanders' record of advocating for the working class, voicing the unpopular opinion, and remaining true to his moral and political ideals offers a glimmer of hope for the future of this country. I have no illusions that as President, Bernie Sanders will be able to accomplish much of what he is campaigning for, particularly if the House and the Senate remain Republican. But unlike Hillary Clinton, he will try. He is a man of honesty and integrity, a breed of politician that comes along rarely.

Further, the notion that Bernie Sanders is an out of touch idealist who lacks the ability to get anything done is unfair and untrue. According to the New York Times, over one 12-year stretch in the House, Sanders passed more amendments by roll call vote than any other member of the Congress. Loyal to the people rather than to a political party, Sanders has formed unlikely coalitions with Democrats and Republicans alike to append important provisions to larger bills. With Republican Senator Charles E. Grassley, Sanders successfully prevented foreign workers from replacing Americans at banks that have had a federal bailout, and joined together with Arizona Senator John McCain to work out an accord on a bill to expand veterans' access to health care. Sanders is also responsible for the Obamacare amendment that expanded community health care clinic funding by $11 billion.

In a system as corrupt as ours, of course there are limits on what Bernie Sanders, or any one person, can accomplish as President. But it is necessary to also consider what he will not do as President. He will not start trillion dollar wars in the Middle East with incalculable human casualties, nor will he support immigration policies that break up families and destroy lives. For the first time in modern history, our President would be completely autonomous from corporate America and special interest lobbyists. Hillary Clinton has proved time and time again that she will do whatever it takes to win. But whose team is she playing on? How many of our morals must we sacrifice in order to stand behind her? And how many women in the United States and overseas must be trampled upon on Hillary's quest to make feminist history?