Unless you've been living under a rock, you're probably aware of the fact that Caitlyn Jenner was recently honored with a Woman of the Year award from Glamour magazine. Unsurprisingly, the honor was greeted with controversy and an onslaught of both blatant and concealed transphobia.

Let's disregard the outright transphobic and bigoted remarks many have hurled in response, because they are clearly ignorant, hateful and honestly not worthy of rebuttal. Instead, let's focus on what's more concerning -- those who claim to be "progressive," yet, are simply disguising their transphobia behind a façade of pretending to give a single fuck about who was honored with a Glamour award.

Many of the criticisms regarding Caitlyn being honored with a Woman of the Year award revolve around the idea that there was someone more deserving, perhaps someone with more integrity or heroism. The people making such remarks claim to not care about the fact that Caitlyn is transgender, rather that they just think it should have gone to someone other than her.

First of all, let's be clear that Caitlyn Jenner did not win "the" Woman of the Year award, in fact, she was one of dozens of honorees this year with a variety of achievements and backgrounds. In the 25 years Glamour has given the awards, Caitlyn joins a list of 397 previous honorees.

It seems that most of those criticizing her receiving the honor likely have never heard of the Glamour awards, or cared, until Caitlyn joined the list. This is apparent and obvious, considering that many feel the honor should have been granted to someone more worthy. Unless, by someone more worthy, they mean people like Britney Spears, Christina Aguilera, Gwen Stefani, Victoria Beckham, Beyonce, Lily Allen, Lady Gaga, Taylor Swift or even Kim Kardashian -- all of whom have received a Woman of the Year award by Glamour without controversy or care. 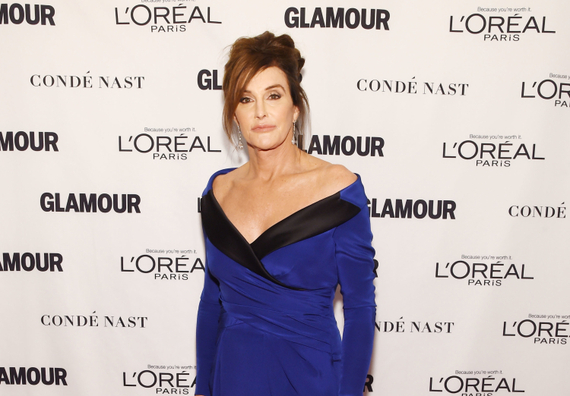 The only difference between other celebrity recipients of the award and Caitlyn is that they were all cis-gender (except for Laverne Cox, who was honored in 2014, making Cailtyn the second trans recipient). Let's be honest, people aren't concerned with who actually deserved the honor, they are clearly outraged by the fact that a trans woman grabbed the spotlight.

Glamour also chooses a Man of the Year, but we don't see anyone suggesting that Caitlyn should have been granted with that. No, because these people are "progressive" and have to ensure that they keep their transphobia obscure and under wraps. So, instead of overtly admitting they don't respect trans women, they have to hide behind some other seemingly legitimate attack against Caitlyn, such as making reference to her remark about clothing being the hardest part of living as a woman, which was clearly a joke -- a witty, tongue-in-cheek statement that was taken completely out of context.

In all honesty, just stop pretending that you care who was added to the enormous list of Glamour Women of the Year honorees list and just come out and admit that you have a problem with trans women. The first step to recovery is admission, so go ahead, let it out. Accept that you are transphobic, bigoted and wrong. Perhaps take a moment to learn about being trans, or better yet, speak to some trans folks to gain a more cultured perspective and become a more tolerant, less hateful and ignorant person.

Trans people aren't going away, nor should they be forced to continue to avoid the spotlight in order to escape bigotry and hate from people like you. Caitlyn has shown tremendous courage and integrity and continues to use her spotlight to highlight serious issues facing the trans community in effort to make the future brighter for trans people across this country and around the world.

Maybe instead of condemning her and criticizing the honor she received, you should really dig deep and consider why you are so offended by her. Perhaps you can start by thinking about how you would explain to a trans youth why you don't feel Caitlyn is worthy of the honor she received. No, it's not because you think there was someone else who should have been awarded, it's because you have a deep-seated issue with trans people and that's your problem, not theirs.

Watch this on The Scene.
Download
Calling all HuffPost superfans!
Sign up for membership to become a founding member and help shape HuffPost's next chapter
Join HuffPost