PHOENIX -- The conventional wisdom in presidential politics is that presidential candidates win their home states. In Arizona one would expect every corner to look like a jubilee celebration in honor of John McCain. It's a hot election season, which means many street corners are festooned with red and blue campaign signs, lined up like colorful sheets drying in the Arizona sun. Surprisingly, though, McCain's name is absent from most corner festivities.

Even more surprising, volunteers are scant at McCain's Phoenix headquarters and other GOP offices throughout the state. The McCain campaign has a national website presence, but lacks a cadre of helpful and informed local volunteers -- people who answer for their candidate when he's away. Are these indicators that the McCain campaign is complacent in Arizona, or are Arizonans that blase about McCain's candidacy? The campaign did not return phone calls, so it's hard to know. In fact calls to Republican McCain offices around the state often go unanswered.

This is McCain's backyard, so where are his supporters?

Phoenix conservatives have long heaped scorn onto McCain, primarily for his stance on immigration and other core conservative issues. When it came time to run for president, though, he changed tack on immigration, as well as many other issues. He showed contrition by stating that he had "learned his lesson" on immigration and promised to support border control measures "before amnesty." It is doubtful, though, that McCain has actually convinced Arizona conservatives. In 2007 conservatives and moderates battled for control of the party, but McCain's hand-picked candidate lost the election for state party chair. Perhaps this is why there is no noticeable groundswell of volunteers backing him even on his "home" turf.

Arizona GOP Executive Director, Sean McCaffrey said that the state party spent a hefty sum of money putting in phone systems and building a call center in the Phoenix GOP headquarters. The technology that the Arizona GOP is using is expensive, but it is also old school. Arizona Republicans are relying heavily on expensive automated telephone systems (robocalls), while Democrats have an army of volunteers armed to the teeth with laptops and cell phones.

In September, when the Barack Obama campaign opened its main office in the heart of downtown Phoenix, an estimated 1,000 cheering volunteers showed up. Arizona's Obama for America Communications Director, Dave Cieslak, says,

If enthusiasm is a measure, it shows a deep and thorough level of support. It's stunning! Offices are filled daily with volunteers -- answering questions, getting ready for community events. Phoenix volunteers have taken on an incredible amount of work, as well as working full time jobs.

A study in contrasts, Obama's packed Phoenix office is located in the heart of Phoenix's inner city, homemade posters taped to the security bars that wrap around the entire porch of the old home; McCain's posh office is housed in the same upscale office building as are his stately local Senate offices, the headquarters filled with expensive equipment but nothing like the kind of massive volunteer support this election season has turned up around the country on the Democratic side. A glistening sign on the side of the busy thoroughfare advertises the presence of the headquarters. 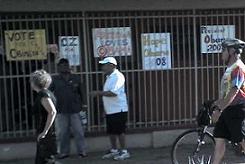 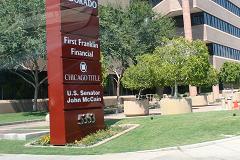 Obama volunteer Mike Leyva says that 200-300 people flood into Obama's modest campaign office every day to donate, volunteer, or buy yard signs, bumper stickers, buttons, and tee shirts. He says he has worked on other campaigns but that this campaign is different:

People are bringing in one dollar contributions with apologies that it can't be more. I've never seen anything like it.

His voice swelled with emotion as he told the story of a woman who was unable to find a parking spot at the downtown office. She creatively maneuvered her car so that she could quickly run into the Obama office to buy some Obama gear. When she came out, a parking officer was writing a parking ticket. Though several witnesses tried to intervene on her behalf, begging the officer not to give her the ticket, the woman simply held out her hand with a smile, took the ticket, and said that it is a small price to pay to help Obama get elected.

Leyva is inspired by the difference he sees between the Obama campaign and the McCain campaign,

I've never experienced such a friendly environment of multi-cultural, multi-generational energy and enthusiasm for politics. The parking lot is always full. Everyone brings their cell phones and laptops. The young people are all high energy Facebook users. I've worked campaigns before and this is the first time I've ever seen people so engaged and knowledgeable about the issues .... Even my 77 year-old mother is involved. We have Native Americans for Obama with tribal leaders speaking out. The other day we held a press conference for Republicans for Obama.

On the first visit to the McCain campaign's Arizona headquarters, the office was nearly empty. Three people worked quietly at desks. On the next visit, the office again had only a few people but was filled with a surplus of unused yard signs. 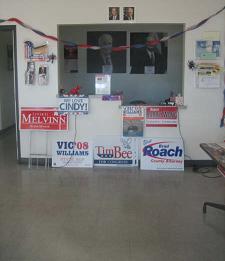 The contrast is striking. The McCain campaign office is devoid of people, but its walls are lined with stacks of unsold yard signs. Meanwhile, the Obama office is filled with volunteers, but signs fly out of the door almost as fast as they arrive. Obama's Phoenix office was able to fill their waiting list for yard signs and had some leftover stock. Cieslak says, though, that the signs are a high-demand item. They are selling them for $8 on a "first come, first serve basis," and they expect them to be gone by the time this article is published.

This pattern is true throughout the state. Although Tucson is a blue dot in a sea of Arizona red, we expected the McCain office to be full of home state volunteers working for Arizona's favorite son, but the McCain office in Tucson has also been empty.

The Tucson Democratic office, on the other hand, is filled with bustling volunteers chatting on the phone with voters, inputting data, making coffee and snacks in the kitchen area, and organizing campaign literature in the back of the office. The phone rings non-stop. Because the office is located on a busy corner, there is also a constant stream of walk-in visitors purchasing campaign materials or volunteering for the campaign.

Like other Obama offices across the country, the demand for signs, stickers and shirts has been so high in Tucson, it's difficult to keep an ample stock of supplies. They were able to clear their most recent waiting list for Obama yard signs and other materials, and they even had a few yard signs left. However, they are already out of bumper stickers again, and the yard signs won't last long (they may already be gone). They were undecided whether to start a new waiting list because Obama materials are in such high demand across the country that they don't know whether they'll be able to get more Obama materials before November 4.

Trying to slow down volunteers in the Tucson Obama office long enough to get an interview is like trying to catch the wind. The office is open and running no later than 9:00 AM every morning, and the morning crew is busy preparing for volunteers who begin streaming into the office by 10:00 AM. The lady at the front desk is continuously greeting walk-in visitors and answering a phone that never seems to stop ringing. Volunteers bustle around the kitchen, handing bottled water and food plates to volunteers in each calling station. Data entry volunteers focus intently on their computer screens, inputting calling and canvassing results - Obama volunteers across the country have been told over and over that it is the accuracy of the databases that allows the campaign to target voters with the precision necessary to get out the vote effectively. Other volunteers fastidiously organize campaign literature for canvassers who will soon be doing neighborhood walks. 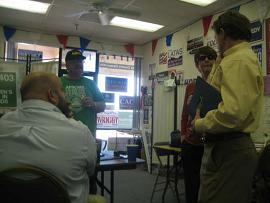 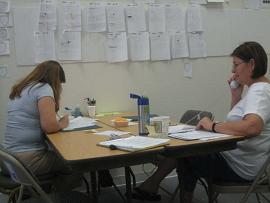 One wall flutters with volunteer sign-up sheets; a quick glance reveals that most office shifts are full to capacity, along with lengthy lists of volunteers ready to canvas local neighborhoods. The office is virtually wallpapered with Obama posters, information on other downticket candidates, sign-up sheets, upbeat slogans, campaign literature, political cartoons and newspaper articles. It's colorful and high energy.

Thirteen miles away, the Tucson Republican office is tucked in a strip mall off of a residential street near the Sun City retirement community. The inside reflects its languid surroundings. The office is pristine: Everything is orderly, neat, tidy and controlled. The office is rarely open. Walls are virtually devoid of decoration, except for the usual district map, posters of John McCain and the you-couldn't-possibly-miss-them color photos of George W. Bush and Dick Cheney. We were assured that there are lots of volunteers, but the sterility of the environment underscores its inactivity. The office is completely devoid of the usual disorder and debris usually left behind by an office full of volunteers. There's not even a stray piece of paper. 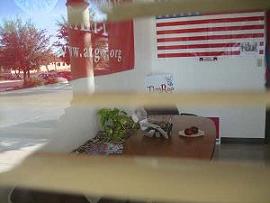 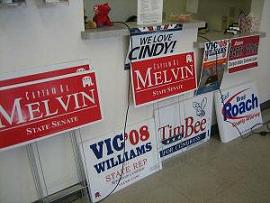 While the Tucson Democratic office can't keep anything with a Democrat's name on it in stock, the Republican office does not seem to have a similar problem. In the entry room of the Tucson Republican office, one wall was covered with yard signs, stacked five to ten deep, waiting for homes. Yard signs for every downticket Republican candidate were there for the taking, including John McCain signs. There was even a "We Love Cindy" sign in the stack, gathering dust.

At the Tucson Democratic office, one gentleman walked in and asked to buy an Obama yard sign. He insisted on paying $100 for it, saying he wanted to make a public statement AND a donation.

An hour and a half north of Phoenix is the original capital of Arizona -- the quaint town of Prescott. Prescott's colorful and scrappy "Whiskey Row" belies a very red, highly conservative population. Surely the McCain backers should be livelier here. Nevertheless, the same marked contrast exists between the Obama and McCain offices. The Obama headquarters is stocked with friendly and enthusiastic volunteers making phone calls, mailing out stickers, checking organizational lists to make sure that no one is overlooked. A five-minute walk away, the McCain office seems to be perpetually closed.

McCain's vacation home is situated in the beautiful and unique red rock country town of Sedona. This is where Sarah Palin received her infamous creek side schooling before the vice presidential debate. This town of 11,000 is a prime tourist destination, and from all appearances, Obama voters outnumber those loyal to their not-quite-native son. Neither candidate has a store-front office in Sedona.

Thirty miles north, the Coconino County Democratic Party with its responsive and helpful staff serves the city of Flagstaff, a major college town and gateway to the Grand Canyon. The Flagstaff Republican Women opened a temporary office in late September on behalf of the McCain campaign, which they said they will man every day until the election. 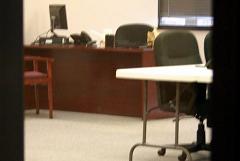 When juxtaposed with Obama's bustling offices, McCain's empty Arizona offices are reminiscent of the ghost towns for which Arizona is famous. Although McCain is expected to win his home state, it is clear that the state is trending bluer than it once was.