There is a Third World nation of 45 million inside the United States -- the population of Kenya -- who live in poverty without adequate health, education, housing, and social benefits.

Despite this, candidate Bernie Sanders has found it difficult to gain traction for his anti-poverty policies in the Democratic primary in states where income inequality is highest. The recent exception is West Virginia where he won a resounding victory.

America's impoverished grows. There is no trickle-down benefit for them, due to many reasons, but voting absence represents yet another obstacle. Sanders during his primary campaign has pointed out that poor people don't vote and points to the fact that (until West Virginia) he has lost his primary bid in 16 of the most unequal states in the union.

"That's a sad reality of American society and that's what we have to transform... in America today, the last election in 2014, 80 percent of poor people did not vote," he said on the campaign trail.

Politifact said exactly 75 percent of the poor didn't vote in the 2014 mid-term elections. 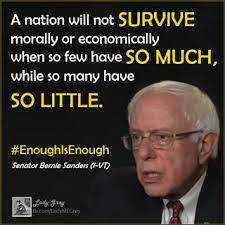 The census showed that 11 million black Americans live below the poverty line, or 27.2 percent compared with 24.3 percent before the recession began. The Hispanic poverty rate was 23.5 percent.

The sheer volume of people living badly, in addition to their continuing deterioration, is evidence of that America's much-vaunted "trickle down" system is actually a "trickle up" system benefitting the high-income earners.

The poor in America suffer from a democratic deficit and a catch-22. They are ignored because they do not storm the ballot box and they do not storm the ballot box because the system is stacked against them. Instead, their incomes have eroded along with the attacks by Republicans on the social safety net such as cuts to food stamp programs and extended unemployment benefits.

And their franchise rights, to vote, have also been steadily eroded due to needless registration rules and complications, voter ID costs that they cannot afford, transportation or babysitting costs to vote or register and disenfranchisement of felons, immigrants and residents of Washington D.C. and U.S. territories.

Poor people live from paycheck to paycheck and do not have the time or money to engage in the political process by running for office, helping those who do or even going door to door to canvas on behalf of their causes.

According to the OECD figures in 2012, the United States has poverty rates of 17.9 percent rivalling Mexico or Turkey among the 28 countries and double those in Britain, New Zealand, Poland or Germany.

The disconnect between the income inequality candidate and income deprived regions is obvious. For instance, these groups would benefit the most from Bernie Sanders' $15 an hour minimum wage, and yet Hillary Clinton's less generous minimum wage of up to $12 an hour has won votes from the poor who vote.

Sanders' diagnosis is in fact correct, and depressing. He is the conscience of America and his message is being heeded and should be.

The United States prides itself on being a land of opportunity but has become a nation-state equivalent of the famous Irish saying that many of us grew up with: "The rich get richer and the poor get children."