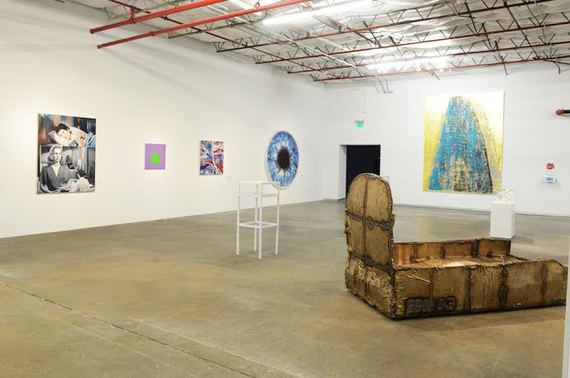 Last weekend Simon De Pury banged the gavel on dinner tables and occasionally the concrete floor of Dallas Contemporary, to support not only the museums' ever fresh programming, but MTV REDEFINE. Its Staying Alive Foundation is a highly respected organization which gives grants to young people to creatively and proactively educate potential victims of HIV & AIDS globally. These two dynamite, and not so divergent entities split the 2.5 million dollar pot of gold gleaned from the auction to make more art and altruistic magic happen.

It takes a lot of effort to create an event that celebrates achievements and showcases valuable art, all of which was generously donated by artists, for the purpose of benefiting causes which make a difference between life and death, as well as the out-put of artistic expression. That means a lot of forces have to come together to make it all work harmoniously. An outstanding curator, a magician auctioneer, generous philanthropists, conscientious board members, delicious caterers, determined PR, selfless volunteers, and passionate foundation heads.

And so all the stars were aligned for this benefit to be what it needed to be...Fruitful.

Dallas Contemporary is a big, beautiful loft like open space. When I arrived they were setting up the art and the bubbly as art enthusiasts were previewing the work. The most prominent pieces were percolating for spectators upon entering the space, which housed a good portion of 92 artworks sent for auction.

Sterling Ruby's "Trough" was the first thing that caught my attention. I asked Executive Director, Peter Doroshenko about the piece, which looked like a headstone with a raised bed for a cemetery plot. He explained that "it's a replica of a steel factory spigot and bath which catches all the leftovers when the metal is being poured. It's meant to be ambiguous...Could be a bed or coffin." Nice work Mr. Ruby! That's the way I feel after a day when the New York City subway shuts down with no further information...Will I wake up tomorrow, after I finally make it home on foot in the snow? "A table is a table but a "trough" has multiple personas."

Then there was the eccentric and thoroughly retro McDermott & McGough which was an excellently painted dual portrait, "You Said Your Lips," scenes from 1940s & 1950s films. Mr. Doroshenko told me that "the painters are fascinated by time and location. For the first 20 years of their careers, they dressed in 1890's garb and used a horse drawn carriage." I plan on tracking them down in my model T Ford and writing about them on my typewriter, since they have captivated my imagination. Not far away was Damien Hirst's painting called "Pink Elephant," which I found nostalgic, since it reminded me of the paint splatter vector player I used as a child at a fair. I could splatter the paint on a wheel which spun speedily, consequently I would have a painting to take home and set beside my lava lamp.

Of course the highlight of the evening was Enoc Perez's very impressive blue and gold "Lipstick Building." He chose gold as a back drop because Phillip Johnson used gold or brass for metal accents in his buildings. This is one of 6 paintings in his series and it was made to fit perfectly in the glass house gallery of the Johnson construction in Connecticut. Mr. Perez is a very modest man and was extremely pleased to be part of the auction and grateful to be the evening's honoree for MTV: REDEFINE, highlighting his seminal work in architectural painting. He will also have a show at Dallas Contemporary in September 2017. Talking with Mr. Perez was particularly touching, as his absolutely genuine and candid life experience as an artist shown through when he said, "I paint because that is what I do, but to paint and be recognized for it and paid is wonderful. Most artists get residencies or scholarships...I feel like I've gone a little Hollywood." 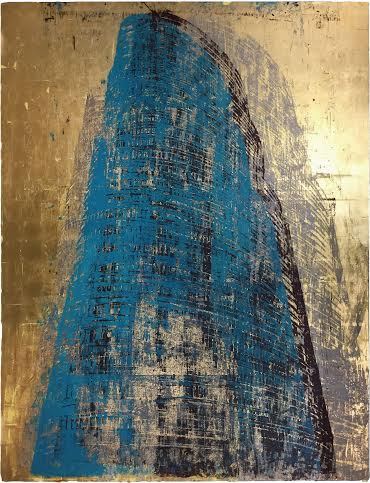 After perusing the entire gallery, it was time for the auction to begin. Joyce & Kenny Goss introduced the evening and gave awards to Mr. Perez and the Headington Corporation for their philanthropic work. The best was yet to come...The most memorable parts of the evening was watching the exceedingly charismatic, high energy and determined Simon De Pury do his abracadabra on people; getting them to bid up higher, even when no one was bidding against them. He cajoled, charmed, and delighted his audience of spectators. He gently scolded into is microphone "shh, shh, shh," between announcing each work on display and started the bidding out low to reach the crescendo highs he was challenging them to. "Madame," he called out to one lovely woman who purchased the "Lipstick Building" painting, "You are not only beautiful, you are the luckiest person in the room to have such a painting!" Another time a spectator laughingly blurted out, "This is illegal," referring to Mr. De Pury's expertise at getting people to bid higher. "Sir, no, not illegal, I want you to be desperate!" He knew so many of the guests personally that he was able to joke with them fondly. He told one gentlemen that "Since he had just gotten a new job, why not place a bid?!" 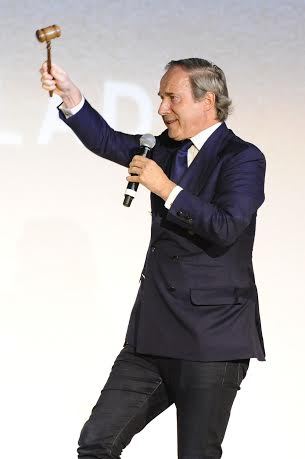 At one point he called up Georgia Arnold, the executive director for Staying Alive and said in his perfectly luxurious French accent...

Running up to the stage, she shouted back, "It pays for 5 HIV sensitization meetings for 75 young marginalized deaf people in Uganda."

$10,000, he shouted. "One girls-led HIV awareness project in India for 1 year, educating more than 10,000 school girls about safe sex, condom negotiation and self-confidence." She called back.