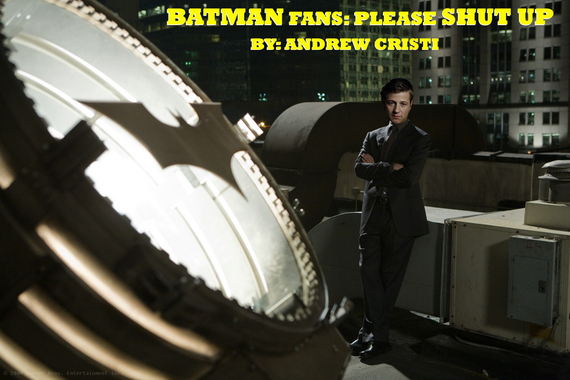 You ever walk into a bar where a local band is playing and have to unfortunately sit through their set of original songs? You suffer, you cry, you can't hear your friends. You DRINK. Then, something wonderful happens- they play "Mr. Jones," by The Counting Crows. You notice how the crowd goes wild? There's a reason for that.

"Mr. Jones" is a classic. People love classics. People aren't mad at the local band for playing the hit. In fact? They are grateful that they finally played something they are all familiar with.

Every single time I hear someone complain that an updated reboot of something or new artistic interpretation will "ruin" the original, I feel like sentencing them to a lifetime in hell where a local band is playing only their original songs.

Thanks to the day and age of social media, everyone is a critic who apparently knows what they are talking about. IMDB, Facebook, Twitter, etc. has shown that opinions are like assholes- everyone has one, and...

...Most people are assholes.

But, nothing proves to be a bigger catalyst for social media criticism than any reinterpretation of art. And I'm not talking true art. After all, William Shakespeare's "Romeo and Juliet" went virtually unnoticed in theaters last year and painter Peter Max's re-stylized "Starry, Starry Night" by Van Gogh was practically unheard of. But, the new "ROBOCOP" or Michael Bay taking over the "TEENAGE MUTANT NINJA TURTLES" franchise? Well, America is PETRIFIED that "artists" will "RUIN" these CLASSICS.

As far as America is concerned, Shakespeare you can toy with, but leave our 80's cartoons alone! There is no way that any movie studio can possibly understand turtles that gain super powers from sewer slime.

Not one reinterpretation of any form of art, be it a song cover, a film, a television show, a novel, etc, cannot be met by millions of angry fans over the internet about how it will be destroyed. Fans set everything up to fail.

I read somewhere that fans were so upset about the color of the cat in "The Hunger Games" films that they had to replace the cat so that fans would just shut up already. Can you imagine how many problems everyone would have with the Dolph Lundgren version of "Masters of The Universe" from the 80's if it came out today? But, instead, everyone considers that a classic!

As ridiculous as all the complaints can be from "Harry Potter" fans, and Marvel fans, and "Fifty Shades of Grey" fans and even "Star Wars" fans...there is something super-special about the levels of stupidity in a "Batman" fan. Maybe it's because everyone thinks they are a Batman fan? Maybe it's because the premature, James Dean-esque death of Heath Ledger destroyed film-making forever and made millennials truly believe that his performance in "The Dark Knight" was a tour de force that they can pat themselves on the back for seeing and praise their own intelligence, since it's overrated appeal went through the roof. (Is there anything worse or more pretentious than a Batman fan that addresses the director as "Nolan" and says he can "do no wrong?" Nope. Nothing in life.)

Batman fans have reached a ridiculous point where they think that anything featuring Batman is the next "Schindler's List." They expect it to be gritty, dark and super-serious. They strongly believe that the Batman franchise should not have any fantasy elements, what-so-ever. They are against unrealistic costumes, unrealistic fighting, and anything that doesn't state "real crime drama."

Okay, let's go over what Batman is all about, shall we? It is about a man who dresses up as a bat, creates a nickname for himself and fights a city full of super-villains, also in costume and also equipped with playful aliases. "Schindler's List," it ain't. It's genre is not "Crime Drama," it's "Crime Drama FANTASY." And anyone who refuses to accept the fantastical elements are the ones most living in a fantasy world.

"I just think it's kind of funny. You know, he's not playing King Lear. It's Batman! [That's] certainly within his skill set. If anybody saw 'Argo' or 'The Town,' and all the work he's been doing lately, it's way more nuanced and interesting and way more difficult than Batman! Batman just sits there with his cowl over his head and whispers in a kinda gruff voice at people."

And I'm sure Ben Affleck will receive the same cycle of social media hate that Carrie Underwood and every other star receives in a blockbuster role- strong hate, softened by the worlds sympathy, resurrected by hate, all showing how simpleminded the followers of the world can be.

And now, as if there weren't enough whiners in the Batman faniverse, FOX has announced a new show called "Gotham" starring "The O.C.'s" Ben McKenzie slated for the 2014 fall TV line up. "Gotham" will apparently be a prequel to Batman's days fighting crime and center on Commissioner Gordon (Mackenzie) keeping the streets of Gotham City safe from familiar criminals in their beginning days.

Basically, FOX is looking to do what THE CW has successfully done with male and female audiences alike with "Smallville" and "Arrow", and even NBC's "Agents Of Shield," by trying to tell an origin-superhero story. From a marketing perspective, with the popularity of the franchise and the lacking of it currently on television, it's actually a smart move.

As expected, fans have already started crying about the show before it even went into production. From back-stories to characters names to casting, none of the internet's little wannabe "casting directors", "directors" or "writers" are happy.

Yeah, I thought so.

Cry as they might (Oh, and they will,) a true Batman fan will tune in. And there are so many that it's hard to not take the risk on this kind of show. As much as they will be their own worst enemies and they will try and kill it week after week, they will keep watching. Then, years later, they will buy the boxed blue-ray set, a la "Birds Of Prey" (another blink-if-you-missed-it Batman origin story set around Batgirl, The Huntress and Black Canary) and reminisce.

Point is- just like "Mr. Jones" coming on in the bar, even if the local band croons it out of tune, fans of the song are still grateful to hear it. As much as it hurts to see a poor interpretation of our favorite works, we would rather see them told time and time again, then forgotten.

I have recently become shocked at how many people in my own and the generation after mine have never heard of "Rebel Without A Cause." I find it atrocious that they have been deprived of this timeless classic that will forever be relevant when it comes to dealing with teen angst and loneliness. If the movie were to be remade today, I'm sure it would be met with nothing but criticism and backlash. Fans will jump to say it's being "ruined" and studios should leave it alone. Same with "Breakfast at Tiffany's." But... that's what Truman Capote thought with his original novel.

You see, so many people forget that "Breakfast At Tiffany's" was a novel first (and much better at that), since it is now immortalized by the Audrey Hepburn film version. But, do I think Hepburn's Holly Golightly and Co. lack all charm? Of course not. It's a stamp in American history. It is culturally significant and iconic of so much about that time.

Not that I don't understand Capote's gripe. As a writer who has poured my heart out into my own memoirs, "The Peter Pandrew Trilogy," only one thing would destroy me more than seeing my messages lost and my work watered down to be popularized for the public in some re-imagination that isn't my own- and that is...

...If it was completely forgotten.

So many works of art in all mediums come out and never make a blip on the worlds radar. Of course I don't want my words and feelings and the focus of my story to be lost as someone steals it and spins it, but I also don't want it to fade from existence. I worked so hard to make a coming of age story that would be forever relevant for everyone, and I would love for it to touch people and have them want to keep breathing life into it creatively. After all, my story comes from one grand allusion to J.M. Barries "Peter Pan." And my metaphors, allusions and references don't end there -- I constantly pull from great and inspiring works such as "Rebel Without a Cause," "East Of Eden," "Les Liaison's Dangereuses," and even The Bible.

And deep down, nobody wants it to. At the end of the day, producers are damned if they do and damned if they don't. Fans have been crying forever for a "Thundercats" movie (myself included. Thundercats, Ho!) and if it were to ever get made, all it would be met with would be complaints and those same fans trying to kill it. I mean- we all hope they are smart enough to know Vin Diesel would make the perfect Panthro, but if he's not available, I guess we will just have to take whatever actor they envision is right for the role and realize... it's just not that serious.

And furthermore, I think I should admit that my favorite superhero of all time is Robin. I, myself, am a Batman fan- and a pretty big one at that. I even know who Renee Montoya is. And I love the most hated character of The D.C. universe. I know this information will be met by cries of obsessive Batman fans stating how moronic I am and how I can't possibly know what I'm talking about. But, if it were up to me?

I would tell FOX to scrap "Gotham," and instead put a show call "Arkham" on FX. The show would be about psychiatrist Jeremiah Arkham, played by either Hugh Laurie or Bryan Cranston. It would deal with his back-story as he dealt with the rest of the staff and patients at the asylum he ran, Arkham Asylum, notably Dr. Harleen Quinzel (played by either Christina Ricci or Shameless' Laura Slade Wiggin's) and the hostile patient she falls for... 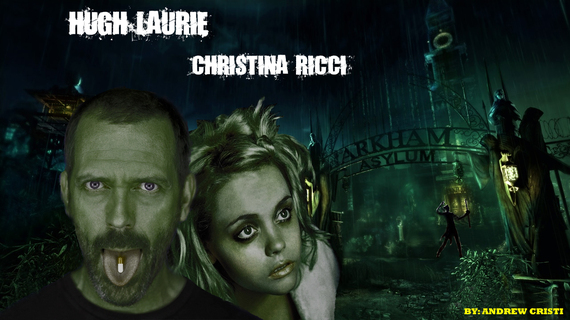 But, I'm willing to accept the fact that "Gotham" is coming into existence. And even if I did just think of a better idea, or an idea that at least I like better, I can accept another artists vision.

Because in the end I know I'd rather hear my favorite "Mr. Jones" sung out of tune than have to suffer through an even worse original.

ANDREW CRISTI
THE PETER PANDREW TRILOGY- available on Amazon and Barnes and Noble
http://www.amazon.com/dp/B00A7BIVVW
@andrewcristipeterpandrew on instagram
@andrewcristi on twitter