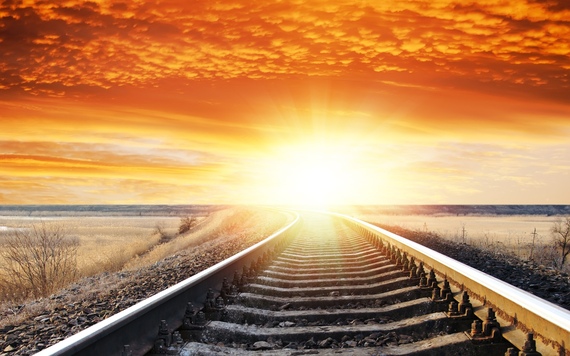 I took the focus-on-the-interior road -- more or less. I have lived in Northern California for 25 years. The son of Polish immigrants, I dashed away from home at 18, attended the Walter Cronkite School of Journalism at Arizona State University and had big dreams of taking over Paramount Pictures. I wound up shlepping coffee in Carmel. Not a bad thing. Good writing material. And, actually, a fantastic opportunity to begin exploring more deeply the inner workings of the soul, the mind, the psyche and whatever else was wandering around inside, blatantly left unattended.

(Non "woo-woos" reading this, hang tight: Joseph Stalin is about to enter the picture and goodness, don't we love some drama?)

Over time, I became an editor of a prominent weekly magazine, I wrote for national outlets, I spun around the celebrity roulette wheel. l interviewed the likes of Joan Rivers, Cyndi Lauper, Chris Pine, Ewan McGregor and countless others. All fun. But I always found myself asking these icons: "What is the most interesting thing you've been learning about yourself lately?"

I wanted to hear answers with some depth. Often, I did.

As the years progressed, so did my spiritual leanings. I Deepak'd, Oprah'd and Tony Robbins'd myself among the best of them. I prayed, chanted on mountaintops, OM'd, yoga'd and picked more spiritual lint out of my celestial navel than I can properly assess. Some could easily call me a California cliche -- that blond dude carrying a yoga mat who, when asked, 'how are you doing today?" responded with: "Evolving, thanks. And you?"

Well, what else was a soul-searching blond, Polish son of immigrants who survived World War II left to do?

Through a series of serendipitous events, I was led to explore more deeply my Polish mother's survival story. The ancestry bug bit me -- big time. Growing up I always heard tales from my Polish aunt and uncles about the misadventures the family experienced during the 1940s. It took nearly 30 years for me to investigate further, the result of which found its way into my latest book, Grace Revealed: Memoir, which chronicles my journey uncovering my Polish family's journey surviving Stalin's mass deportation of Polish people during the 1940s and the ripple effects that remain.

However, the route to truly understanding what my family endured, as well as the nearly 2 million Polish people who were deported to Siberian slave labor by Stalin, was complex. Mood swings happened. I much preferred binge eating or reading gossip magazines. I had become an entertainment journalist, after all. I was supposed to care more about the Oscar race, the Emmys, the Kardashians.

Stalin? Not so much.

I found myself back in the therapist's couch, wondering why there wasn't a more playful or creative place to park your ass when you think you're going crazy. It's always a couch. Why not a swing? If you're going to mood swing, then why not do it in front of somebody who can help you. And on something that gives you movement.

My rail-thin, lesbian Buddhist encouraged me to look deeper; investigate the backstory of the plight of the Polish deportations, an odyssey that had, at that point -- several years ago -- still been grossly under-reported.

"And then what?" I asked my therapist. "What do I do with the information I find."

What? Did she want me to become the Pied Piper of the Poles' forgotten odyssey?

Well, delving into my family's ancestry and the events that befell them and nearly 2 million of their comrades, did create a shift. I chronicle all of it in the book, but in short,

Out: Bingeing on Ben n' Jerry.

In: Bingeing on Stalin.

My mammoth serving of Bad Things Happened When Stalin Sent My Polish Family To A Labor Camp was illuminating -- to say the least. When in 1938, Stalin had seen himself on the other side of The Great Purge -- the Soviet Union leader's infamous campaign of political repression (1934- 1940) to brutally dismantle the Communist Party and government officials, repress peasants and other atrocities -- he helped fuel another dramatic event that shattered lives: the signing of The Molotov-Ribbentrop Pact.

Soviet foreign minister Vyacheslav Molotov and Germany's foreign minister Joachim von Ribbentrop crafted and signed the accord, which became the official Treaty of Non-Aggression between Germany and the Soviet Union. Also known as the Nazi-Soviet Pact, the documents were signed in Moscow on August 23, 1939. This agreement allowed Hitler to invade Poland at will. But only one week after the Soviets rampaged areas in the Far East in The Battles of Khalkhin Gol (or the Nomonhan Incident), which saw the fall of The Japanese Sixth Army. The best part of the agreement, at least for Germany and Russia, was the stipulation that Nazi Germany would not engage in combat with the USSR, which gave the USSR temporary non-involvement in the mounting European war. The agreement also prevented Germany from forming any kind of military alliance with Japan.

On September 16, 1939, when Russia declared victory in the Nomonhan Incident, Stalin ordered Soviet forces to invade Poland on September 17.

Earlier that year, in the spring, my Polish family -- grandfather, grandmother and 7 aunts and uncles, including my mother -- had settled into their farmhouse in bucolic Liczkowce (today known as Lychkivtsi in Ukraine), approximately seventy kilometers southeast of Tarnopol (now Ternopil), which rests 125 kilometers southeast of Lwów. The region was officially part of the recognized Second Polish Republic (1918-1939), which rose from the border-shifting ashes of World War I (1914-1918) and the Polish-Soviet War (1919-1921).

However, these reorganized Polish boundaries along Ukraine in the east were plagued with a questionable inheritance. Political unrest was rampant at the time. However few Polish families in the area could have predicted the full extent of Stalin's wrath. Like a dragon descending over a medieval village, Stalin's invasion of Poland turned into a bona fide reign of terror, followed by Sovietization. Stalin's strategy was to occupy the Eastern Borderlands (today western Ukraine, western Belarus and eastern Lithuania), also referred to as The Kresy, with a population of more than 13 million people that included Belorussians, Czechs, Jews, Poles, Ukrainians and other citizens. Sovietization had one purpose: To liquidate the entire Polish state. The mass arrests of civil leaders, priests, policeman and judges began almost immediately -- on September 18, 1939 -- and continued until June 1941. In all, approximately 200,000 Polish POWs were captured by the Soviets. The majority of them, like my family and other Polish citizens, were sent to the Gulags.

By this time, Lavrentiy Beria had become head of the NKVD. A well-known political official at the time, Beria succeeded Yezhov as NKVD head in late 1938 and Yezhov was blamed for, among other things, the economic ramifications spawned by The Great Purge. Yezhov would meet his fate in 1940, when orders were given for his execution. It was common at the time for Stalin and the government to swiftly change course and condemn former officials for circumstances they themselves set in motion. Yezhov's execution was par for the course.

In the meantime, Beria, somebody we have not heard much about in the history books, took the political baton that was handed to him and oversaw the execution of thousands of prisoners. He did more than become part of Stalin's elite inner circle. He crawled into the strategic bed with the man and produced a sinister offspring: The mass deportation of Polish citizens.

Under Beria's supervision, the first of several grand-scale deportations of Polish citizens took place on February 10, 1940, a day of infamy that will be forever engrained in Poland's history and my family's psychological makeup. More than 100 trains, each carrying an estimated 1,000 to 2,000 Poles, transported nearly 220,000 souls -- military veterans, settlers, foresters and farmers -- into the glacial abyss of Siberian slave labor.

Several months later, on April 13, 1940, 320,000 Polish individuals -- so-called "family system of enemies," mostly women and children -- were also removed from their homes and forcibly resettled in Kazakhstan. In the summer of that year, another 240,000 Poles were deported from Polish territories occupied by the Germans. A fourth round of deportations, this time in the Lithuanian Soviet Socialist Republic, took place in June 1941. Those people were sent to POW camps or the Gulags, adding another 200,000 souls to the deportation tally.

The estimated total number of Polish people deported: between one and two million.
The slave labor camps were scattered throughout Russia: Archangel, Vologda, Smolensk and Moscow in the north; Krasnoyarsk, Tomsk, Omsk in the east; and Bernaul, Karaganda and Novosibirsk in the south, among others.

At the time, the USSR covered more than 17 million square kilometers (nearly 6.5 million square miles). Tallying the long list of those penitentiaries is not a simple feat. Back in the 1940s, Stalin and his henchmen had already established camps for "criminals and military prisoners," as well as women's and children's camps and countless others. The majority of them housed Stalin's own countrymen.

I was on a creative if not mindbending roll. What else could I uncover?

My probe also led me to Magdalena Maciejowska's thesis, "Deportation of Polish People," penned at the Jagiellonian University in Kraków in 2002. The author reports that Stalin had already been sending his own people to these concentration camps "en-masse since 1929." Stalin, the son of a cobbler, had milked his own people for, as Maciejowska points out, "cheap and obedient slave labor" for quite some time.

I also studied the revealing and revered book, Stolen Childhood. Lucjan Krolikowski, a prominent Polish priest, himself a deported Pole, wrote about the initial boxcar transports of the Poles, noting that sanitary conditions "mocked even the most elementary human requirements. Two-and three-week treks were completed in unheated cattle cars through the severe cold ... Hunger, disease, dirt and exhaustion decimated the exiles along the way."

These initial investigations, which I conducted several years ago for Grace Revealed, are in the forefront of my mind this winter -- mainly because Feb. 10, 2015, marks the 75th anniversary of Stalin's broad-scale deportations. I do not know if there can ever be just one kind of Pied Piper for the nearly-forgotten Poles, or if one person can heal the past. A collective can. One thing is clear however: This particular part of history is suddenly capturing attention. As a sign-seeking Californian, I cannot overlook the "signs" that a sea-change is occurring.

Documentary filmmaker Sophia Turkiewicz chronicles a unique aspect of the Polish deportations through the lens of a mother-daughter relationship in Once My Mother. And then there's author Glenn Kurtz. His new book Three Minutes In Poland: Discovering A Lost World In A 1938http://www.huffingtonpost.com/greg-archer/three-minutes-to-remember_b_6344588.html, while primarily focusing on the lost Jewish population of a Polish town, does include remarkable nuances to the Polish-Siberian experience as well. The Kresy-Siberia Foundation has long been an advocate for preserving the memory and events that befell the deported Poles. And the The United States Holocaust Memorial Museum is now including testimonies/documentation of individuals who were persecuted not just by the Nazis, but by their collaborators, Stalin among them.

Where do we go from here? For starters, this is a landmark year for the Poles. The mass deportations came in several waves in 1940 -- February, April and June. The time to honor their memory and legacy is now.

More importantly, the time to shift the World War II focus from just-Hitler to include Stalin has arrived. True, modern culture should never overlook Hitler's atrocities but in overlooking Stalin's, it robs nearly 2 million Polish deportees of their place in the history books and among the important discussions of history, time, place, ancestry and honor.