The transgender community has suffered since the 1970s from gatekeeping, when a white anti-trans medical professional, Dr. Paul McHugh, joined the staff at Johns Hopkins in Baltimore with the sole intent of shutting down it's clinical research on gender, thereby injecting confirmation bias into his "findings," which have since been debunked:

This interrelationship of cultural antinomianism and a psychiatric misplaced emphasis is seen at its grimmest in the practice known as sex-reassignment surgery. I happen to know about this because Johns Hopkins was one of the places in the United States where this practice was given its start. It was part of my intention, when I arrived in Baltimore in 1975, to help end it.

McHugh's work found favor among the largely white feminist movement of the time, which spawned what we now know as Trans-Exclusionary Radical Feminists, or TERFs, initially led by Janice Raymond, who were successful at lobbying for the exclusion of transition-related healthcare from U.S. health insurance plans in the 1980s.

It's not only early gender researchers and fringe feminists that have tried gatekeeping against the transgender community, there has also been a constant onslaught by right-wing Christian groups who would likely be shocked if they knew that the Bible actually describes what can only be seen as a divine case of gender confirmation surgery.

With all of this external gatekeeping attempting to deny transgender people the right to transition, live an authentic life, identify as a gender other than assigned at birth or seek medically necessary healthcare, by those holding narrow and extreme political or religious views, you would think that the community would be responding cohesively against further attempts at gatekeeping. Sadly, that is far from the truth.

Some people in the LGBT community, particularly those who are white trans men or cisgender women, are actively advocating for discrimination against and exclusion of non-binary genders. This is not only an act of internalized transphobia, it is also an inherently racist position.

A recent worrying trend among this group, is the sudden increase ofwhite privileged trans women, who seemingly almost always often identify as the outdated term transsexual in defiance of the transgender umbrella, or as trans*; which is itself problematic. These people claim that unless a person identifies as a binary gender, experiences and is diagnosed with dysphoria, and has or seeks surgical intervention, they are not truly trans despite the current standards of care for transgender identities published by WPATH explicitly stating:

..health professionals should not impose a binary view of gender. They should give ample room for clients to explore different options for gender expression. Hormonal or surgical interventions are appropriate for some..

In a surprising move, the Transgender National Alliance recently made the following statement online: 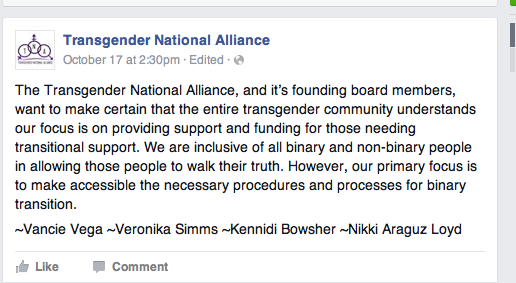 In an attempt to discuss non-binary identities with the group, I reached out to board member Nikki Araguz Lloyd and asked why non-binary identities were excluded. She stunned me by responding publicly, sending screen captures depicting a non-binary transfeminine person with a presentation not unlike the wonderful and inspirational Jacob Tobia who was asserting their femininity in a similar way. When asked what she was trying to say, Nikki clarified by making the following comments. First, the troubling:

This makes it very difficult for many to understand us.

Which was followed with an even more troubling comment, using the same kind of triggering rhetoric that been used against almost everyone in the LGBT in the press and by the media:

Have all the equal rights you want, don't impose your choices upon me.

If you're excluding someone based on identity and making comments such as those above, you are actively denying non-binary identifying people, such as myself, equal rights. You are saying that they are not the same as you, and not as worthy as you to be considered trans.

Additionally, transgender people do not need to seek cisgender approval for our own bodies, just as they do not need to seek approval with us for theirs. Not only is it a privileged position for someone to take, the insinuation that some trans people's identities should be cast aside in order for others to be accepted is also inherently racist. Many indigenous and native peoples throughout the world had, before the introduction and adoption of Western religion, or have genders in addition to male and female. Excluding those identities from the transgender discussion is the same as telling native and indigenous people around the world to take a seat in the back of the bus when discussing civil rights.

This is the same kind of arrogance and white privilege that overshadowed the gay rights movement in the early 1970s and that is still having an effect today, where black LGBT and LGBT of color are underrepresented or oftentimes erased from the public discourse.

No one has the right to police another's gender, presentation, or sexuality. Not even another person within the LGBT community. No gay man is too feminine, too masculine, too gay, or not gay enough. No lesbian is ever too butch, too femme, too lesbian, or not butch, femme, or lesbian enough. Just as no trans is too trans or not trans enough, no one is too black, too asian, too latin, too native, or not black, asian, latin, or native enough to have their gender acknowledged, respected, and celebrated.

If the Transgender National Alliance truly believed in equal rights, it would examine it's structural white privilege and dismantle the racist vestiges of colonialism within the organization and embrace ALL genders.