What are the stories in Totem 1.0 pt 2 ?
They are 40 weird sci-fiesque stories I wrote. I used voice bunny.com. You can get actors from all over the world to read anything for you. I told them "Read it like Hal 9000 from 2001: A Space Odyssey."

I like this weird idea...you know after you see a movie and you're trying to tell your friend about it and you sum up this two hour experience in a few sentences. So it's like you just watched twelve movies or something. 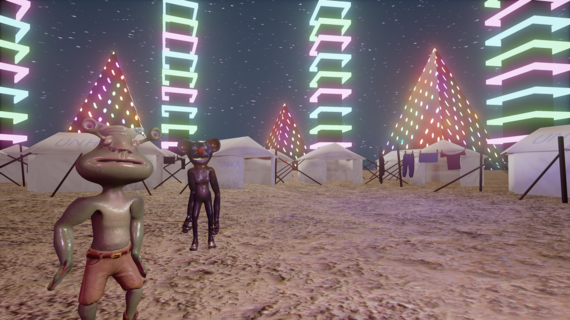 There's a huge contrast between the calm, peaceful feeling that your video evokes and that I was feeling when I floating in the virtual reality space and the uniform tone of the stories. The tone of the stories has a real anxiety.
Yeah, yeah. I mean, I feel anxious. But I think we're anxious people, generally.

Yeah!
[Laughs] I don't know, I always feel tired but also like I just drank an energy drink. That's how I feel on a daily basis. This guy, this is kind of a self-portrait [Totem35]. [Laughs] This is how I feel all the time.

But we sometimes make art to not feel like that, projecting our neuroses onto these objects in order to deal with them. 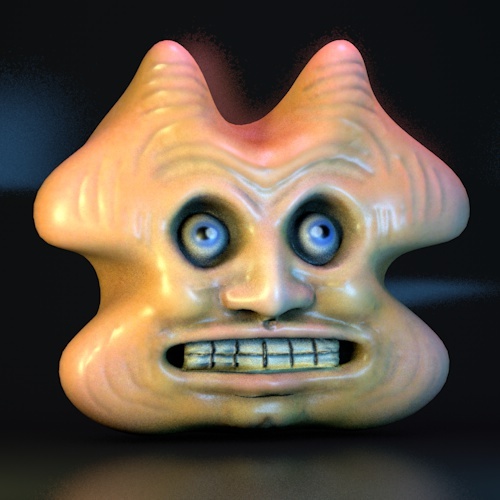 In this work and in Out of Body Experience Clinic, a lot of characters look unsettled or anxious; they don't look happy. Do you know what they're thinking about?
[Laughs] I think their thoughts are just pure anxiety; maybe they're instinctual. They're just on repeat and they're really anxious about that. They know that they shouldn't be on repeat and maybe they need to be full humans with consciousness but instead they're just 1s and 0s. 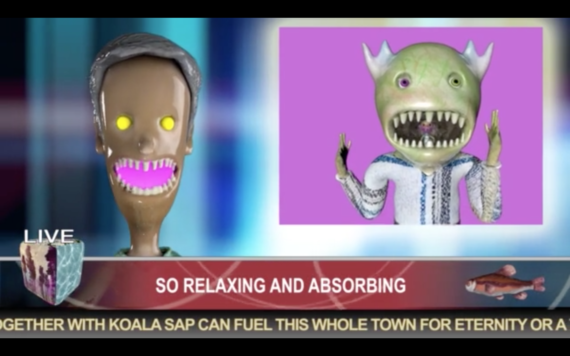 You've spoken before about how "technology is advancing and changing our everyday lives." What about its negative effects?
I'm super bummed out about the way technology is unfolding. I think a lot of what I do is to deal with that and the anxiety from it.

What I make is goofy and blobby because I don't have a design team doing it for me. I'm not trying to manipulate people. These programs have an ideology inside their code. Adobe's not sitting in a boardroom asking, "How can we make this sweet for artists?" They're asking, "How can we make this work flawlessly for ad firms?" You can tell a lie so easily with Photoshop. I think when you make digital art, you have to make it a little shitty and weird. Almost in a similar way to when you make a sculpture out of metal or wood, you usually don't paint it, you leave it exposed to show your process a little bit. With this stuff, I want to leave it a little exposed for what it is. I don't want to make some super slick advertising thing. I try to keep it a little raw and goofy.

I feel like so much technology now is being used to make life so much shittier. I hate that Airbnb just won that vote in San Francisco. They're undoing all the labor achievements of the last century, essentially that's how we're using it.

The amount of advertising we see is insane. Now you can't distinguish between what's advertising and what's content. That is, in a way, what I think this piece [Mouse and Man] might be about. You can't tell what it is. That's kind of what an online ad is: creepy but yet you're attracted to it. It's appealing to a weird sexual aspect of your psyche and you can't help but be attracted to it. You're like, "I don't care about Kim Kardashian's butt or if Mel Gibson got Botox." but somehow you click on it and go down this rabbit hole. And it's all put there by a robot. Humans maybe had something to do with making the ad, but its placement and how they're tracking you is all done by artificial intelligence. 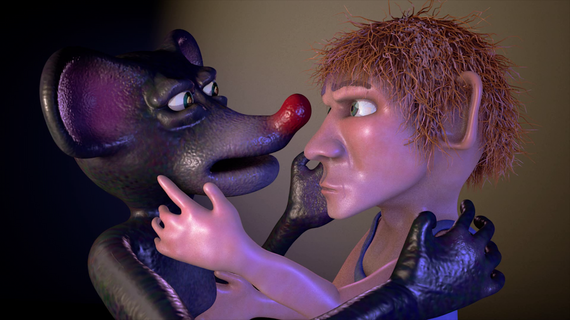 Seductive, but also dirty. Like bestiality is an uncomfortable fetish. But it's not really bestiality either because that mouse is a cartoon. That's the kind of weirdness that ads go to to get you to click on them. And then the fact that they're trying to disguise themselves as real content that you'd be interested in is doubly messed up.

That's a big reason why the characters look anxious. They're digital creatures in a weird new world. It's mostly terrible but the problem is I love it. I grew up with computers and I really love them and I want to use them. I'm trying to switch more and more to just use open source software because the ideology is more sustainable. For Adobe, the people who pay their bills are mostly doing advertising. Or Hollywood movies. The sculpting program I use is what they used to make the Hulk and other superheros. That's why when you use this stuff, almost effortlessly you start to make weird monsters. So I start to make these monsters but then it's just me so it's not perfected, they're all sloppy looking and anxious. [Laughs]

The most infuriating thing is that when votes do come up against these entities, they always win. Like Uber won here, Airbnb won in San Francisco. We're all deciding together that this is what we want. And it's just getting worse and worse. So we can be really angry about it or be insane about it. Insanity is a better way for me to deal with it rather than make really didactic work where I'm critiquing the ad world or something. There's more to technology and life than fabricating or responding to slick ads for toothpaste.

How could all of this not be creating crazy anxiety in all of us? Forget about it.
Did you read that NY Times article about working at Amazon? (link) One guy said he saw everyone he worked with cry at some point. One woman was so unhappy, working 80 hours a week and then it dawned on her that it was all to get toilet paper delivered faster to people. More and more that's where our creative energy is focused. That to me is the scariest part. Artists and engineers are having their creative abilities exploited to sell deodorant. That's where we're directing our energy.

Advertisers don't want to know how art can function. They only want to exploit it to sell things. 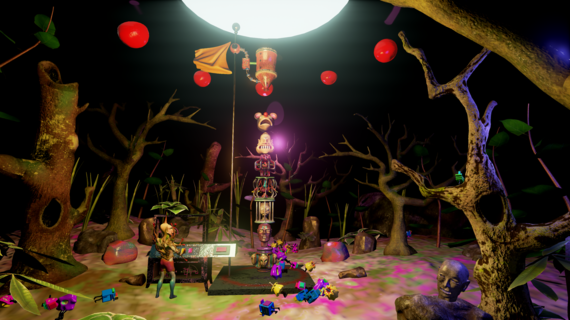 You have an installation coming up in Miami. What are you doing down there?
I titled it Somewhere on Mars it's Daytime and Wind is Blowing Dust Down From a Mountain and Into a Valley. The piece is two parts. The one part is a TV with a video game hooked up to a plant. You touch the plant and the game builds totems, 7 high, and then it blasts the totems into space. The second part is virtual reality. The totems fall through a vortex and five characters act out different performances based on the totems while they tell you a story.

I love to think about space. Because when you think about your problems you realize that there're planets floating around in space and there's weather and day and night and mountains and cliffs. Light-years away, there's a mountain somewhere. We couldn't be there, but right now it's happening; there's a dust storm on Mars. A lot going on right now is bad. And so is the weather on Venus. It's oddly comforting that the universe is just this big, expanding piece of chaos and we're part of it. Everything we're doing is fucked up, of course it is. And there are little things we could fix to make things a lot more comfortable for billions of people and it's infuriating we don't do these things. We're completely absurd. [Laughs]

More of Couillard's work can be seen at www.jeremycouillard.com and www.louisbjames.com. Somewhere on Mars it's Daytime and the Wind is Blowing Dust Down from a Mountain and Into a Valley will be on display in Bungalow 262 at the Miami Beach Edition from December 2-5.