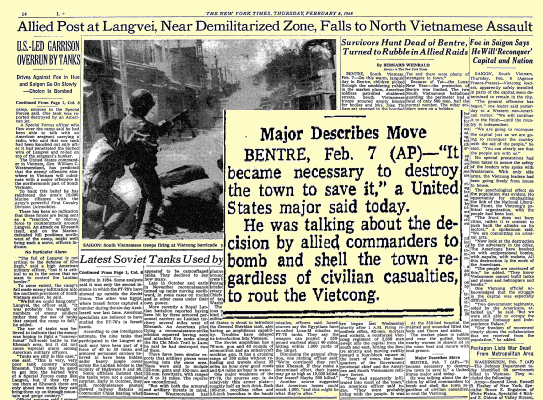 "BENTRE, Feb. 7 (AP) -- 'It became necessary to destroy the town to save it,' a United States major said today. He was talking about the decision by allied commanders to bomb and shell the town regardless of civilian casualties, to rout the Vietcong." Associated Press report from Bentre, South Vietnam, New York Times, Feb. 8, 1968

That quote, written by Associated Press correspondent Peter Arnett, would in the decades that followed become an allegory for the misguided strategy that doomed U.S. efforts in Vietnam.

Thoroughly infiltrated by the enemy, the town of Bentre was "sometimes considered a Vietcong rest and recreation area," the New York Times noted in its account of the provincial capital's destruction. In the grand scheme of American strategy, the civilian casualties were an unfortunate by-product in the ultimate goal of flushing the communist insurgency from South Vietnam.

History has issued its verdict on that strategy. Civilian casualties undermined efforts to win "hearts and minds" in South Vietnam and played a large part in losing the war at home.

It's not a difficult lesson: When the immediate harm is deep and sustained, it obscures any message of greater good in the long-term. That's especially true when the efficacy of the "greater good" of the future is open to question among its would-be benefactors.

That's as far into the Vietnam metaphor as I'll go here, except to say this: As colleges in Illinois move precariously close to financial ruin and the state's social services network slowly collapses amid the ongoing budget standoff -- all in the name of the greater economic good to be achieved some years down the road by some combination of business and government reforms -- Gov. Bruce Rauner rapidly is losing the "hearts and minds" he most needs to convert.

"I care very much about the students at Chicago State. They are being failed by Chicago State University. They have the widest achievement gap between white students and African-American students of any college. That is wrong. They are failing. And we're not going to tolerate that kind of failure," Rauner said. "I am sick and tired of this failure and excuses for it. Maybe what we should do is take the money that we've been sending to a failed institution and give it to the kids and let them choose their school. Maybe that'd be a smarter way to do it."

Yes, maybe that would be a smarter way. Maybe the would-be Chicago State students of the future would be better off getting state financial aid to go somewhere else. But that's little reassurance to the 7,200 students now attending Chicago State, many of whom can afford to do so only because of state MAP grant financial assistance that has been lost this school year due to the budget impasse. As their school cancels spring break in a bid to keep operating through semester's end -- and there's no guarantee at this point that state funding will arrive before the fall semester is to begin -- these students probably have little use for hypothetical talk of the prosperous Illinois that awaits under some undetermined form of Rauner's reform agenda at some undefined point in the future.

"Madigan's got a spy in most organizations," Rauner said. Great. The village is infiltrated. What next?

It needn't have been this way for Rauner.

But in issuing an ultimatum to House Speaker Michael Madigan -- until you pass my reforms, I'm not dealing on the budget -- Rauner ensured the result we have today. Anyone who has observed Illinois government from 1983 onward -- most notably in the Blagojevich years -- knows that Madigan does not respond to ultimatums, especially those that, like many of Rauner's initial reform agenda items, demand that Democrats become Republicans.

There's ample room for Rauner to claim victories that will help restore order and efficiency to Illinois government. His proposal last month to reform the state's purchasing system is one such example. But it appears Rauner has set his bar for victory on the budget so high that such smaller accomplishments don't matter.

It takes a lot of faith in the transformative power of Rauner's Illinois Turnaround agenda to believe that passing even a few pieces of it will make the current situation on Illinois' college campuses and in the rapidly deteriorating human services field worthwhile. On some items, like term limits and redistricting reform, there seems little if any connection to an eventual boost to the state economy.

The hard evidence we've seen -- most recently from Moody's -- indicates that the biggest impediment to the state's economy is the unstable government we've shown the world for more than a decade -- and never more so than in the last eight months.

It's hardly an admission of defeat to prevent more damage to the town while you save it.

NEXT ARTICLE: Eight hospitals in Illinois among nation's Top 100 best in 2016