Amanda Feilding and the Beckley Foundation are at the forefront of research into the potential benefits of whole cannabis and its individual cannabinoids, and part of a growing movement protecting rare strains of this remarkable plant. 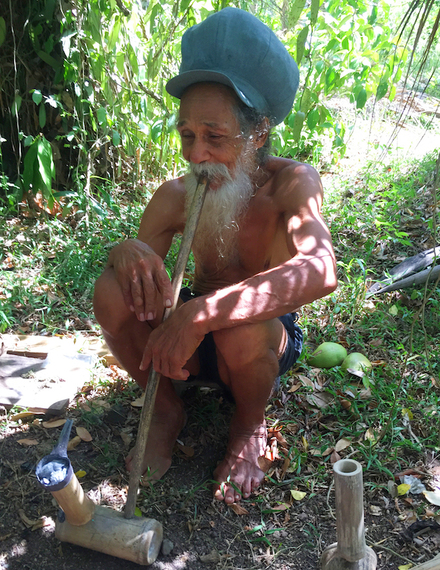 The movement to recover and investigate endemic cannabis strains started in the 1960s. Expeditions were embarked upon along the "Hippie Trail", and enthusiasts collected seeds to grow in their gardens around the world. The strains like Acapulco Gold, Pure Afghan and Chocolate Thai gained huge popularity at the time, but have subsequently faded away, and have been eclipsed by the modern cross-bred varieties.

Now there is a second wave of interest in these indigenous strains of cannabis. Strain hunters, as they call themselves, travel around the world visiting countries with rich cannabis cultures such as Jamaica, India, Thailand, Malawi, Morocco and others to collect seeds and investigate the cannabis landraces - ancient cultivated varieties of the plant, endemic to a particular region.

Humanity's history with cannabis reaches back to the dawn of civilization. Cannabis has long been valued for its long-lasting and strong fibre, it's nutritious and oil-rich seeds, as well as its psychoactive and medicinal properties. Over the last 4000 years, the plant's valuable, and often unique contribution to the religious, cultural, medical, agricultural, commercial and industrial sectors of human societies ensured that cannabis has been widely cultivated and spread from central Asia to Europe, Africa and the Americas.

The first medical applications, for appetite stimulation, anti-senility effects, and over 100 other ailments, are attributed to the legendary Chinese Emperor Shen Nung who lived around 2700 BC. These therapeutic uses were written down hundreds of years later in Shen Nung Pen-ts'ao Ching, a second century Chinese book of herbal remedies. The earliest archaeological evidence of hemp use for textiles and fishing nets, and dried cannabis flowers for ceremonial smoke, was found in Margiana, a proto-Zoroastrial site, dating back to 2000 BC.

The ancient plants were quite different from the modern cannabis strains. The majority of marijuana strains and seeds available today are the product of directed selection, and generations of crossbreeding of different varieties to achieve higher THC concentration, ease of cultivation, short harvest cycles, auto-flowering and other desired traits such as taste and smell. This creates a huge variety of different strains, however, in many cases their chemical composition and effects are not consistent.

Cannabis belongs to the family Cannabaceae. There are only 2 genera in this family, the other one being Humulus (hops). It is still debatable whether the three most common varieties of cannabis: indica , sativa and ruderalis are different species or sub-species, however the general consensus is that there is only one species, Cannabis sativa, with three subspecies (indica, sativa and ruderalis). Amongst the cultivars of cannabis the distinction of 3 varieties is a common way of describing the plant lineages and profile of effects. The "hybrid" strains, most common in today's cannabis market, are various crossings of indica and sativa varieties, categorised as "pure indica", "indica/sativa", or "pure sativa". Ruderalis plants generally have low THC content, and therefore are less popular. However some ruderalis crosses exist, where the aim was to breed quickly maturing, short and hardy plants with high CBD and low THC content.

The cannabis plant is very adaptable, and can survive and succeed in many different climates, from 47 degrees South, in New Zealand to 66 degrees North, in Russia. There are huge variability in cannabis phenotypes, from stocky little plants 20cm in height, even when fully grown, to 6m tall "trees", although the average height is 1-2m. There are many other variables, like the time of flowering, and its chemical composition - to name just a few. These original cannabis varieties, or indigenous strains adapted to growing in a particular region, are now commonly referred to as 'landraces'. 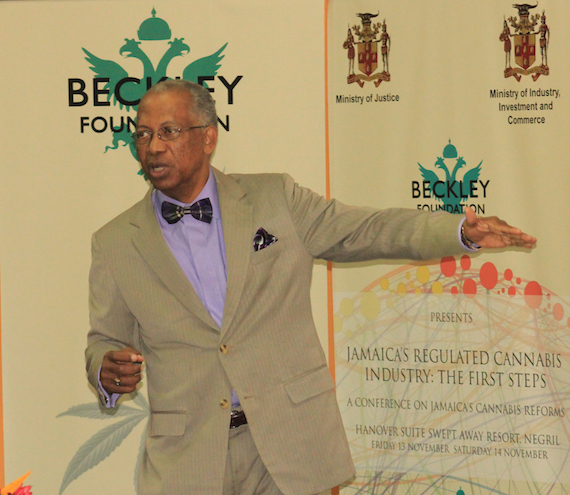 Why are cannabis landraces important?

In the current cannabis market there is a never-ending flow of new cannabis strains. Cannabis aficionados appreciate the diversity of flavours and subjective effects, while patients are beginning to be able to get special strains that are rich in particular cannabinoids (e.g. CBD), but not others. Discussions on the online forums and festivals like the Cannabis Cup praise certain strains and signature varieties, like "White Widow", "Girl Scout Cookies" or "Blackberry Kush", however pure landrace varieties are rarely seen. The danger of this cross-breeding is that the genetic diversity of selectively bred plants is more limited, and indoor growing often results in plants changing the content and quantity of its natural compounds.

Landrace strains are very well adapted to their local growing conditions, such as climate, soil, fertilisation and weather, developing their unique chemical profiles and retaining characteristics that are lost in many modern strains.

There is a growing understanding, both within the communities of patients and scientists (e.g. Ethan Russo, 2011 ) that the synergy between multiple components of the cannabis plant is important for the diversity of its therapeutic effects. There are conditions where the effects are mediated by THC or CBD only, but there are many more conditions where these cannabinoids, taken in isolation, have no effect. Cannabis plant has more than 400 different components, including terpenoids and flavonoids. Most of them have never been investigated, both individually and synergistically. The landraces are a treasure chest, providing the highest variety of different compounds, in contrast to, most commonly, indoor grown strains, selectively bred to enhance THC, and more recently, also CBD content. This assortment, if researched and investigated properly, can be harnessed and shaped to provide targeted medicines for different illnesses. Landraces have been called "The Holy Grail" of cannabis genetics, preserved and isolated in remote regions around the world.

Unfortunately, high population growth rate, increasing urbanization of the population, monetary inequity and poverty, and increasing cost of imported goods has led to unsustainable demand for land and natural resources to the detriment of the biodiversity and ecosystems in many places. Landraces have been rapidly replaced by the more profitable, faster maturing and more potent hybrid strains. In some places, like Jamaica, the landraces are almost extinct. It is important, therefore, to find and preserve these landrace strains before they are gone and lost forever.

Jamaica is currently at the forefront of global cannabis reforms, developing policies that aim to protect health, reduce harms, are cost-effective and respect human rights. After over 100 years of cannabis prohibition in Jamaica, the Rastafari community, which has long campaigned for its religious freedoms, and the many Jamaicans who use ganja for its medicinal purposes, are finally having their voices heard. The Jamaican government has recently legalised the use of cannabis for spiritual and medicinal purposes. This is the first time that a modern government has recognised the Rastafari sacramental and religious rights. Jamaica is now set to become a global hub for research, enabling the medicinal use of cannabis to flourish. Moreover, the emerging legal industry can provide jobs, improve economy and cultural understanding. The government is determined to protect the interests of the Rastafari and small farmers. 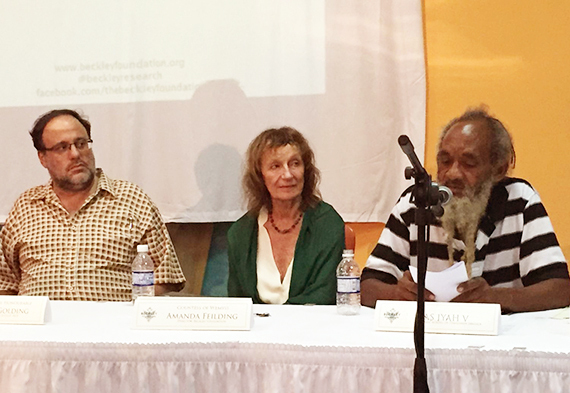 Until recently, policies of forced crop eradication incentivised Rastafari and other farmers into switching to the modern hybrid strains which have shorter harvest cycles, giving the farmers greater chances of their crops reaching maturity without being destroyed or stolen by the police. With the possibility of now growing legal crops, farmers can look back to older landrace strains which were grown for their medicinal, spiritual and recreational properties.

In November 2015, as part of the Rastafari Rootzfest, the first Cannabis Cup was held in Jamaica. HIGH TIMES received a total of 65 flower and hash entries from the local growers, separated into 2 categories: "Traditional farming" (outdoor-only methods) and "Modern growing" (indoor growing or outdoor with imported strains, fertilisation and automated irrigation). Analysis of these strains demonstrated that the hybridisation is already very well entrenched. A prime example of this is the famous Jamaican strain "Lamb's Bread", which was named after Bob Marley's song, but is actually a product of hybridisation with "Skunk#1" imported from Holland in the late 70s early 80s. Nevertheless, one or two entries for the competition were the original landraces, like the "Longtime Weed", referring to its long flowering time. To coincide with the Cannabis Cup, the Beckley Foundation hosted a conference with the Ministry of Justice and the Ministry of Industry in Negril which explored and layed out the development of the new regulation for the medical cannabis industry and the sacramental rights of the Rastafari as well as highlighted the need to protect the landrace strains and the importance of studying them.

Studying and preserving landraces is important from both social (as part of Jamaican cultural heritage) and biological perspectives (vast genetic diversity, often lost from the modern hybrid strains). Thousands of studies have investigated cannabis' effects, yet research tends to focus on the 'problematic' aspects of the drug from the perspectives of psychiatry, toxicology, and criminology. Scientific research into the mechanisms of action - and potential benefits - of the cannabinoids that make up the plant's complex biochemistry, on the other hand, remains scarce, but the future is finally looking brighter for cannabis research and the recognition of the abundant gifts that this amazing plant can offer to humanity. 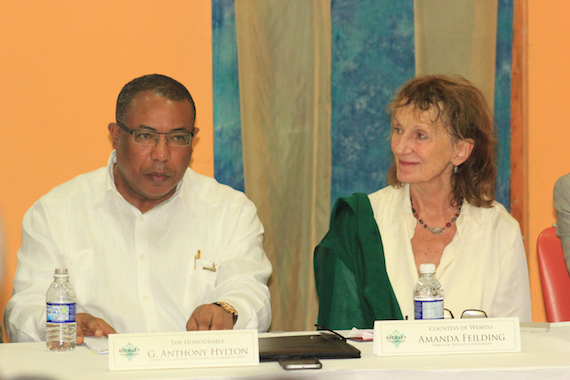 Amanda Feilding and the Beckley Foundation are working with academic and other leading institutions, including Rastafari communities, to cultivate and undertake scientific research on different strains of cannabis. They are particularly keen to re-introduce the traditional Jamaican landraces, which are not only invaluable for the preservation of genetic diversity, but are also an integral part of the country's cultural heritage. In collaboration with the University of West Indies, they plan to identify and study Jamaican cannabis landraces, in order to increase the knowledge of the medicinal properties and to disseminate this information to scientists and doctors.