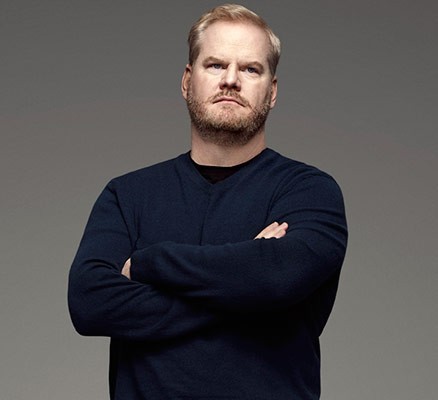 Some comics are preceded by a big introduction, naming their successes on different media, their drawing power in person or their well known work to excite the crowd. Jim Gaffigan walks to the microphone center stage after only "Ladies and Gentlemen, Jim Gaffigan." The roar from the packed Greek Theater in Los Angeles already tells you the affect he's had on his audiences for years, and why he had the most watched comedy special on Comedy Central last year. He has had nine comedy albums and the last two were nominated for Grammys, and he's a New York Times best selling author.

His uniquely self effacing style takes self detriment to a whole new level. It would make the early work of Woody Allen seem as if Allen were a braggart. Yet Gaffigan is so bold about his short comings that you're laughing with him, even as you're cringing at his moments of misery.

Pale and heavyset, he comes right out of the gate with "Hey, you know what? You don't have to tell fat people they're fat. They already know." He proudly explains he's wearing his shirt tonight because 'it fits." And how he's recently 'fatted out' of some clothes. "That's a milestone moment," he points out, trying to figure out how it happened. "Maybe it's because I'm constantly eating."

Gaffigan is comfortable with his uncomfortableness. His continual third person high pitched whispering commentary, however, is not. It's his unique trait and it endlessly berates him.

"Is he just going to talk about being fat all night...?" he asks in the high whisper between his fat jokes. "I can't believe he said that about his kids," the voice will say inbetween his family jokes. It's a harsh and brilliant choice that he constantly invalidates his whole act, while performing it.

Regardless he bravely plods on as the voice rises in shocked confusion that he's plodding on. Perhaps it's a voice he hears in his head, or one he's afraid he'll hear in the audience. It literally gives color commentary throughout his show. "I can't believe he said that about Jesus..."

His comedy is also brazenly clueless, particularly when he warns us:

I know religious jokes make some people uncomfortable. Especially for those of you going to hell.

Or when he discusses the environment:

For the record, I'd never eat a dolphin, because I don't eat fish.

Or as he talks proudly of his children and how they've ruined his life:

I love my kids. But parenting is unending, exhaustive and thankless. But eventually you die.

Comics can take several roads to center stage. They can objectively observe, and make fun of you, like Seinfeld. They can become many people and show their faults and charms, like Crystal or Williams, or they can miraculously make you feel as if they're on stage talking about you. When they are failing at the same things you fear you are, so spectacularly, it makes you feel like there's a little hope for yourself and that you're not alone.

Gaffigan has built an audience for himself by pointing out that his simple life seems so terribly hard that he should be asked to stop trying because he's embarrassing everyone else. That's why it's so funny. And that's why there may be hope for the rest of us.