Joan Baez has a marvelous new album out, a quiet, wisdom-filled work called Day After Tomorrow produced by Steve Earle and filled with songs by him, Elvis Costello, Tom Waits/Kathleen Brennan, Thea Gilmore and others. Tunes like the brilliant opener "God Is God" (you can listen to it here), the ancient-sounding "Rose Of Sharon" (a new tune that sounds like some long-lost ballad from 300 years ago) and Patty Griffin's "Mary" reveal a voice that is older, obvously, and wiser, certainly. Where once that angelic soprano would ring out over a crowd at a civil rights march led by Martin Luther King Jr., now Baez can speak quietly and confidently, knowing we'll listen.

"Gravity has a big part to say," says Baez, in an exclusive interview with Huffington Post. "The voice lowers and lowers. Every brilliant arrangement I worked out over the years, I can't use anymore because it's just too high to sing." 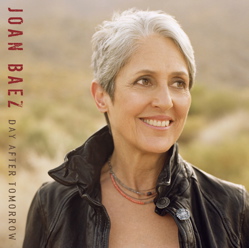 Her voice may not be quite as flexible, but her way with a lyric is better than ever. Perhaps a youthful joy in pure melody has been replaced by a greater emphasis on the words, such as the title track "Day After Tomorrow" where Baez sings the lines "It is so hard and it's so cold here" in such a plain, unadorned voice she's practically speaking them. The effect is gripping.

But how could you talk to Baez -- a fighter for social justice virtually her entire life (her first act of civil disobedience was to refuse to scurry to cover during an air raid drill at school) -- and not talk about the election? Her last CD, a live album, was recorded in New York City's Bowery Ballroom just days after Bush won reelection in 2004.

"Days!" says Baez, who is celebrating 50 years of performing. "I was amazed we could even work. New York City was in a state of total depression."

The city was like a dead man walking, wasn't it?

"That's what I call McCain," she laughs. "Dead Man Walking and Shotgun Sally - what a terrific ticket."

You won't be surprised to hear Baez has endorsed Barack Obama. But you should be. Throughout decades of campaigning for the weak and the powerless, the poor and the lost, Baez has always been steadfast in staying away from politicians. She's never endorsed so much as a dogcatcher, much less someone running for Congress or the Senate or the White House. But Barack Obama is different.

"I am positive and hopeful," says Baez, who turns 68 on January 9, just 11 days before the next President is inaugurated. "I've always shunned party politics, for good reason. Obama just overwhelmed me really -- knowing that once he's in office he'll probably do things I hate." She laughs. "But the things that appeal to me and young people and poor people and black people -- it's undeniable. It feels like King. I'm sad in a way that he didn't stay outside of the system because I feel like he could have spearheaded a real movement. I don't know how much he can do in that office."

What about Sarah Palin? When she was announced and most people didn't know her or her record, did Baez think, even for a moment, "Hmm, a woman. That's interesting."

"No," says Baez. "I took one look at her and I thought, 'Jesus Christ. What has happened?' She looks like a retired pom-pom girl."

Is it a safe bet Baez didn't get along with the cheerleaders in high school?

"You know what, I tried out to be a cheerleader," she confesses. "Me and my friend Bunny, we had a wonderful [cheer] worked out, but we were Mexicans. They were absolutely not interested in how clever we were. [As for Palin,] I thought it was panic. Are they stupid enough to keep it up? And to the credit of the American people, her rising star is starting to dip below the horizon at least a little bit."

But what is it about Obama that convinced Baez to endorse a politician for the first time in her life?

"The level of intelligence," she explains. "The reintroduction of the word compassion. The concept of sacrifice. The interest in literally reaching out to countries - like Spain," she laughs, then adding seriously, "Any guy running for President who has a picture of Mahatma Gandhi up in his office is going to intrigue me."

"The only way I can really make sense of it is King because my politics have always been at the base of the pyramid. This is the first time I've been willing to extend or stretch my stuffy beliefs to the top of the pyramid. With King, it was so active. We were shoving that pyramid around from its base. That's what I'm comfortable with. The higher up that pyramid you go, the more dastardly things you're going to be requested to do." 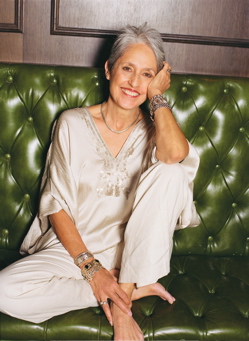 On Tuesday, October 28, Baez begins a US tour at Town Hall in New York City (the first of two nights). She's sure to sing a healthy chunk of her new album and draw upon the wealth of classic tunes she's sung and made famous over the years. She's performed in New York many times. But she's never sung at an inauguration. If Obama is elected and she could perform at it, what song would she sing?

"'Swing Low' or 'Amazing Grace,'" says Baez. "Whatever will just add to the joy and excitement that everyone -- in my camp anyway -- is experiencing. A song like 'Amazing Grace' brings out the absolute, utmost good in just about anybody. It's a song that people sing on. It's a song that people are moved by and they have been for my entire 50 year career. It can be an homage, easily."

And hopefully one of the songs on her new album would fit right in by proving prophetic. On Thea Gilmore's "The Lower Road," Baez sings "Because for every midnight hour, there's always a rising sun."