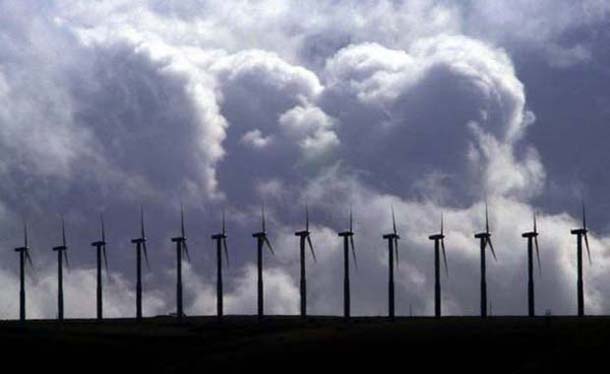 Unless Congress acts soon, the wind industry will have to trim its sails--and its workforce.

An essential federal tax break for the fledgling industry, scheduled to expire at the end of the year, has become a victim of Washington gridlock. President Obama was in Newton, Iowa, yesterday at TPI Composites, a leading wind blade manufacturer, to again ask Congress to extend the production tax credit, which provides a credit of 2.2 cents per kilowatt-hour of electricity produced by wind turbines--as well as geothermal, biomass and underwater turbines--for the first 10 years of production.

Over the last decade, wind power has become one of the fastest growing energy sources around the world. According to the U.S. Energy Information Administration, in the United States alone wind generated 120 billion kilowatt hours last year, 20 times more than in 2000 and enough to light up more than 20 million households. That 32 percent average annual growth rate is due to a number of factors, mainly improved technology, state standards requiring utilities to ramp up their reliance on renewables--and the federal production tax credit.

The production tax credit, which debuted in 1992, helps level the playing field between wind and coal and natural gas and is critical for financing new projects. Although most wind power developers don't pay taxes because they're not yet turning a profit, they can raise capital by selling the credits to companies that do.

Unlike a number of fossil-fuel and nuclear-power subsidies that are permanent, the production tax credit has to be renewed by Congress every few years. That puts the relatively new wind industry at a distinct disadvantage, making it difficult to attract investors and plan years in advance. And if Congress doesn't extend the production tax credit this year, the industry will take a significant hit. A December 2011 study by Navigant Consulting estimated that investment in wind projects will drop 65 percent, from $15.6 billion in 2012 to $5.5 billion in 2013; the industry will have to lay off nearly half of its workforce--some 37,000 people--next year; and wind developers will install only 2 gigawatts of wind power in 2013, less than a quarter of what is expected this year.

Extension Bills Twisting in the Wind. Bipartisan bills that would continue the production tax credit for another four years are languishing in both houses of Congress. The House bill, sponsored by Dave Reichert (R-Wash.), has more than 100 cosponsors, including more than a dozen Republicans. The Senate bill, introduced by Chuck Grassley (R-Iowa), has eight cosponsors, including three other Republicans. Even the U.S. Chamber of Commerce and the National Association of Manufacturers support the legislation.

What's holding it up? The production tax credit's "cost" to the Treasury, estimated at $1 billion a year in lost revenue, and a dispute over how to pay for it sparked by concerns about the federal deficit.

In March, President Obama asked Congress to eliminate $4 billion in annual federal subsidies for the oil and gas industry, which could more than cover the production tax credit. In response, there has been a flurry of bills. One sponsored by Robert Menendez (D-N.J.) to cut more than $20 billion in tax breaks for the largest oil companies over the next decade failed in the Senate in late March. In late April, five House Democrats, including Ed Markey (D-Mass.) and Henry Waxman (D-Calif.), introduced a bill that would slash $44.8 billion in oil industry tax breaks over the next decade, extend the production tax credit for eight years, and provide $5 billion in tax credits under the Advanced Energy Manufacturing Tax Credit. And on May 10, Sen. Bernie Sanders (I-Vt.) and Rep. Keith Ellison (D-Minn.) introduced a bill that would kill more than $110 billion in oil subsidies over the next 10 years.

Sen. Jim DeMint (R-S.C.) and Rep. Mike Pompeo (R-Kan.) are taking a different tack. The same day Sanders and Ellison introduced their bill, DeMint and Pompeo held a press conference to blast the president for favoring renewables over the oil industry and introduce a bill that would eliminate 15 specific tax credits that benefit either oil, natural gas, coal, nuclear, electric vehicles, alternative fuels, solar or wind. The one pertaining to wind? The production tax credit. To make their proposal revenue neutral, they would cut corporate income tax rates across the board.

Although it appears evenhanded, the DeMint-Pompeo bill would severely hamper wind and solar but leave untouched a number of oil, gas and coal subsidies, including the percentage depletion allowance, the ability to expense the costs of exploration, and the accelerated depreciation of certain kinds of "geologic property." These and other tax breaks they left out of their bill will be worth about $12.2 billion to the oil and gas industry between 2010 and 2014, according to an April 2011 Congressional Research Service report.

Congress' Bias Against Renewables. The DeMint-Pompeo bill is as unlikely to pass as one ending oil subsidies, but its attack on wind, solar and other emerging clean technologies is emblematic of a longtime congressional bias against renewable energy. Several recent studies document that Congress has historically spent substantially more to encourage fossil fuels and nuclear power than renewables.

A September 2009 study by the Environmental Law Institute (ELI) provides a snapshot of this disparity. It found that between 2002 and 2008, the government gave fossil fuels $72.5 billion, corn ethanol $16.8 billion, and renewable energy $12.2 billion in subsidies. In other words, 71 percent of federal subsidies went to oil, natural gas and coal, while only 12 percent went to renewables.

The ELI study did not include nuclear energy, but a September 2011 study by DBL Investors, a venture capital firm, did. It calculated subsidies for nuclear, oil and gas, and renewables during the first 15 years they received federal support--a critical time to get projects off the ground. For each technology's early years on the dole, the federal government spent in inflation-adjusted dollars an annual average of $3.3 billion on nuclear, $1.8 billion on oil and gas, and less than $400 million on renewables.

The historical averages tell a similar story. The DBL Investors report found that the oil and gas industry enjoyed an average of $4.86 billion in subsidies per year from 1918 to 2009. The nuclear industry--which to this day would not be economically viable without significant government support--benefited from an average of $3.5 billion in subsidies a year from 1947 to 1999. Even biofuels pulled in an average of $1.08 billion a year between 1980 and 2009. But the new kid on the block--renewables--averaged only $370 million a year in subsidies between 1994 and 2009.

The DBL Investors study left out coal because the authors didn't have access to information quantifying federal and state coal subsidies that go back to the early 1800s. Suffice it to say, the federal government has lavished considerably more on the coal industry than renewables. In 2008 alone, coal received an estimated $3.2 billion to $5.4 billion in subsidies, according to a January 2011 Harvard Medical School report. That report calculated the "life cycle" cost of coal in 2008--including its impact on miners, public health, the environment and the climate--at $175 billion to $523 billion, with a best estimate of $345 billion.

Finally, a March study by the Congressional Research Service compared the Department of Energy's research and development funding for renewables versus nuclear, fossil fuels, energy efficiency and electric systems. From 1978--when the agency was established--to 2012, nuclear energy received $46.87 billion (36.9 percent), fossil fuels received $32.23 billion (25.4 percent), and renewables received $20.94 billion (16.5 percent) out of a total outlay of $127.03 billion (in 2011 dollars). Again, renewables came up short, and energy efficiency--the quickest, most cost-effective way to cut emissions--did even worse, receiving only $18.64 billion (14.7 percent) over those 35 years.

Our Upside Down National Energy Policy. Every time energy prices spike, as gasoline prices did a few months ago, pundits and politicians complain that the United States doesn't have a national energy policy. But if the way the government allocates taxpayer dollars is a key indicator of national priorities, we do have an energy policy, clearly articulated or not. And that policy is upside down.

The question should be not whether the government should subsidize energy. It clearly has a role to play, and has been playing it for quite some time--more than 200 years in fact. The question should be whether the government should continue to underwrite extremely profitable, mature industries--especially highly polluting ones--at the expense of nurturing new, promising low-carbon alternatives. The obvious answer is no.

Renewables currently generate only about 5 percent of U.S. electricity, but by 2030 they have the potential to produce more than 40 percent, half coming from wind. That would just about replace the share currently generated by coal, which is responsible for more than 80 percent of U.S. utility sector carbon emissions. That would go a long way to protect us from the worst consequences of global warming. Continuing business as usual, on the other hand, would not only be a tremendous waste of taxpayer dollars, it would threaten the future of the planet.