VIDEO: We chat with Lin-Manuel Miranda, Luis Miranda, Jr, and the Girls of Girl Be Heard

When you think of a spotlight, it's hard to imagine a brighter one than the one shining on the Broadway juggernaut, Hamilton, and its creator and star Lin-Manuel Miranda. Whether he is rapping for the President of the United States, winning a Pulitzer Prize or appearing on countless talk shows, the recent success of the hit musical about its namesake Alexander Hamilton has shot Lin-Manuel to meteoric fame. However the musical about history is not where he wants to mark his place in it. He wants to be remembered as a person who is his driven to bring about equality and change.

Girl Be Heard honored that drive presenting Lin-Manuel and his father Luis Miranda, Jr. with their first ever Fairy Godfather award. This title recognizes the road paved by them as champions of equality. I've had the pleasure to get to know the girl-led social justice theatre company that helps young girls overcome mountainous obstacles and hardships they face to find their voice. Girl Be Heard encourages, inspires, and ignites a fire within young women providing a safe space to not only create incredible theatrical experiences, but to develop confidence, overcome, and believe there is opportunity for all. 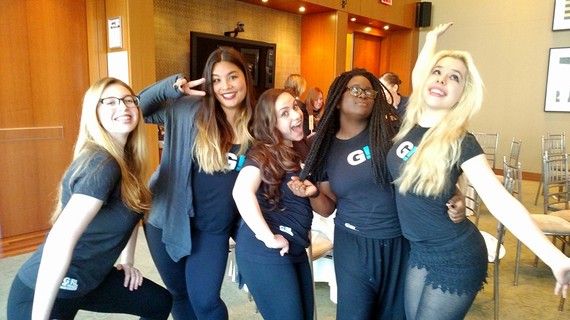 Lin-Manuel Miranda and his father, Luis Miranda, Jr. are no strangers to the fight for equality and finding theatre as an outlet. Luis has sat on numerous Boards and worked on behalf of countless nonprofit organizations. He is currently the chairperson of the Broadway League's Latino audience development program, Viva Broadway, and he has known Girl Be Heard's Co-Founder, Jessica Morris, for years as they share a passion for community advocacy. 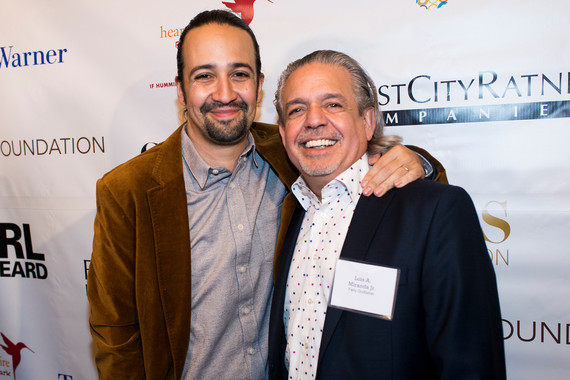 I had the honor to speak with the exemplary father and son prior to the ceremony. I asked Lin-Manuel the earliest memory he had when he first realized female inequality. "It was probably on a cellular level before I was ever conscious of it, growing up as a boy in a Puerto Rican household and being the baby boy getting more than my sister got," he responded. "It starts on a family level and you see how that spreads systemically. Organizations like Girl Be Heard help address that."

Girl Be Heard started as a small nonprofit in 2008 with just 12 girls, and has now grown to 170 members ranging from ages 12-21. It's an international movement that engages local & global audiences in schools, refugee camps, faith-based communities, detention centers, as well as the White House, the United Nations, and even TED conferences. I can tell you firsthand that I have witnessed this movement, and how it has literally saved girls' lives.

Through performing arts, the girls tackle such harsh topics such as eating disorders, sexism, abuse, depression, and suicide. The vital work of Girl Be Heard has helped wonderful young women break out of stereotypes and escape insurmountable odds, helping them realize their full potential. The girls are finding their voices and through role models such as Luis Miranda and Lin-Manuel Miranda, now feel their voices have a place.

As one member of Girl Be Heard, Veronica Marks, eloquently stated during her performance, "When I thought theatre was twenty years behind, Hamilton pushed it fifty years ahead.... Hamilton proved that theatre is for all the people who have never seen themselves in it. I realized that not only is theatre filled with possibility but that it IS possibility. Not only that it demands reinvention but that WE have the power to reinvent it."

In his acceptance speech, Lin-Manuel Miranda spoke of a colleague who told him he was creating ripples through his work like throwing a rock in a pond. He tearfully said seeing the girls perform made him feel like the tide was coming in; it humbled him and overwhelmed him. If this performance is any indication, these girls will create a wave of talent, power, and grace that will come to shore for many years to come.

The last song in Hamilton begs the question "Who Lives, Who Dies, Who Tells Your Story." Through the work of the likes of Lin-Manuel Miranda, Luis Miranda Jr., and Girl Be Heard, these young girls will continue to live, overcome, and tell their story.

For more celebrities, causes, & incredible nonprofit organizations, please visit Spotlight On TV
For booking, spotlight suggestions, & inquiries email info@spotlightongiving.com
What cause do you shine your spotlight on?