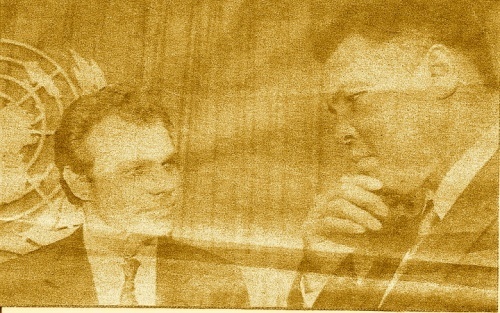 He was so different that we might have expected him to go to the grave screaming of his greatness. However, we all saw a piece of ourselves in him, and his greatest character strength was that he saw in everyone he met a connection to the higher. He was our opportunity to reach out to greatness, and for him each of us was a connection to a unique person but also his own humanity. Humility defined "The Greatest" as much as any accomplishment or acclaim. In all the tributes paid to Muhammad Ali upon his passing, the most often shared by most of us who knew him, even had the smallest bit of him for a moment, is "lover of human beings" (Jim Brown). "Friend" is as often mentioned even if you were one of millions who had the opportunity to be in his company. Two decades earlier, Bono and I shared our experience in meeting him. Bono noted how he was influenced by Ali's determination to replying to the thousands of letters he received, even if it was a signature, as part of his connection to each as an individual.

Muhammad Ali defined my assimilation as an American and growth as global citizen. When I first came to America, some still insisted to call Muhammad "Cassius Clay." However, he soon prevailed with an openness even as the rule of law would vindicate his political activism as well as the notion that I as "Muhamed" was part of the American fabric. As Muhammad prevailed in his case before the US Supreme Court, America also won. I was elected to my Student Council (See: "Growing Up a "Patriot?") at Valley Forge High School in Parma, Ohio, a greater tribute to my fellow students than any credit to me. My friends called me "Mo" but all also knew that my name was "Muhamed" and embraced that as part of my American identity, even as an immigrant I was not yet a US citizen.

As I moved South to New Orleans to Tulane University on an American football scholarship, it made me part of another journey. America was transitioning from segregation to fuller embrace of diversity. My football team was becoming integrated for the first time. Black and white shared not only locker-room, but also purpose and teamwork. By eating together, sharing dorm rooms and being part of the same social fabric we became a better team, a top US college squad. Diversity was our ally and not a divisive source.

Muhammad, the Global Citizen with the "Beautiful Soul": 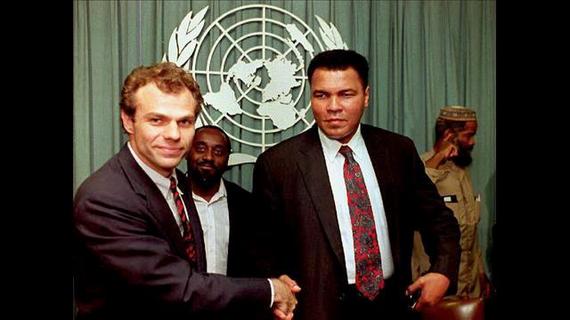 The next time I had the opportunity to met Muhammad Ali, he actually came to meet me, at the United Nations in 1992 where I was representing Bosnia & Herzegovina, (BiH). Muhammad wanted to do as much as he could to urge action to confront the genocide being unleashed at that time. While it was the Muslim population of BiH that was being targeted, we both understood that it was diversity that was also under assault and that stereotypes were being used as the weapon of indifference. "Hearts, minds and souls know no color" according to Thomas Hausser's biography, "Muhammad Ali: His Life and Times."

A few years later Muhammad Ali would come back to the UN to be appointed a United Nations Messenger of Peace. He had lit the Olympic Torch for the 1996 Atlanta Games. George W. Bush would bestow upon Muhammad Ali, America's greatest honor, the Medal of Honor. Upon his passing, the former US President described Muhammad, as "pretty," (employing a term Ali used to describe his unmarked face after so many one-sided fights), but George W stated:

'It probably had to do with his beautiful soul.  He was a fierce fighter and he's a man of peace, just like Odessa and Cassius Clay, Sr., believed their son could be. Muhammad Ali was an iconic and historic figure who thrilled, entertained, influenced, and inspired millions. Americans will always be proud to have been in his corner and called him one of our own."

Not Always "in His Corner":

Americans were not always in Ali's corner. He was the target of haters then as we have had a resurgence now of attacks upon difference and diversity. Fortunately our rule of law system, even if flawed and not always on the right side of history, has also been part of a progressive evolution moving to the vision of our Founding Fathers and Constitution. Ali's bravado rose to confront the stereotyping of and injustice to people of color, but he also employed a diplomatic version of "rope-a-dope" to overcome offense to his personal identity. The haters punched themselves out. In the meantime, Muhammad, a convert to Islam, worked to further understanding among all religions and turned to confront the extremists, the haters within Muslims. As much as the death of Muhammad Ali may appear to evoke the passing of a time in the US and globe beyond, his time and lessons by example may be never more timely, or more accurately, urgent to our needs and responsive to the resurgent tide of haters. (In this article I will not write the name of any Haters as they cannot even step into the ring with Ali, whether as Americans, or persons of God or part of a shared humanity.)

"Humor" is another common description of Muhammad Ali's greatest attributes. When he came to see me at the UN, more accurately to symbolize his solidarity with Bosnia & Herzegovina, his legendary art of the word was largely subdued by Parkinson's, but his intellect and humor were more than intact. He sought me out as individual in our brief interaction seeing beyond my heavy responsibilities as the very young representative of BiH and its suffering people. He did this amazing physical illusion which made him appear to be floating. Think though this was also a reminder that he did not walk on air, but grounded in his own faults and contradictions.

He was a convert to Islam whose life, family and children may not have fit the expectation or stereotype. He was the greatest of Americans even as he questioned US politics of the time and convenient historical narratives. He was a global citizen who in the end projected America as a model that could further progress toward embrace of openness and diversity. Controversy was not fabricated but challenged traditions of inequity or simply static thinking. Celebrity was not an adornment or mere endorsement. Ali could not have accomplished so much without his great talents, persistence, charisma and courage to challenge, but he realized his greatness by also being humble.

Parkinson's robbed him of his speech. He was no longer so "easy to look at." However, he told me that did not blame God. He did not seek restitution with revenge. Rather, he recognized how fortunate he had been, and sought to share that fortune with as many as he could, whether an autograph, a smile, a word or a deeper gesture through one of his many humanitarian actions. Consistent with his wishes, while led by a Muslim Imam, Ali's funeral services will reflect his inclusive love and respect for all and include many faith traditions, a plan laid out years earlier by Muhammad himself.

Muhammad Ali observed, correctly: "It's not the mountains ahead to climb that wear you out. It's the pebble in your shoe." The pebble is within us as is the desire to overcome the mountain.