Conducting a measured, informative, respectful conversation on Twitter is an art. I know because I have not mastered it, and the consequences have been--as they say--interesting. On June 6, 2015 journalist and film producer, Elinor Burkett published an Opinion in the New York Times Sunday Review concerning the coming out of a well-known public figure, Caitlyn Jenner. Jenner, formerly well known as Bruce Jenner, was the 1976 Olympic Decathalon record setter and seller of Wheaties. Subsequently, she was the husband (now divorced) of Kris Kardashian and father of their two daughters, as well as a player in the reality TV show "Keeping Up with the Kardashians", and was followed up by a cover spread and lavish inside story in the July issue of Vanity Fair. Famed photographer Annie Leibovitz's stunning visuals of Jenner's coming out received huge public attention.

The press went nuts, in predictable ways. Fox News was snarky and negative while MSNBC fell all over itself to accept everything Jenner said at face value. No representative of the giant media companies did critical reporting, not on Jenner, and more importantly not on the phenomenon of transgender. The major media outlets did not mention the terrible dangers from violence (for example, on the same day as the Vanity Fair release there was minimal coverage of an incident in which a trans woman was pushed onto the NYC subway tracks), nor the discrimination nor the psychological violence many who are poor and/or non white--and especially poor, of color and trans--experience. The press abjectly failed to use the Jenner moment to open a deeper and more honest discussion of gender diversity.

I read Burkett's piece after having watched several weeks of high profile media hoopla culminating in a kind of over-the-top TV news enthusiasm for the Vanity Fair photos; parts of the piece resonated with me immediately. I felt relief that someone interjected some actual commentary and I reacted (too) quickly with three tweets (in box below). 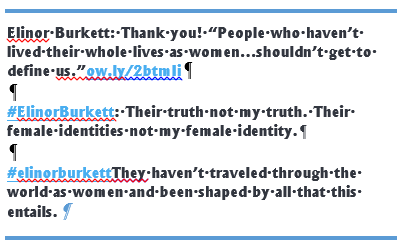 My mistake, for which I have been duly excoriated, denounced and generally sworn at, was to state my feelings publically in a medium--twitter--that does not permit reasoned exchange. As I saw no way to respond effectively to name-calling and curses, I first chose silence. But after transfeminist writer (and Brown University student), Ragna Rök Jóns appealed to me to respond I started to reply. As the twitter medium was only moderately pliable in my hands, however, I promised to write a long form response.

Since my posting, I have received many reading suggestions (and read the majority of them) from people who rightly felt I was not up to speed on trans theory and on the issues currently confronting diverse trans communities. Here too Ragna Rök Jóns was especially helpful with readings and an email conversation that advanced my understanding of the twitterverse's response to Burkett, and to me for supporting the article. These included specific rejoinders to Burkett (1), as well as books and articles such as Julia Serrano's Whipping Girl and videos such as Laverne Cox's speech accepting a GLAAD award. I am grateful to those who took the time to send me links and titles, and plan to update, accordingly, the reading lists on gender and sexuality that can be found on my own website.

The Burkett critiques are forceful, furious, and sometimes incisive. Some make points with which I fully agree. And yet, even as I read them I saw the Times article as a kind of Rohrschach test. We see in it what we bring to it. Let me first acknowledge the justice of some of the criticisms.

1. There is too much generalizing about transgender. The case of Christine Jorgenson, made famous in the 1950's established a narrative for male to female transitions of a man trapped in a woman's body. Jan Morris's memoir, the Renee Richard story, and Dierdre McKloskey's Crossing all played with this narrative in one way or another, and they certainly dominated the public conversation (to the extent that there was any conversation at all). But Burkett's critics point out that these women represent a small but privileged portion of people who are transgender.
2. . The voices of people who are more gender ambiguous (see Katherine Cross's essay and the many and diverse stories in Transgender Today), who are poor and/or of color, who face daily violence are pretty well erased in a high profile transition such as that of Caitlyn Jenner.
3. Critics denounced Burkett for her inconsistent use of male and female pronouns. It was not something I noticed on first reading, and I heard similar confusion from TV commentators. I am myself perplexed, especially about the rationale for pronoun use when referring to Jenner as a past Olympic athlete who competed as a man. One argument for retroactively calling Jenner Caitlyn is that in this period Jenner was already a woman, but had not declared it publicly. But this suggestion makes the "becoming" part of the transition difficult to grapple with. It is this latter issue that I responded to when Burkett wrote "they haven't traveled through the world as women and been shaped by all that this entails." I'll return to my reading (my Rorschach response) of this quote shortly.
4. A number of critics complained that in addition to the diversity of gender expression found among transgender people, Burkett neglected class differences, problems of extreme discrimination and battles with an inconsistent, uneducated and all too often hostile health care system. To be sure, some noted that Caitlyn Jenner was guilty of the same neglect. Nor did I express these concerns, even though they are among the most urgent of all to focus on.
5. Finally, many critics, both in tweets to me and in longer form responses to Burkett argued that she (and I) should "go after the fashion industry" for creating the kinds of expectations of femininity that Jenner's photo shoot so successfully lived up to; or, we should "blame the media" rather than Jenner for the hoopla surrounding her coming out. Here I am more ambivalent. On the one hand the fashion industry plays an important role in constructing cultural presentations of femininity (and masculinity) and I have criticized these in the past whether applied to cis or trans men, women, boys and girls. On the other, one of the key points about Caitlyn Jenner, distinguishing her from most other transgender people, is that she had choices about how and where to present herself and actively chose the extraordinary Vanity Fair rollout.

Furthermore, she is not naïve to the use of the media. Starting with her role as an Olympian spokesperson, through her participation in "Keeping up with the Kardashians", and on to her to-be-aired E! "I am Cait" "docuseries", Jenner has proven herself to be a savvy salesperson and entertainer. Although the media should be justly criticized for its construction and exploitation of gender (again, when applied to cis as well as trans women), Jenner also intentionally decided on her very public portrayal of being a transgender woman.

Now let me return to the Burkett phrases that evoked such an immediate reaction from me. First, "they haven't traveled through the world as women and been shaped by all that this entails": for the last 25 years of my academic career I have argued for a developmental account of gender. I don't see gender as something you have, or are (in a static sense) but as a process. It often maintains a stable manifestation but can modulate or change dramatically over time. One is not born with it. In infants it develops in the microcontext of individual physiology interacting with the sensory experiences of touch, smell, sight, sound and movement as well as the cultural contexts of gender both in the family and in the larger culture. Developmentally, it usually takes shape in the first five years of life, but continues to evolve over the entire life cycle. The body develops a history that is at once cultural and biological; thus it matters to what kind of a woman one becomes whether one was once a male Olympic athlete, whether one once experienced the privileges of masculinity, or whether one has a history of being seen as and treated as and presented as a woman. It would have been fascinating to hear Caitlyn Jenner talk about how her history has shaped her present, or how her present built on her history, but her narrative did not reflect on such matters. I hope she will in the future.

The well-publicized and more socially (cis) sanctioned versions of trans women such as Christine Jorgenson, Jan Morrison, and Dierdre McClosky embrace an extreme binary. Their versions of the feminine, and the version of femininity that Jenner seems to have embraced, is their definitional right, of course, but it clashes glaringly with the feminism I have espoused over 50 years, which has aimed to create spectra of possibilities and diminish binaries. This contrast accounts for my positive response to Burkett's phrase "Their truth is not my truth. Their female identities are not my female identity". I do not identify with the culturally feminine. I don't wear make-up or high heels or dresses. I have always viewed the dominant presentation of the feminine woman--as someone physically weak, dependent and physically impeded by tight clothing and high heels--as disempowering (pace Julia Serrano). My feminism, instead, has been shaped by the fight for financial independence, the legalization of birth control, and an end to back-alley abortions.

The Jenner rollout seems to fall into the earlier binary narrative mold. I found it disturbing both because I still embody my earlier histories of struggle against a disempowering femininity and because I was aware of the degree of gender diversity now found in the trans world. The visual pin-up-girl presentation of the ultra-feminine Caitlyn Jenner in the pages of Vanity Fair did not fill my heart with joy. After my fateful tweets some of my correspondents directed me to Julia Serrano's defense of femininity and I am struggling both to understand her position and to decide whether I agree with it or whether it is possible to embrace parts of it. Any account of that effort remains for a future blog.

The third Burkett line I tweeted reads "people who haven't lived their whole lives as women shouldn't get to define us". With the passage of a little time, I have no problem pedaling back from this one. None of us, cis, trans, highly feminine, highly masculine or anywhere in between have the right to define some single standard or version of what it is to be a woman. Jenner did not verbally assert a hegemonic presentation of womanhood or of the feminine, but in the moment of the media barrage, the interview, and Annie Leibovitz's masterful photography, it briefly felt that she was, nevertheless, being prescriptive. In conclusion: there are many ways of being male or female, masculine or feminine. And many trans people are pioneers in widening the spectrum of gender expression along which we live our lives. Jenner, herself has done a service by bringing one transgender life into public view. May more trans diversity become visible and the most pressing problems of violence and employment gain the notice they deserve.