They're coming for me...

On November 26, a Pittsburgh taxi driver was shot by a man spewing anti-Muslim screed.

On November 27, Robert Dear quoted Carly Fiorina's lies about Planned Parenthood videos as he was arrested after shooting twelve people in Colorado Springs.

On December 10, my friend George Zander died. On November 3, as he and his husband left a gay bar in Palm Springs, they were attacked by men shouting homophobic slurs. George had severe injuries and five weeks later he died. The cause of death is as of yet undetermined, but if a 71-year-old man is severely beaten, even if the official cause is "natural causes," no one can deny that this gay bashing hastened his end.

It's not paranoia to think they're coming for me, when as the above, very abbreviated list of hate crimes makes it clear, they are.

Last month Ted Cruz, Mike Huckabee and Bobby Jindal all took the microphone at the National Religious Liberties Conference where one of the agenda items was death to gay people. Rick Santorum has regularly expressed his disdain for gay people as untermenschen.

When I was growing up, my great-aunt and uncle lived around the corner from us. They filled the role of grandparents for my siblings and me since we were somewhat lacking in that department. Uncle Elmer's parents were from Germany. My aunt told me Uncle Elmer had a shortwave radio and in the 1930s, he and his parents would listen to Hitler's broadcasts and laugh at that lunatic. They mocked his accent--he was Austrian and spoke an odd brand of German--and they were sure no one would take his goofy rants seriously. Forty million dead later, I wish someone had taken that Austrian clown seriously.

On September 12, 2001, I got a call from a Pakistani friend. He was crying. He was a student at San Diego State and as he walked across campus in the hours following the 9/11 attacks, he was heckled and threatened. He is dark-skinned, and yes, raised a Muslim. But he said, "Do they not get it? I am gay. If I go back to Pakistan, or any Muslim country, I will be killed. I have more at stake wanting to stay in the United States than most people!" But he was blamed for the crimes of fanatics who would just as soon kill him as the people in the World Trade Center.

Because of my gay novel, I get emails and Facebook messages from people all over the world. One young man from Bangladesh had ordered it online four times only to have it seized by the postal authorities each time until he was finally able to get it through Amazon India. Yes, on paper he is Muslim, but he would give anything to get out of a country where that religion tries to dictate what he can read.

Speech has consequences whether it leads to attacking people in America who are different or closing our borders to refugees because they come from a group that is under suspicion. When Trump, Fiorina, Cruz, Huckabee, Santorum, Jindal, et al. foment hate and intolerance, we all have a duty to speak out before their words inspire more violence. As I watched video of Trump's followers beat a black man at a rally and Trump justifying it, I can't help but feel I've traveled back in time to Nuremberg circa 1933.

It may be about Mexicans yesterday. Gays today. Muslims tomorrow. But as the Reverend Niemoller assured us, each of our days will come. If we do not stand together against hate, we can each die individually as its accomplices. 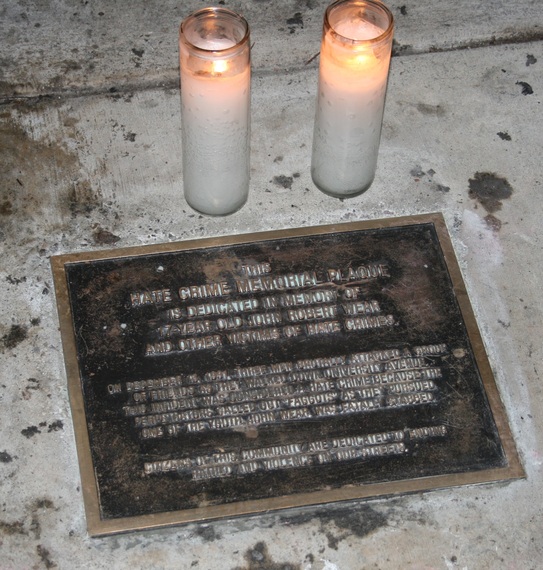 A plaque in the sidewalk commemorates that last fatal gay bashing in San Diego. 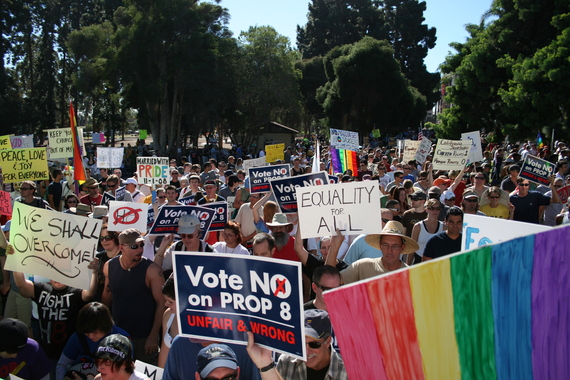 A rally against the hate of Prop 8 in California.