Here's the dilemma we face as progressives and as a country. The Republicans have been captured by the far right. Ordinarily, that would be good news for Democrats. The Republicans may well nominate someone too crazy for most Americans to vote for. There is also the beginning of a serious backlash against the Tea Party among the general electorate (though not among the Republican base).

Through the smog of rhetoric and demagoguery, more and more Americans are coming to correctly blame Republicans for the obstructionism on the budget agreement that helped trigger panic in financial markets. With so many far-right Republicans having picked up House seats in the 2010 midterm, the election of 2012 could be a good year for a Democratic comeback.

The only problem is that we have our own albatross in the White House. Barack Obama is not likely to have coattails. And his own strategy for dealing with prolonged stagnation neither motivates voters nor fixes what ails the economy. Oh, and it divides his own party. Talk to elected Democrats on the subject of Obama off the record, and you get unprintable rage.

The New York Times had an important piece Sunday, pointing to some of the differences among White House advisers. According to the article, the two top advisers, chief of Staff Bill Daley and senior political adviser David Plouffe, are totally in the deficit-hawk camp, and those advisers like Christina Romer and Jared Bernstein who wanted to give more priority to jobs have departed. The piece is worth quoting in detail.

"Playing it safe is not going to cut it," said Ms. Romer, a professor of economics at the University of California, Berkeley. "Not proposing anything bold and not trying to do something to definitively deal with our problems would mean that we're going to have another year and a half like the last year and a half -- and then it's awfully hard to get re-elected."

But there is little support for such an approach inside the administration. A series of departures has left few economists among Mr. Obama's senior advisers. Several of his political advisers are skeptical about the merits of stimulus spending, and they are certain about the politics: voters do not like it.

Mr. Plouffe and Mr. Daley share the view that a focus on deficit reduction is an economic and political imperative, according to people who have spoken with them. Voters believe that paying down the debt will help the economy, and the White House agrees, although it wants to avoid cutting too much spending while the economy remains weak.

As part of this appeal to centrist voters, the president intends to continue his push for a so-called grand bargain on deficit reduction -- a deal with Republicans to make even larger spending cuts, including to the social safety net, in exchange for some revenue increases -- despite the strong opposition of Congressional Democrats who want to use the issue to draw contrasts with Republicans."

But if the voters believe that paying down the debt will help the economy, they are misinformed. No serious economist believes that more fiscal contraction in an economy on the brink of a second recession will create a recovery. The Fed has now made an unprecedented pledge to keep interest rates at close to zero for two years, and that has only moderated the slide a bit. Cutting spending will deepen the recession. So will raising taxes, unless that money -- and more -- is plowed back into economic stimulus and job creation.

What's appalling about Obama and his crew is that they have forgotten the role of leadership, and are simply going where the polls show voters currently are.

But as any good politician knows, real people don't wake up in the morning fretting about the national debt. They worry about their jobs, their health insurance, their retirement savings, the costs of sending their kids to college. The national debt is a vague proxy for worry about the state of the economy and the fact that Washington doesn't seem to be helping.

Think of the great acts of leadership by past presidents. Roosevelt himself started out as a deficit hawk. He had to alter his own thinking and then lead public opinion to appreciate that large public works programs reduced unemployment (and temporarily increased public deficits, but that was okay). He also had to lead public opinion when he called for rearmament and the first peacetime draft and lend-lease aid to Britain, because he foresaw war with Hitler. If Roosevelt had just followed polls, Nazis might well be still governing in Berlin.

Do you think Lyndon Johnson was guided by polls when he risked his presidency on enacting landmark civil rights legislation? Support for a greater federal role in desegregation was very lukewarm when Johnson succeeded the assassinated John Kennedy.

But great presidents lead. Obama seems to be taking the advice of Plouffe and Daley to follow. Even worse, their advice is wrong on the merits. Obama may think he is doing the brave and unpopular thing by calling for belt-tightening in a recession. But that is bravery on behalf of a fool's errand.

Obama may yet be saved by the sheer extremism of the likely Republican nominee. But we should not bet the farm on that either. I vividly remember being reassured that Ronald Reagan was too far-right, and George W. Bush too dumb, to be elected. So much for that theory.

Is there other possible good news? I can recommend is a smart piece by political scientist Andrew Hacker in a recent New York Review of Books arguing that maybe we shouldn't be so pessimistic because the electorate that voted in a Republican House was much smaller, whiter, and older than the one that elected Obama in 2008 and that will likely vote in 2012. In fact, Obama in 2008 received some 25 million votes more than Republican House members did in 2010. 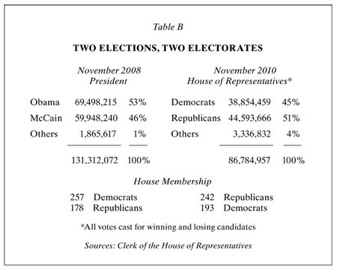 This suggests a basis for some optimism -- until you realize that the 18-year-olds who voted for Obama with such enthusiasm in 2008 will be 22-year-olds looking for jobs in 2012. Do you think there will be anything like the energy, excitement, and hope there was the first time around? Only if our president reverses course.

There is a whole, depressing genre of commentary that goes, "Here's what Obama needs to do." Well, gentle reader, he isn't reading these columns and he isn't going to do it.

If we are to be saved from wall-to-wall Republican government, or from four more years of Obama-as-Hoover, we will need to make it happen -- with campaigns for progressives for Congress and backing for our president that is not unconditional.

Beyond that strategy lie desperation moves like sitting out the 2008 presidential or even voting Republican in the hope that a progressive Democrat takes it back in 2016, or recruiting a candidate to challenge Obama in a primary. I'm not there yet. But I have to say Obama is doing just about everything he can to depress people who were so excited about him in 2008.

This is the hand history has dealt us. And a pretty lousy one it is.

Robert Kuttner is co-editor of The American Prospect and a Senior Fellow at Demos. His latest book is A Presidency in Peril.