News broke this week that a Blackwater subsidiary was arming violent drug users in Afghanistan. They took hundreds of weapons intended for the Afghan National Police and at least one of them (probably more) signed for the shipments with the name "Eric Cartman."

When I asked "South Parks"'s creators what they thought of these men co-opting their character they were completely unfazed. "It makes perfect sense. It's the name I would use," Trey Parker said. "Our first reaction to any story is 'How do we put this into the show?' and the second reaction is 'Did Cartman do that?' because he's so real to us it's like 'I bet Cartman did that.'"

"I saw that and thought, 'Wow, Cartman did that? That's pretty cool. Sounds like something he would do,'" Matt Stone agreed.

Eric Cartman, the trash-talking, anti-Semitic, youngster who is one of the four main characters of their show, is the "shitty part" of Matt and Trey according to them. "There's a big part of me that's Eric Cartman. He's both of our dark sides, [he says] the things we'd never say," Parker told me.

"I think Comedy Central totally fucking pussed out. Now, they weren't any different than anyone else, so it's not like you can single them out. But I think it would've been an important statement for one media outlet in America to stand up. That was one of my most disappointing moments as an American--the American press's reaction to the Muhammad cartoons. It was completely wimpy," Matt Stone said. "Cartoonists, people who do satire--we're not in the army, we're never going to be fucking drafted and this is our time to stand up and do the right thing. And to watch the New York Times, Comedy Central, everybody just go 'No, we're not going to do it because basically we're afraid of getting bombed' sucked. I was so disappointed"

The irony of it all? The pair did a show that included an image of Muhammad years before and a clip of it (pictured below) runs during the show's opening in dozens of countries, in syndication, on Comedy Central.

They've also been attacked by every religious group possible, but never asked to back off before, even when they stabbed Jesus in the neck and made all Catholic priests pedophiles. They said despite all that the most vocal group about religion has been atheists. "We got calls from atheists friends a couple times saying, 'What the fuck, we thought you were on our side?' and we say, 'We're not on anybody's fucking side and we're not atheists.'" 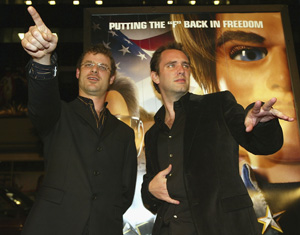 When I asked them which group they've pissed off the most over the years, they both said "liberals." "Liberal people got mad at us for 'Team America' -- that's the most I've felt it. [The movie] came out right before the Bush/Kerry election and I think we fucked up. I don't think we should've timed it that way," Matt explained. "Because it came out right before the election, liberals were waiting for it as this big anti-Bush statement, and there's plenty of stuff in there that is anti-Bush, but we never would've spent three years of our lives making a movie just to make a statement two weeks before the election. Some people felt like it was a big betrayal."

Much has been written about the politics behind "South Park" and what ideologies these men subscribe to. In 2005 a book was even released called "South Park Conservatives," arguing that Matt and Trey embody the modern revolt against the liberal media and all it breeds. What do they think of that?

"It was just lame, that's exactly what we're talking about--people trying to claim the show," said Matt, who in 2005 announced "I hate conservatives, but I really fucking hate liberals." When I asked him about the quote, Trey responded, "It's all based on saying the shocking thing. We used to have a great time going to Hollywood parties and saying 'I think George Bush is doing a great job.' We'd clear out the room. I used to love it."

Both men were adamant that the show has no political affiliation. "I would never want the show to be a Democrat show or Republican show, because for us the show's more important than that. It isn't for everybody else in the world, but it is for us. We don't want you to come to it thinking, 'These guys are going to bash liberals,'" Matt explained.

"I look at it like this," Trey added. "I have a cat, I love my cat and it's like someone coming in and saying, 'Hey, is that cat a Republican or a Democrat?' He's my fucking cat, leave him alone."

"We did a show last season called 'Whale Whores' about the 'Whale Wars' guys. Everyone is against whaling, we're not into killing whales, but if you watch ['Whale Wars'] it's horrible--super fucking boring--and if you watch that show for long enough you will hate the people in it. They say on the show, 'We will lie for our political ends.' They SAY that. So our whole show was basically, 'Fuck you, you guys are liars.' I don't fucking care if it's in service of saving whales, you're liars. But we got a thank you letter from them and an environmental award. There's NOTHING about the environment in that show...but it doesn't matter, everyone sees their own thing in it. So a lot of our shows where even we think we've taken a very deliberate stand, liberals say, 'That's awesome, you took on the conservatives' same show and conservatives say 'That's awesome, you took on liberals.'" 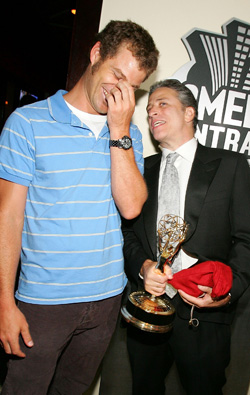 They have certainly mocked conservative groups and people on their show, but they tend to skewer liberals more often. Why? "Ripping on Republicans is not that fun for us only because everyone else does it," Matt explained. "It's so much more fun for us to rip on liberals only because nobody else does it, and not because we think liberals are worse than Republicans but, just because..."

"..it's like fresh snow. I mean how're you gonna rip on Sarah Palin in a new way?" Trey pointed out.

"I think sometimes we do gravitate towards things other people haven't done and a lot of times that makes us gravitate away from ripping on Republicans cause it's just done very well by a ton of people. It's hard to compete with Jon Stewart, etc -- those guys are brilliant."

More than political figures, the men tend to target celebrities. "There's something uniquely aggravating about the smugness of liberal Hollywood," Matt said. "You have to laugh at Alec Baldwin when he gets political. You have to. He is an amazing actor, he may even be a great guy, but that shit is funny. Sean Penn getting on TV on CNN and talking about politics, Sean Penn running around Katrina and Haiti that is funny. That's all. That's fucking funny. And we're going to make fun of you, Sean Penn."

"Giant douchebag with legs running around Haiti = funny," Trey added. I asked the men which celebrity had the craziest reaction out of any they mocked.

"Well the craziest was probably Kanye last year. We thought we would be more like 'Holy shit should I get a body guard? Should I get a gun?' and instead the next day he wrote in all caps 'YEAH YOU GUYS ARE RIGHT. I'M SORRY,'" Matt said in wonder.

"We were like 'Dude, what?' and for the first time it made us feel bad. If Sean Penn is like, 'Hey what do they think they're doing,'" Trey said in a voice halfway between Cartman and Penn, "We're just like, 'Hey dude, fuck you.' But for someone to actually say, 'Yeah it really hurt my feelings and I really should look at myself,' it's kind of like punching the kid and then he just sits there and cries."