WASHINGTON -- On Wednesday, President Obama is scheduled to pardon one of two 19-week-old, Virginia-raised, 40-pound male turkeys, otherwise known as toms, or gobblers.

Before their pardon, the chosen fowl -- Cobbler and Gobbler; one to be pardoned, the other a spare -- will spend a couple of days in a suite at the luxurious W Hotel near the White House. After their pardon, the turkeys are normally transported by horse-drawn carriage to George Washington's Virginia estate, where they -- along with a camel named Aladdin -- become part of the Mount Vernon Christmas display.

While the horse-drawn carriage has been canceled this year, the display is still scheduled to go on view Wednesday and last until Jan. 6. But what will happen to the turkeys after that?

The Huffington Post checked on the fates of previously pardoned turkeys. Sensitive animal lovers may not want to read on.

It's not totally clear when or with whom the tradition of presidents pardoning turkeys began. For example, while the National Park Service states definitively that Abraham Lincoln spared the life of a Thanksgiving turkey, the White House's "Definitive History of the Presidential Turkey Pardon" claims less certainty. (The magazine Mental Floss traced the various myths and legends surrounding White House turkey pardons.)

The National Turkey Federation has been presenting turkeys to the White House since 1947, and while some of these turkeys were granted ad hoc clemency -- just days before his assassination, John F. Kennedy did right by his donated turkey -- the yearly pardon only took hold in 1989.

President George H.W. Bush was the first to actually offer a turkey pardon. On November 14, 1989, he announced that year’s bird had “been granted a presidential pardon as of right now.” He sent the turkey on his way to the perhaps unfortunately named Frying Pan Park in Herndon, Virginia, and with that, a tradition was born.

Northern Virginia's Frying Pan Park -- more recently in the news when some gentle farm animals were viciously attacked there earlier this year -- received the White House turkeys until 2004.

In 2005, the two pardoned birds -- Marshmallow and Yam -- were "a little skeptical about going to a place called Frying Pan Park," said then-President George W. Bush. "I don't blame them."

No one, in fact, would have blamed them. Frying Pan Park's birds all died quickly. They had a "short retirement," says Frying Pan Park spokeswoman Judy Pedersen, having "come relatively mature."

Beginning in 2005, pardoned birds decamped for sunnier retirement homes. Every bird was removed to Disneyland or Walt Disney World where they were honorary grand marshals at the Thanksgiving Day Parade until 2010:

Per the Orange County Register:

After five years, Disney has decided to stop housing the National Thanksgiving Turkey and an understudy after they are pardoned by the president. Following the traditional ceremony, an official turkey has served as the grand marshal in a Thanksgiving parade and then lived at Disney parks since 2005.

“It’s been a wonderful partnership. We’ve had a lot of fun doing it. We’re just not continuing with that,” said Suzi Brown, a Disneyland Resort spokeswoman.

Not everyone thought this partnership was so wonderful. In 2009, animal rights group Farm Sanctuary asked that birds no longer be sent to the Magic Kingdom on account of its high mortality rate, reported Mother Nature Network:

According to Farm Sanctuary, at least half of the turkeys that have been sent to Disney have died within one year of arrival.

Because modern commercially bred turkeys have been genetically manipulated for decades, they are prone to serious health issues that require specialized care. Disney’s track record shows that it simply is not able to provide the level of care necessary to keep these birds healthy, happy and comfortable for years.
One of the issues is the feed that the turkeys are given.

The turkeys are fed a “high-calorie, high-fat diet formulated for rapid weight gain” that may be responsible for their early deaths.

Disneyland Resort spokesman John McClintock, however, says at least three of Disney's pardoned turkeys are still alive, thanks to a special diet devised by Disney animal keepers that has allowed them longevity beyond their expected one to two years.

"They're not bred to live a long time," says McClintock. "These turkeys are bred for Thanksgiving."

Farm Sanctuary still thought they could do better -- nurturing the birds into four or five years of life -- and asked Obama to send pardoned turkeys to its 175-acre refuge in Seneca Lake, N.Y.. He didn't.

Another appealing offer: Wild Turkey Bourbon has asked to host a pardoned turkey as an official spokesbird.

"Here at the Wild Turkey distillery we have about 750 acres that we could take good care of the turkeys on," says master distiller Jimmy Russell. "There's no better setting in the world."

But instead of flying off to second acts as spokesbirds or parade grand marshals, since 2010 the pardoned turkeys been leaving the White House for what is arguably the most patriotic place in the United States: Mount Vernon, George Washington's Northern Virginia home.

Assuming all goes as planned, President Obama will issue the annual turkey pardon this week. Then the birds will be on public view as part of the “Christmas at Mount Vernon” exhibition, with the camel named Aladdin. (George Washington was a fan of exotic animals, and brought a camel to Mount Vernon at Christmastime in 1787. He did not, however, issue his 1789 Thanksgiving Proclamation there.)

After that? Cobbler and Gobbler will no longer be on display -- they are then housed in Mount Vernon's livestock facility, which isn't open to the public -- but they may, just may, stay alive long enough to meet 2013's pardoned turkeys.

And while one of the 2011 turkeys, Peace, was euthanized just days before the 2012 pardoning, as of Tuesday afternoon, the other, Liberty, is "alive and well ... [and] very vocal," says Rebecca Aloisi, another Mount Vernon spokeswoman. He "laughs at jokes, I'm told."

Learn more about this year's turkeys here, learn about how the pardoned turkey is chosen here, and below you can check out 2011's White House turkeys: 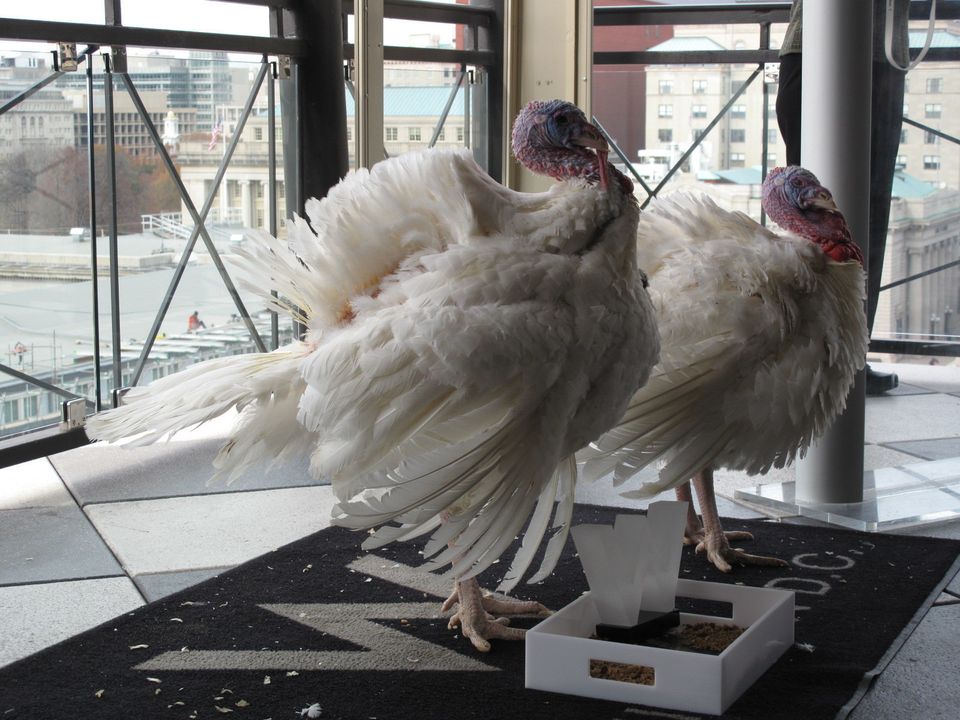 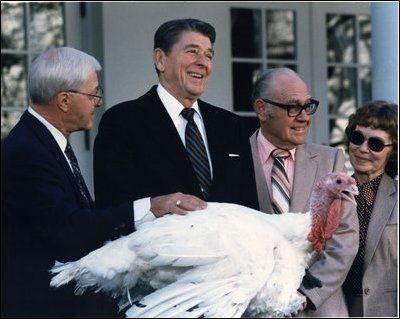 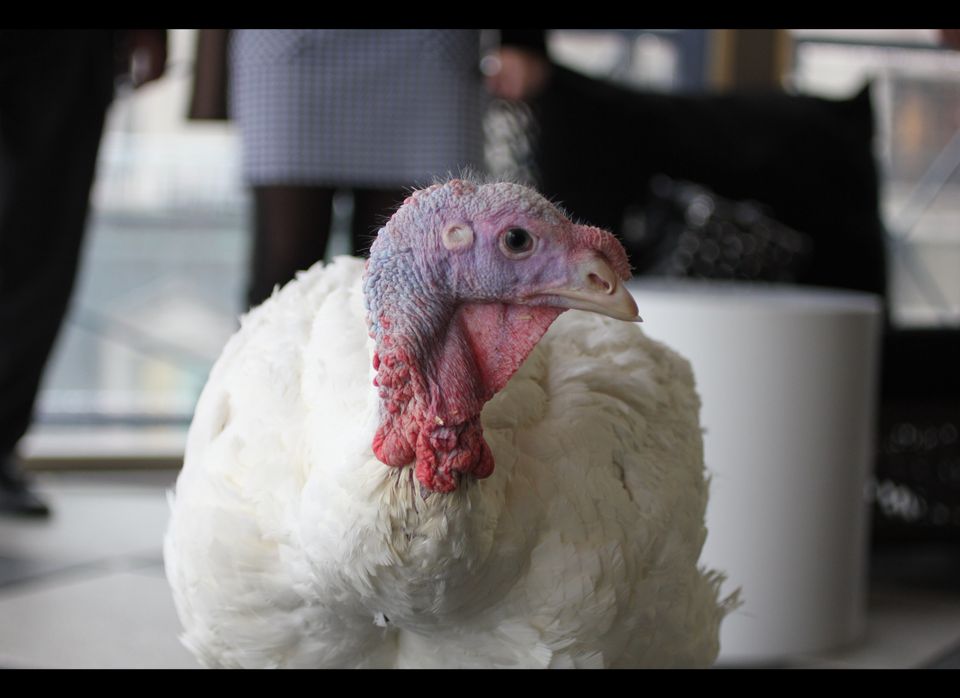